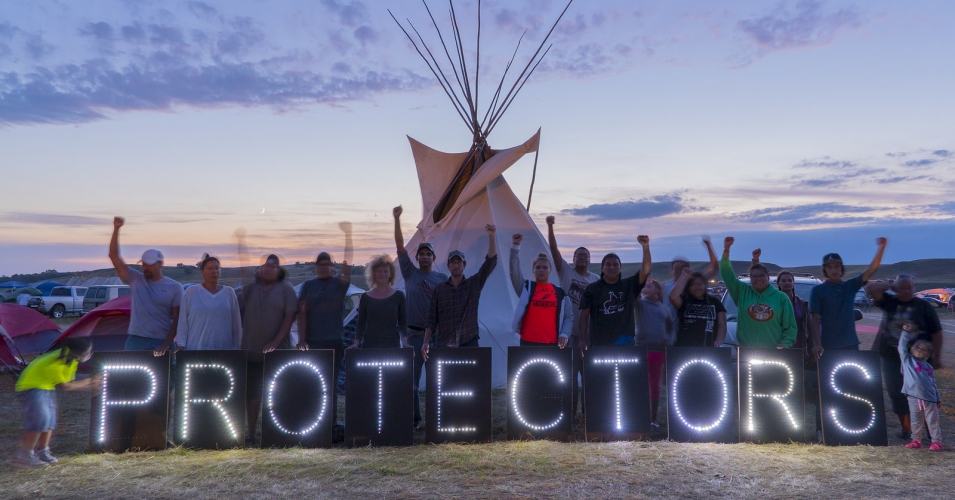 The struggle to stop construction of the Dakota Access Pipeline marks not only a difference in economic policies but a contest between two radically different orientations to life. The struggle, which pits Native Americans and their allies against a company that constructs oil pipelines, has a profound significance that extends far beyond the plains of Standing Rock. The contest is both ethical and existential, and how it is resolved may well determine the future of human life, whether for harm or for good, on this beautiful but fragile planet.

On one side of the conflict stands Energy Transfer Partners, the corporation that is building the pipeline. If completed, the pipeline will extend 1,200 miles and will transport approximately 500,000 barrels daily of Bakken crude oil from North Dakota to existing pipelines in Illinois, from where it will reach markets in the Midwest, the East Coast, and the South. The pipeline will thus be a vital artery in maintaining an economy powered by fossil fuels. Construction of the pipeline, however, cuts across land sacred to the Standing Rock Sioux tribe—land they claim was recognized as theirs by the US government in a treaty going back to 1851. Moreover, the pipeline does not merely cross sacred land. If construction continues, it would pass beneath the Missouri River, putting at risk the water supply of the Native Americans and millions of other people living downstream who also depend on the river for their water.

So far, environmental assessment of the pipeline’s impact has been called “seriously deficient.” Such a hasty assessment is precarious enough, but even when they have passed rigorous scrutiny, oil pipelines have split, leaked, and even exploded, sometimes seriously enough to pollute the waters they traverse and leave behind a trail of toxic waste. These chemical spills are far from innocuous. For those living close by, the pollution has caused cancer, strange illnesses, permanent disabilities, and premature death. Birth defects and childhood leukemia are also possible dangers caused by exposure.

The pipeline represents a worldview that sees the earth as in essence a source of raw materials to service our economy. From this perspective, humanity’s task is to exploit the earth and bend it to our purposes, primarily the production of commodities to feed the fickle appetites of a consumerist culture. It is a worldview that prioritizes monetary profit over a vibrant planet; that puts immediate gain over the needs of future generations; that commodifies everything it sees and looks with disdain at the very idea of the sacred.

Those who subscribe to this worldview give little heed to population groups outside the citadels of corporate wealth and power. Without concern for the consequences, they would extract and market all the oil they can find for the purpose of enhancing the company’s bottom line. The results of such a worldview appear in the once-fertile lands that are turning into deserts, in the transformation of seasonal rains into irrepressible floods, in the long droughts and brutal heat waves, in the threat to the world’s food supply. The results are also manifest in the movements of people who choose to migrate from their traditional homelands to strange and sometimes hostile countries, preferring a dangerous sea passage to the risks of drought and famine.

Those arrayed against the pipeline—the Native Americans and their allies—hold a different worldview that entails a different set of priorities. This is a worldview that esteems life values over market values. It is a worldview that understands water is the source of life, an irreplaceable substance far more essential than petroleum. It recognizes that, with sufficient funding and political will, we can obtain all the energy we need from the sun and wind and geothermal sources. And it sees the ideal relationship of humankind to the earth to be one of care, stewardship, and reverence rather than reckless exploitation.

The stakes in this struggle are high. Deep ramifications lie just below the surface, beneath the daily skirmishes that erupt between the pipeline staff and the water protectors. Although the Dakota Access Pipeline can be viewed as just one pipeline among a multitude of others, circumstances have turned the project into a symbol for the crossroads at which humanity has finally arrived, the juncture where the road of energy development branches off in two different directions. If we stand up against the demands of Big Oil and reject the pipeline, we can pivot away from the old economy that feeds on the resources of the earth toward a new system that offers untapped promise. We can turn away from the barren moonscapes of destruction, away from the maltreatment of peoples whose lands are stripped from their hands, whose lives are ruined by oil spills and pools of toxic waste. We can stop heating up the planet in ways that imperil the future of humankind. By shifting to a new worldview, we can hasten the emergence of an economy that promotes a shared prosperity within the limits of the biosphere. We can adopt a new outlook on the earth, one that reveres the majesty of its mountains, the splendor of its forests, the sanctity of its natural rhythms.

The choice between these two orientations has grown starker over the past decade, ever since the reality of climate change impinged on public consciousness. The two alternatives have come to a head at Standing Rock. Denial is no longer tenable. Either we go on burning fossil fuels without concern for the impact, or we finally say, “It’s time to change course.” The choice now rests with President Obama. It’s up to him to show courage. It’s up to him to choose wisely, mindfully, and compassionately. And we can let him know what we want. We can send him a petition asking him to reject the Dakota Access Pipeline, to reject it once and for all. Let’s act skillfully, remembering that our future is at stake, that our action now affects generations as yet unborn, both in America and throughout the world.

Ven. Bhikkhu Bodhi is a Buddhist scholar and translator of Buddhist texts. He is also the founder and chair of Buddhist Global Relief, a charity dedicated to helping communities around the world afflicted by chronic hunger and malnutrition. He can be reached at: venbodhi [at] gmail [dot] com.