With Humanity on the Brink, Should We Trust Deterrence Theory or Disarmament? 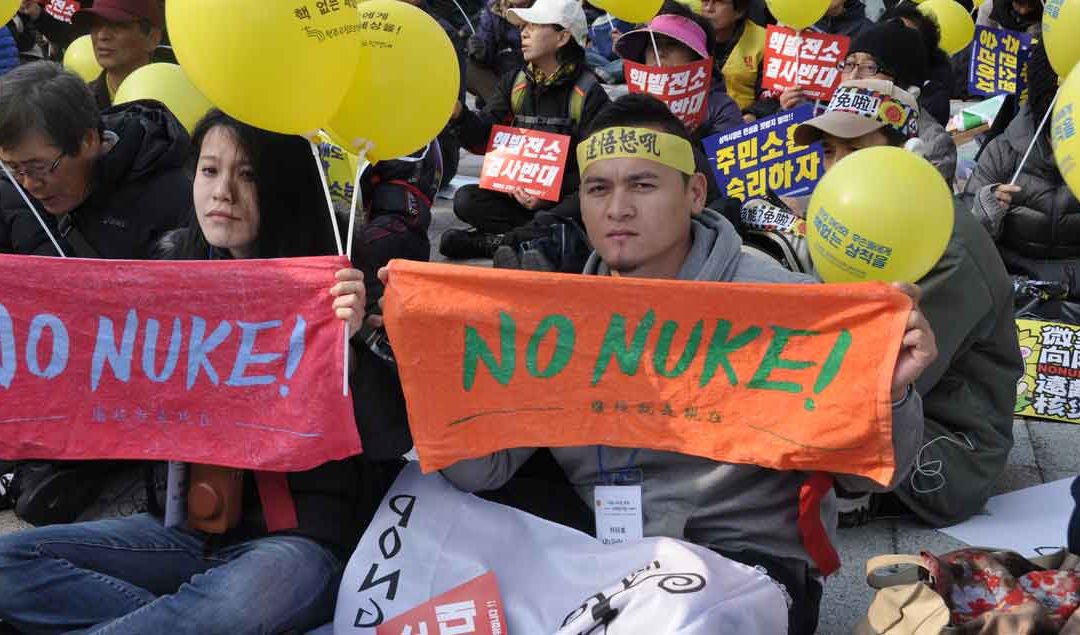 Humanity should not be held hostage to uncertain, speculative considerations of what exactly will deter nuclear-armed rivals from taking steps that could escalate to Armageddon.

On Monday, the Pentagon announced the US will soon begin training the Ukrainian military in using howitzer artillery in an unnamed country. Presumably this will be in a NATO member state. If Russian intelligence found out where, might it attack to stop the howitzers from being deployed against Russian forces in Ukraine? Almost assuredly not, as that would trigger a wider war, invoking NATO’s self-defense provision, which would be catastrophic for Russia.

So, while the urgent focus should be on diplomatic negotiations to end this senseless war, arming Ukraine to defend itself in the meantime tacitly rests on conventional deterrence theory, assuming Russia will be deterred from certain aggressive actions, not wanting to risk a war with the NATO alliance.

But do we really know where Russia’s “red lines” are? Russian President Vladimir Putin may soon be desperate, or at least under serious pressure. The war isn’t going as easily as he thought it would, tens of thousands of Russians have been jailed for protesting his abomination, and maybe some in his inner circle might think it time to usher him out of the Kremlin, to a foreign country that would take him and his money.

Obviously, the risk of miscalculation and escalation in wartime is high. Deterrence theory, which is little discussed, depends on not just knowing the military capabilities of the adversary, but estimating its mindset, especially how it will react to unpredictable circumstances.

So, as the US and the West provide weapons and other forms of defense or intelligence support to Ukraine, military and civilian leaders must guesstimate what Russia’s response will be. To not do so, or to rely on the mistaken notion of escalation dominance, that our military superiority would allow us to prevail at any level the conflict might escalate to, would be reckless. (Russia appears to have made this mistake in its attack on Ukraine, though hopefully we won’t find out, as further escalation could be catastrophic.)

For now, confidence may be relatively high Russia will not risk a wider war with NATO and the US. However, Putin made a thinly veiled nuclear threat early on in the conflict, and a French official reciprocated. And Russia’s nuclear policies include possible first-strike use of short range, tactical nuclear weapons.

When the thousands of nuclear weapons of both sides (including not just the US and Russia, but also those of France and Britain, and the estimated hundred or so US nuclear warheads on bombers in Germany, Belgium, The Netherlands, Italy and Turkey) are considered, can we afford to rely on very imprecise notions of what will or won’t deter Russia from taking this or that action? Or, can we be absolutely sure the US or NATO allies won’t miscalculate, over-react or dangerously escalate tensions in response to something Moscow initiates?

Humanity should not be held hostage to uncertain, speculative considerations of what exactly will deter nuclear-armed rivals from taking steps that could escalate to Armageddon.

Again, the focus should be to end this awful war immediately. Officials of the US, UN, Ukraine, Russia, China or whomever might contribute to diplomatic negotiations to save lives need to make this their top priority. Every day this war continues is a pointless tragedy, especially as the likely outcome is already known—Ukraine will not join NATO (though Finland might, certainly not what Russia calculated), Russia will likely keep Crimea, and some form of independence will be formalized for the two self-proclaimed republics in the Donbas region.

Assuming responsible adults in governments can walk and chew gum at the same time, steps to address nuclear dangers all around are also urgent. Though seemingly side issues, de-escalation by the US and Russia, to reduce any chance of the use of even “smaller” nuclear weapons, could not only lessen that potential, but might even contribute to ending the war. There may be a face-saving value in this to Putin, though that is a secondary concern.

Further steps are needed, including ending the sole authority for a US president, or any executive of a nuclear weapons state, to decide to launch nuclear weapons. Harvard Professor Elaine Scarry’s book Thermonuclear Monarchy:Choosing Between Democracy and Doom, makes the simple but compelling case that allowing one person (currently all men in the Nuclear Nine) to initiate a nuclear war that could end most if not all life on Earth makes a mockery of whatever notions of democracy we think we have attained. In the US, there is a proposal to end such sole authority for the president, requiring a Congressional declaration of war before a president could launch nukes.

All the nuclear weapons states, starting with Russia and the US, are in the initial stages of overhauling and upgrading their entire nuclear arsenals, the exact opposite of what they should be doing, reducing and eliminating them. At a time of a global pandemic and rapidly accelerating climate catastrophe, spending trillions of dollars—in the US alone, this nuclear weapons forever scheme will likely cost $2 trillion of our tax money over the next three decades—to “modernize” nuclear arsenals is the height of irresponsibility. Let’s cancel these handouts to the weapons contractors and put the resources to better use.

The US should start by canceling plans to replace its Intercontinental Ballistic Missiles, and in fact should ditch this leg of the nuclear triad entirely, relying on the less vulnerable nuclear bombers and submarines for the time being as we work to reduce and eliminate nuclear weapons globally. The US and Russia could lead in this regard, either negotiating new arms reduction treaties or making unilateral, reciprocal reductions, as Presidents George H. W. Bush and Mikhail Gorbachev did in 1991.

Lastly, in what seems like another world but is in fact now supported by 86 countries, the Nuclear Nine should join the Treaty on the Prohibition of Nuclear Weapons. Negotiated in 2017 without the support of the nuclear states, the treaty will have its first official meeting of states party to the treaty (and others may attend as observers) in Vienna, Austria in June. The treaty was negotiated not just by nation-states, but also with the participation of civil society organizations.

Taking this path will not likely be quick and easy, and there could be twists and turns and forks along the way. But the current war in Ukraine, status quo of relying on shaky notions of deterrence theory, and upgrading nuclear arsenals instead of reducing and eliminating them, is surely a road to nowhere.