Will We Ever Stop the Drones? 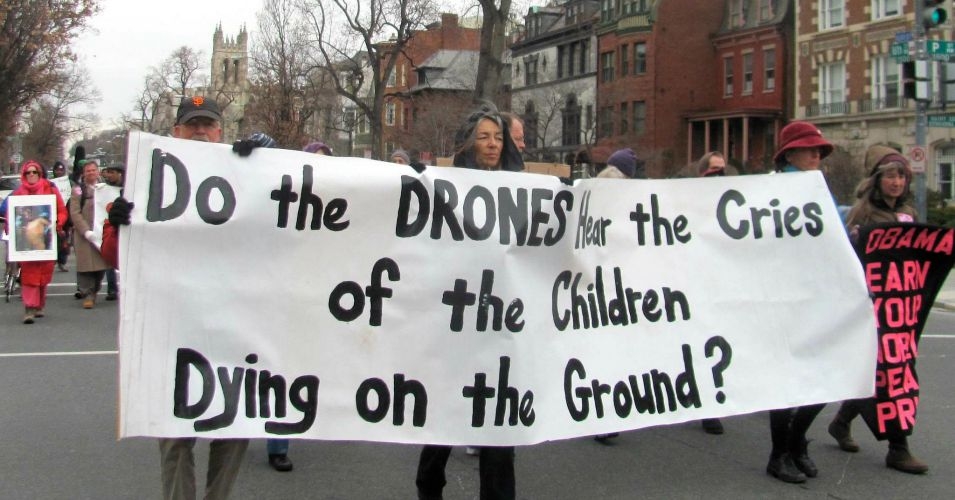 Almost a year after the 2012 election, Florida congressman Alan Grayson decided to hold a hearing. The number of drone attacks were going up not down; sparse news reports from mostly military sources weren’t making much of an impact on the American public.

In October 2013, Grayson decided to invite a Pakistani family who’d experienced an attack themselves to Capitol Hill to address congress directly. On October 29, they came to Washington, including thirteen year old Zubair who was gravely hurt in a U.S. drone attack on his home community.

Zubair had been reluctant to make the journey to the States, for fear he wouldn’t be welcomed here, but the strike that maimed Zubair also killed his beloved grandmother, so welcomed or not, he decided it was important to tell the story. “My grandmother and I used to share a love of bright blue skies,” he began. The sky in their village of Ghundi was particularly blue on Oct. 24, 2012, the day before Eid, the biggest festival of the year, he explained. He and his grandmother were finishing their work in the fields before celebrating. They could see and hear a drone hovering over their heads but they didn’t worry, said Zubair. “Why would I worry? Neither my grandmother nor I were militants.”

When the drone fired the first time the whole ground shook and black smoke rose up. “We ran but several minutes later, the drone fired again,” testified Zubair. He spent Eid as it turned in agony in the hospital. It would take his family months to save for the specialist care that was able to remove the shrapnel from his leg. The drone killed his grandmother in front of him.

As Zubair told the legislators: “I no longer love blue skies. In fact, I now prefer gray skies. The drones do not fly when the skies are gray, and for a short period of time, the mental tension and fear eases… I know that Americans think that drones are the answer,” continued Zubair. “I wish they could understand how I and other children in my community see drones. We used to play outside all the time….now people are afraid to even leave their houses….children have stopped going to the few schools that exist….education isn’t possible as long as the drones circle overhead.”… “I hope by telling you about my village and my grandmother, I can convince you that drones are not the answer, concluded Zubair…. And then he added, ” I hope I can return home with a message… that Americans listened, that America’s not just drones that terrorize us from above but a country that listens and maybe – just maybe – America may soon stop the drones.”

Was Zubair’s trip worth it? Is any body listening? It’s been almost two years. What message do you think is getting to his village?

Laura is YES! Magazine’s 2013 Local Economies Reporting Fellow and is executive producer and founder and host of “GRITtv with Laura Flanders.” Follow her on Twitter@GRITlaura.