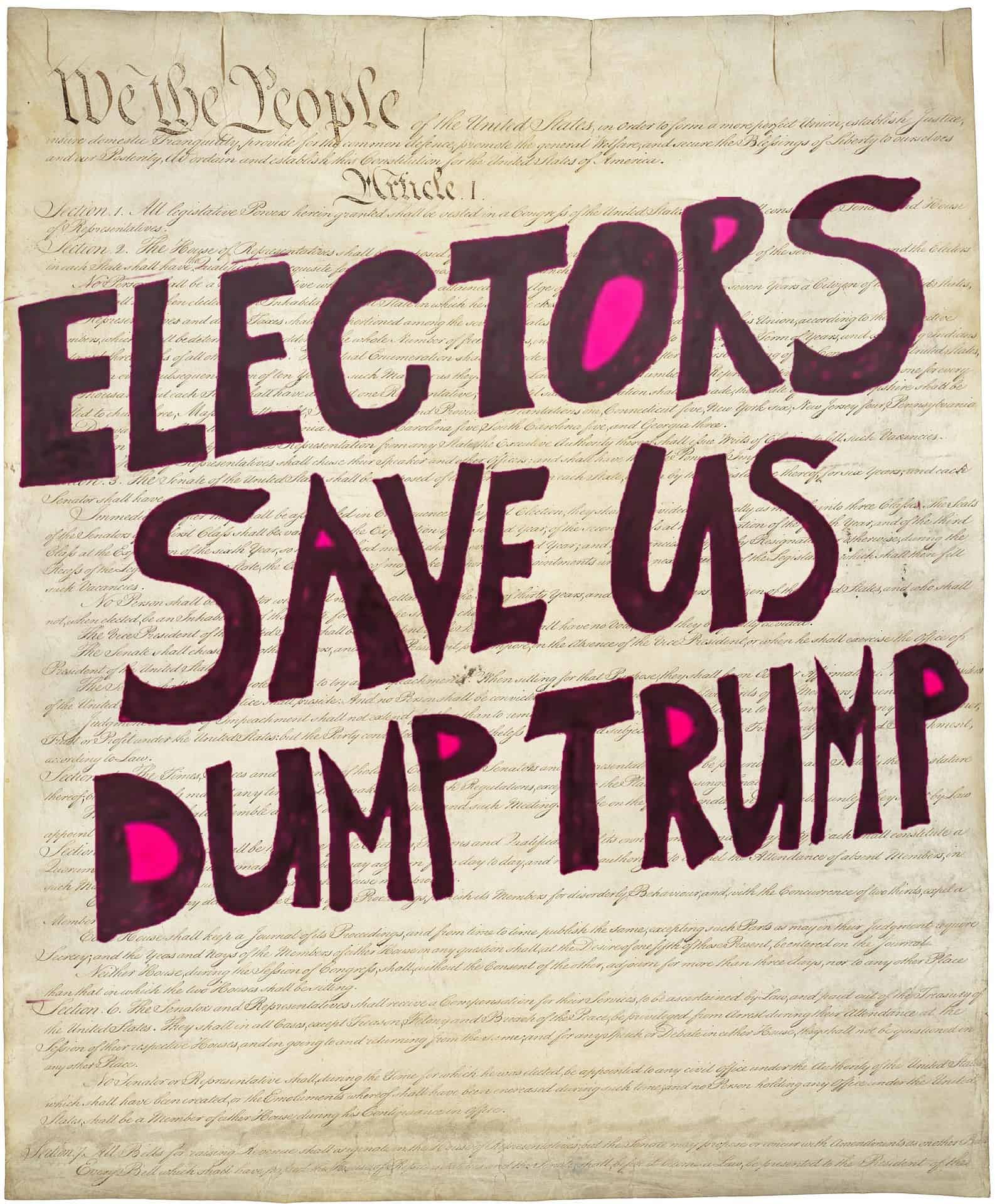 As millions of Americans desperately seek an alternative to Donald Trump, the 2016 presidential election now faces the volatile possibility of a “December Surprise”.

Here are some Constitutional realities:

The Electoral College is set to vote Monday, December 19.

Of 538 electors, Donald Trump apparently has 306 committed to him.  Exactly 270 are needed to win.  Hillary Clinton apparently has 232.  There do not seem to be any other candidates with confirmed committed electors at this point.

The Twelfth Amendment stipulates that if no one gets 270 votes, the decision reverts to the House of Representatives.

But the House would vote state by state, with each delegation getting one vote.  A strong majority of the delegations are controlled by Republicans.

The House can only choose among the top three candidates with actual electoral votes.

So if Trump fails to get 270 votes, but no one else has electoral votes besides Hillary Clinton, the House will still choose between Trump and Clinton.  If 37 electors abandon Trump, but don’t give their votes to Clinton, the only other choice would be whoever has the next highest number of electoral votes.

In other words, the House can’t anoint a candidate that does not have at least one electoral vote.

(There are also complex circumstances whereby the Senate might choose the new vice president, who would become president if no new one is chosen.  At this point, the likeliest nominee might be Mike Pence).

Harvard Professor Lawrence Lessig is offering legal advice to Electors who may want to vote for candidates other than those to whom they are apparently committed.  He has estimated 20 or more electors may jump from voting for Trump.

But so far, the only other candidate named by a possible “faithless elector” from a Trump state is Ohio’s Republican Governor John Kasich.

That elector is Chris Suprun, a Texas-based paramedic who penned an op ed in the New York Times saying Trump is unfit to be president, and mentioning Kasich as someone he might support.

Kasich was one of Trump’s most vehement opponents during the primaries.  He now says he does not want the Electoral College to consider him as an alternative candidate.

Nonetheless, Colorado elector Michael Baca,  who is committed to Hillary Clinton, has told Brad Friedman on his BradBlog radio show that he would consider voting for Kasich if that would help rally Republican electors around a candidate other than Trump. He cites a Hamilton Electors website  aimed at informing the public about the possibility of an Electoral College not voting for the candidate with the apparent majority of electoral votes.

Given the fluidity of the situation, things may have changed between the time I am writing this and the time you are reading it.

But this much seems firm: Hillary Clinton still stands to become the sixth presidential candidate to win the majority of eligible voters but lose the White House.  At nearly 3 million votes, hers is by far the largest margin of any popular vote victory to frame an Electoral College defeat.

Despite his claims that three million Americans voted fraudulently, the Trump campaign brutally stonewalled Jill Stein’s attempts to get meaningful recounts in Michigan, Wisconsin and Pennsylvania.

Greg Palast has shown that this year hundreds of thousands of mostly black and Hispanic citizens were systematically stripped from the voter rolls. Numerous statisticians have also warned that vote counts could have been flipped in many states by “black box” electronic machines.

Until we have a transparent system based on universal automatic voter registration, hand counted paper ballots, mandatory audited recounts, and more, we have nothing resembling a democracy.

What we DO have in 2016 is this:  Donald Trump lost the popular vote by nearly three million votes but is apparently leading in the Electoral College with official victories in five states (Wisconsin, Michigan, Pennsylvania, North Carolina and Florida) where he lost in the exit polls.  Those vote counts were not contested by Hillary Clinton, and green recount attempts in Wisconsin, Michigan and Pennsylvania were stymied.

Those wanting someone other than Donald Trump to become president must now persuade some 37 electors from states officially won by Trump to not vote for him.  They must either switch those votes to Hillary Clinton or produce at least one electoral vote for a third candidate who would then be selected in the House of Representatives by a majority of the state delegations.

Such a “December Surprise” has never happened in US history.  It would appear to be a Constitutional possibility.  But the only certainty at this point seems to be that the clock is ticking.

Harvey Wasserman‘s latest book, America at the Brink of Rebirth: The Organic Spiral of US History, will be published in 2016.  His Solartopia Green Power & Wellness Show is at www.progressiveradionetwork.com, and he edits www.nukefree.org.
activism, Domestic Issues, Elections, trump
0 Events loaded