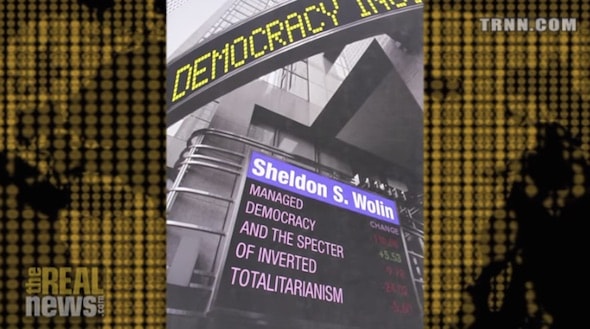 No revolt can succeed without professional revolutionists. These revolutionists live outside the formal structures of society. They are financially insecure—Vladimir Lenin spent considerable time in exile appealing for money from disenchanted aristocrats he would later dispossess. They dedicate their lives to fomenting radical change. They do not invest energy in appealing to power to reform. They are prepared to break the law. They, more than others, recognize the fragility of the structures of authority. They are embraced by a vision that makes compromise impossible. Revolution is their full-time occupation. And no revolution is possible without them.

There are environmental, economic and political grass-roots movements, largely unseen by the wider society, that have severed themselves from the formal structures of power. They have formed collectives and nascent organizations dedicated to overthrowing the corporate state. They eschew the rigid hierarchical structures of past revolutionary movements—although this may change—for more amorphous collectives. Plato referred to professional revolutionists as his philosophers. John Calvin called them his saints. Machiavelli called them his Republican Conspirators. Lenin labeled them his Vanguard. All revolutionary upheavals are built by these entities. [See a list of some of these groups, with links to their websites, at the end of this article.]

The revolutionists call on us to ignore the political charades and spectacles orchestrated by our oligarchic masters around electoral politics. They tell us to dismiss the liberals who look to a political system that is dead. They expose the press as an echo chamber for the elites.

The revolutionist is a curious hybrid of the practical and the impractical. He or she is aware of facing nearly impossible odds. The revolutionist has at once a lucid understanding of power, along with the vagaries of human nature, and a commitment to overthrowing power.

Revolutions can be crushed by force—history has amply demonstrated that—or hijacked by movements or individuals, such as Lenin, Trotsky and later Stalin, that betray the populace. Through the careful manipulation of counterrevolutionary forces, faux revolutions can demand not reform but the restoration of retrograde power elites. The Central Intelligence Agency mastered this technique in Iran when it organized street demonstrations and protests in 1953 to successfully overthrow Prime Minister Mohammad Mosaddegh and his Cabinet and again in 1973 when it ousted Chile’s President Salvador Allende. We see the same tactic at work today in Venezuela.

Movements within the revolutionary body compete for power, fight over arcane bits of doctrine, dispute tactics, form counterproductive schisms, misread power, overreach and collapse or fall victim to the insidious black propaganda that despotic authority excels in producing. They are infiltrated, monitored and harassed, and their leaders—and all uprisings, even supposedly leaderless ones, have leaders—are targeted for surveillance, arrest or even death. But, in times of decay such as the one we live in now, these movements express a fundamental truth about societies in downfall. This is their real power. They offer new possibilities to those who are being abused by failed systems of governance. And their ideals live beyond the confines of any particular revolt or uprising. Once this truth is unleashed, once the ideas that sustain a bankrupt system are exposed as a fraud, these movements are very hard to silence.

There is nothing rational about rebellion. To rebel against insurmountable odds is an act of faith. And without this faith the rebel is doomed. This faith is intrinsic to the rebel the way caution and prudence are intrinsic to those who seek to fit into existing power structures. The rebel, possessed by inner demons and angels, is driven by visions familiar to religious mystics. And it is the rebel alone who can save us from corporate tyranny. I do not know if these rebels will succeed. But I do know that a world without them is hopeless.

In the last section of my recent eight-part interview on the website The Real News with professor Sheldon Wolin, the author of “Politics and Vision” and “Democracy Incorporated,” I asked him whether it was time to begin to consider revolution.

“I think it is, but I think the proper emphasis should be on discussing it carefully … I mean by ‘carefully’ not timidly, but carefully in the sense that we would really have to be breaking new ground,” he said. “And I think it’s because of the nature of the forces we’ve been talking about that constitute a challenge, I think, the like of which hasn’t happened before, and that we’ve got to be very sure, because of the interlocked character of modern society, that we don’t act prematurely and don’t do more damage than [is] really justifiable.”

Wolin said that because the systems of indoctrination and propaganda within the corporate state are so sophisticated and pervasive, much of our initial revolutionary activity must be focused on political education.

“[The] really difficult challenge is to accompany the attempt to gain power with an equally strong emphasis on public education that makes it, so to speak, a potentially responsible repository of that power,” he said.

The effort to provide political education to the “lower echelons of power and get them to think differently about their role” is “a very touchy subject, because it leaves you open to accusations of promoting disloyalty among the police or among the army or what have you,” Wolin said. “And in a sense that’s true. But I think that nonetheless, without trying to, so to speak, baldly subvert the role of those powers in society, it is possible to reach them and to create a climate where they themselves have to come to grips with it. And I think that’s a task that’s arduous. It’s difficult. It’s even a little dangerous in our present age.”

“Given the way that ordinary people become exhausted by the simple task of living, working and trying to sustain families and neighborhoods in a way that just takes all of their energy,” he went on, “I do think it calls for some kind of group, or class, you could even call them, who would undertake the kind of continuous political work of educating, criticizing, trying to bring pressure to bear, and working towards a revamping of political institutions. I don’t mean to imply that there should be a disconnect between that group and ordinary people. I do think it requires that you recognize that such a group is necessary, in that the second task is to make sure that there are open lines of communication, of contact, of meetings between leaders and the people, such that there’s never a sense of estrangement or alienation, such that leading groups feel they’re free to pursue the good as they see it and for the good of the masses who do not.”

Wolin said that “there are openings in our system of governance and of public discourse” to “get dissident voices out into the public realm.” He said that the level of repression by the corporate state was not severe enough to justify violence.

“I think that we’re obligated to play by those rules, because they do allow us to disseminate the kind of message we want to disseminate, and that the need to sort of circumvent them or in some sense subvert them, it seems to me, is self-defeating,” he said.

“[T]here are enlightened publics in this country, but there’s no concerted general movement which can profess to represent a large body of opinion that’s opposed to these kind of developments,” he said.

The task of the revolutionist is to create organizations whereby “ordinary people and their power can be brought to bear in ways that will deter and dissuade those who are in a position to influence these decisions, because time, as we all know, is running out,” he said. “If we continue along the same course, I’m afraid the result is not simply going to be environmental disaster; it’s also going to, I think, feed … an outcry for really forceful government, and not in a necessarily democratic way.”

“I think that for [Max] Weber, the truly important civic virtues were just exactly the ones that would assert themselves at a time when basic institutional values were at stake and human values were at stake, and that you don’t win, or you win rarely, and if you win, it’s often for a very short time, and that that’s why politics is a vocation for Weber,” he said. “It’s not an occasional undertaking that we assume every two years or every four years when there’s an election. It’s a constant occupation and preoccupation. And the problem, as Weber saw it, was to understand it not as a partisan kind of education in the politicians or political party sense, but as in the broad understanding of what political life should be and what is required to make it sustainable. He’s calling for a certain kind of understanding that’s very different from what we think about when we associate political understanding with how do you vote or what party do you support or what cause do you support. Weber’s asking us to step back and say what kind of political order and the values associated with it that it promotes are we willing to really give a lot for, including sacrifice. And I think that it’s that distinction between the temporary and the transient and what’s truly of more enduring significance that sets Weber off against the group he hated, the relativists.”

———
Here are a few of the revolutionist groups working in the United States, along with links to their websites.

Fight for the Future, https://www.fightforthefuture.org/