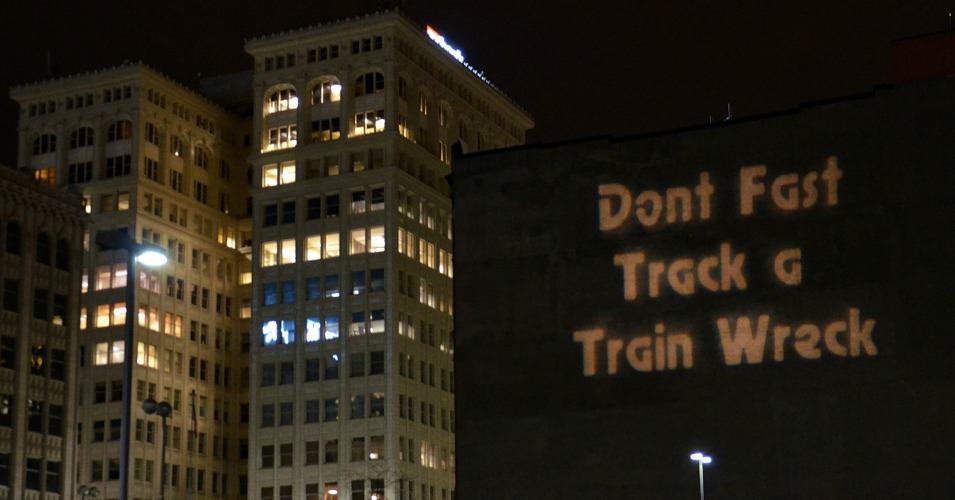 Projected on the side of a building in Spokane, Washington in 2013, the message against ‘fast track’ authority, which would restrict lawmakers ability to weigh in or make changes to the deal, has been key in the fight against the Trans-Pacific Trade Partnership agreement. The reason: If the American people knew what was in this deal they would never allow their members of Congress to vote in favor of it. (Photo: Michael Beasley of Spokane Coalition Builders/flickr/cc)

Republicans who now run Congress say they want to cooperate with President Obama, and point to the administration’s Trans-Pacific Partnership, or TPP, as themodel. The only problem is the TPP would be a disaster.

If you haven’t heard much about the TPP, that’s part of the problem right there. It would be the largest trade deal in history — involving countries stretching from Chile to Japan, representing 792 million people and accounting for 40 percent of the world economy – yet it’s been devised in secret.

Lobbyists from America’s biggest corporations and Wall Street’s biggest banks have been involved but not the American public. That’s a recipe for fatter profits and bigger paychecks at the top, but not a good deal for most of us, or even for most of the rest of the world.

First some background. We used to think about trade policy as a choice between “free trade” and “protectionism.” Free trade meant opening our borders to products made elsewhere. Protectionism meant putting up tariffs and quotas to keep them out.

In the decades after World War II, America chose free trade. The idea was that each country would specialize in goods it produced best and at least cost. That way, living standards would rise here and abroad. New jobs would be created to take the place of jobs that were lost. And communism would be contained.

For three decades, free trade worked. It was a win-win-win.

But in more recent decades the choice has become far more complicated and the payoff from trade agreements more skewed to those at the top.

It’s no longer free trade versus protectionism. Big corporations and Wall Street want some of both.

They want more international protection when it comes to their intellectual property and other assets. So they’ve been seeking trade rules that secure and extend their patents, trademarks, and copyrights abroad, and protect their global franchise agreements, securities, and loans.

But they want less protection of consumers, workers, small investors, and the environment, because these interfere with their profits. So they’ve been seeking trade rules that allow them to override these protections.

Not surprisingly for a deal that’s been drafted mostly by corporate and Wall Street lobbyists, the TPP provides exactly this mix.

What’s been leaked about it so far reveals, for example, that the pharmaceutical industry gets stronger patent protections, delaying cheaper generic versions of drugs. That will be a good deal for Big Pharma but not necessarily for the inhabitants of developing nations who won’t get certain life-saving drugs at a cost they can afford.

The TPP also gives global corporations an international tribunal of private attorneys, outside any nation’s legal system, who can order compensation for any “unjust expropriation” of foreign assets.

Even better for global companies, the tribunal can order compensation for any lost profits found to result from a nation’s regulations. Philip Morris is using a similarprovision against Uruguay (the provision appears in a bilateral trade treaty between Uruguay and Switzerland), claiming that Uruguay’s strong anti-smoking regulations unfairly diminish the company’s profits.

Anyone believing the TPP is good for Americans take note: The foreign subsidiaries of U.S.-based corporations could just as easily challenge any U.S. government regulation they claim unfairly diminishes their profits – say, a regulation protecting American consumers from unsafe products or unhealthy foods, investors from fraudulent securities or predatory lending, workers from unsafe working conditions, taxpayers from another bailout of Wall Street, or the environment from toxic emissions.

The administration says the trade deal will boost U.S. exports in the fast-growing Pacific basin where the United States faces growing economic competition from China. The TPP is part of Obama’s strategy to contain China’s economic and strategic prowess.

Fine. But the deal will also allow American corporations to outsource even more jobs abroad.

In other words, the TPP is a Trojan horse in a global race to the bottom, giving big corporations and Wall Street banks a way to eliminate any and all laws and regulations that get in the way of their profits.

At a time when corporate profits are at record highs and the real median wage is lower than it’s been in four decades, most Americans need protection – not from international trade but from the political power of large corporations and Wall Street.

The Trans Pacific Partnership is the wrong remedy to the wrong problem. Any way you look at it, it’s just plain wrong.