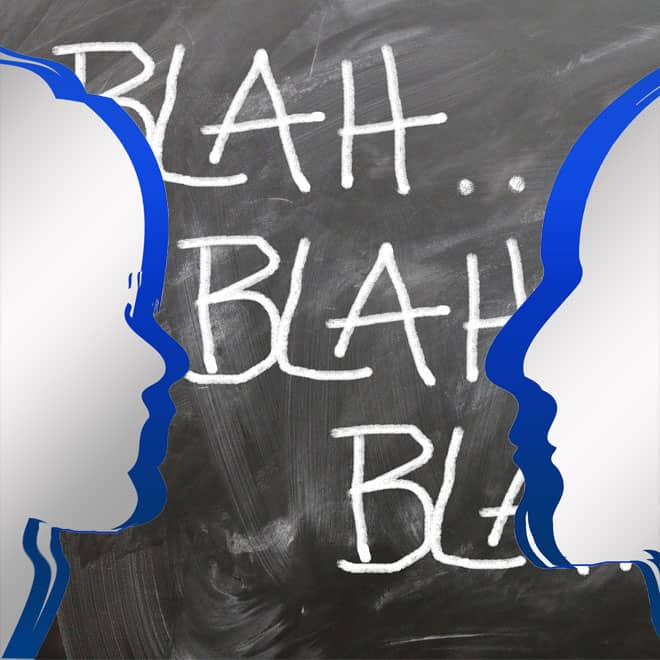 Let’s call the whole thing off.

Not the election, although if we only had a magic reset button we could pretend this sorry spectacle never happened and start all over.

No, we mean the presidential debates — which, if the present format and moderators remain as they are, threaten an effect on democracy more like Leopold and Loeb than Lincoln and Douglas.

We had a humiliating sneak preview Sept. 7, when NBC’s celebrity interviewer Matt Lauer hosted a one-hour “Commander-in-Chief Forum” in which Hillary Clinton and Donald Trump spoke with Lauer from the same stage but in separate interviews. The event was supposed to be about defense and veterans issues, yet to everyone’s bewilderment (except the Trump camp, which must have been cheering out of camera range that Lauer was playing their song), Lauer seemed to think Clinton’s emails were worthy of more questions than, say, nuclear war, global warming or the fate of Syrian refugees.

Of course, that wasn’t a debate per se but neither are the sideshows that we call the official debates, even though the rules put in place by the nonprofit Commission on Presidential Debates are meant to insure a certain amount of fairness and decorum — unlike the trainwreck of “debates” during the primary season, which were run solely by the parties and media sponsors with no adult supervision.

But despite the efforts of the commission, the official presidential debates coming up also are dominated by the candidates and the media, and therein lurk both the problems and the reasons to scrap this fraudulent nonsense for something sane and serious.

A little history: From 1976, when President Gerald Ford faced off against Georgia Gov. Jimmy Carter, the three presidential debates and one vice presidential debate were administered by the League of Women Voters, which did an admirable job under trying circumstances. But then, as historian Jill Lepore writes in an excellent New Yorker article on the history of presidential debates, the Reagan White House wanted to wrest control from the League and give it to the networks. According to Lepore:

“During Senate hearings, Dorothy Ridings, the president of the League of Women Voters, warned against that move: ‘Broadcasters are profit-making corporations operating in an extremely competitive setting, in which ratings assume utmost importance.’ They would make a travesty of the debates, she predicted, not least because they’d agree to whatever terms the campaigns demanded. Also: ‘We firmly believe that those who report the news should not make the news.’”

Ridings’ prescience proved correct and then some. In 1988, the League pulled out of the Bush-Dukakis debates, declaring in a press release, “It has become clear to us that the candidates’ organizations aim to add debates to their list of campaign-trail charades devoid of substance, spontaneity and answers to tough questions. The League has no intention of becoming an accessory to the hoodwinking of the American public.”

Walter Cronkite agreed. That same year, he wrote, “The debates are part of the unconscionable fraud that our political campaigns have become. Here is a means to present to the American people a rational exposition of the major issues that face the nation, and the alternate approaches to their solution. Yet the candidates participate only with the guarantee of a format that defies meaningful discourse. They should be charged with sabotaging the electoral process.”

But as Ridings said, it’s not just the candidates involved in this criminal hijacking of discourse. The giant media conglomerates — NBCUniversal (Comcast), Disney, CBS Corp., 21st Century Fox, Time Warner — have turned the campaign and the upcoming debates into profit centers that reap a huge return from political trivia and titillation. A game show, if you will — a farcical theater of make-believe rigged by the two parties and the networks to maintain their cartel of money and power.

“Debating,” Jill Lepore writes, “like voting, is a way for people to disagree without hitting one another or going to war: it’s the key to every institution that makes civic life possible, from courts to legislatures. Without debate, there can be no self-government.” But the media monoliths have taken the democratic purpose of a televised debate — to inform the public on the issues and the candidates’ positions on them — and reduced it to a mock duel between the journalists who serve as moderators — too often surrendering their allegedly inquiring minds — and candidates who know they can simply blow past the questions with lies that go unchallenged, evasions that fear no rebuke and demagoguery that fears no rebuttal.

Remember that it was CBS CEO Leslie Moonves who whooped about the cash to be made from the campaign, telling an investors conference in February, “The money’s rolling in and this is fun. I’ve never seen anything like this, and this going to be a very good year for us… Bring it on, Donald. Keep going. Donald’s place in this election is a good thing.” Oh, yes, good for Moonves’ annual bonus, but good for democracy? Don’t make us laugh. Elaine Quijano of CBS News will be moderating the vice presidential candidates’ debate on Oct. 4, with Moonves looking over her shoulder.

Remember, too, that both Lauer and Trump are NBCUniversal celebrities who have earned millions from and for the networks. (Vanity Fair magazine even reported that NBCUniversal boss Steve Burke had spoken hypothetically with Trump about continuingThe Apprentice from the White House.) Moderating the first presidential debate on Sept. 26 is NBC anchorman Lester Holt, a nice and competent fellow, but facing the same pressure as his fellow teammate Matt Lauer to not offend their once-and-possibly-future NBC star Donald Trump.

And remember that Anderson Cooper of Time-Warner’s CNN, the all-Trump-all-the-time network, and Martha Raddatz of Disney’s ABC News will anchor the second presidential debate (to her credit, Raddatz did a good job during the 2012 vice presidential debate) — and that the final, crucial close encounter between Trump and Clinton will be moderated by Chris Wallace of Fox, the very “news organization” that joined with Donald Trump to gleefully spread the Big Lie of Birtherism that served Trump so well with free publicity (and Fox so well with ratings) and that Trump now conveniently and hypocritically repents.

We wait breathlessly to see if during that debate Wallace inquires of Trump: “Did you really believe that lying about Barack Obama’s birth was good for the country?” And: “What is your source for saying Hillary Clinton started the rumor that Obama was not born in America?” And: “How do we know you won’t change your mind again and raise further doubts about whether the president is an American?” And — to pick up on a suggestion from The Washington Post’s David Fahrenthold, who has been reporting on Trump’s charitable giving — or lack thereof: “Mr. Trump, will you now follow through on your promise to donate $5 million to charity once you were given proof that President Obama was born in the United States? What charity do you have in mind? One of your own, perhaps?”

Wallace has already admitted he is in no position to hold Trump accountable for the lies he tells in the “debate” — that “it’s not my job” to fact check either Trump or Clinton during the course of their appearance with him. That should be pleasing to Roger Ailes, who was fired as head of the Fox News empire for scandalous sexist behavior but who is now giving Trump debate tips. Wallace is on record saying how much he admired and loved Ailes, to whom he owes his stardom at Fox — “The best boss I’ve had in almost a half a century in journalism,” Wallace said.

Such conflicts of interest at the core of the debates reminds us of what Woody Allen said back in one of his earlier, funnier films — that the whole thing is a travesty of a mockery of a sham of a mockery of a travesty of two mockeries of a sham. And why are we so complacent about the hijacking of our political process — that it has descended to this level where the two parties and the media giants pick as the only surrogates of the American people the minions of an oligarchic media riddled with cronyism and conflicts of interest?

So yes, scrap the debates as they are and rebuild. Even with a few days left until the first one there’s time to call everyone together, announce that our democracy deserves better and change the rules.

John Donvan of ABC News, moderator of public broadcasting’s excellent Intelligence Squared US debates, has been making the media rounds urging that the debate format be changed to Oxford rules — to formally argue resolutions like “Resolved: The United States Should Withdraw from NATO,” in which the candidates would make brief opening and closing statements and in the time remaining question one another about the issue at hand, under strict time guidelines At Change.org, 60,000 have signed a petition urging this be done. You have to wonder what would happen if those 60,000 and more turned up outside the first debate at Hofstra University on Sept. 26, exercising their constitutional right of assembly and demanding, not just urging, this better way.

Or why not put the League of Women Voters back in charge, with just the two candidates and a ruthless timekeeper on the stage insisting that they keep to stringent time limits and behave like human beings? If they don’t, on their heads be it. The timekeeper could even pull the plug early if things got out of hand.

Which brings us to the #1 Question: How can anyone keep Trump in bounds? He makes up the rules as he goes along. He is a pathological liar and overweening narcissist who, as Josh Marshall at Talking Points Memo reminds us in a chilling take on the man, has more than once hinted at the murder of Hillary Clinton. Says the astute Marshall:

“The salient fact about Trump isn’t his cruelty or penchant for aggression and violence. It’s his inability to control urges and drives most people gain control over very early in life. There are plenty of sadists and sociopaths in the world. They’re not remarkable. The scariest have a high degree of impulse control (iciness) which allows them to inflict pain on others when no one is looking or when they will pay no price for doing so. What is true with Trump is what every critic has been saying for a year: the most obvious and contrived provocation can goad this thin-skinned charlatan into a wild outburst. He’s a 70-year-old man with children and grandchildren and he has no self-control.”

Does anyone really believe a candidate so unstable can or will engage in serious debate? And if our first line of defense against his volcanic lies — journalists supposedly committed to truth — crumbles, how will we ever clean up the contamination?

Something’s got to give. We can’t go on like this. We can no longer leave the electoral process to the two parties or the media conglomerates with whom they’re in cahoots. The stakes are too high.

Bill Moyers is the managing editor of Moyers & Company and BillMoyers.com.

Michael Winship is the Emmy Award-winning senior writer of Moyers & Company and BillMoyers.com, and a former senior writing fellow at the policy and advocacy group Demos. Follow him on Twitter at@MichaelWinship.