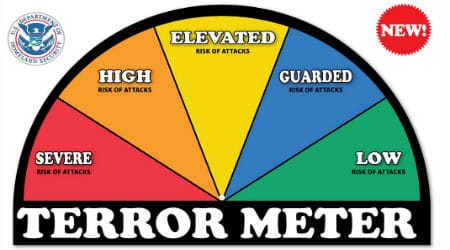 Republicans in Congress are now embroiled in a petty dispute with Democrats over funding for the Department of Homeland Security (DHS) because they don’t like President Obama’s new immigration policy. If Republicans don’t agree to pass a funding bill by the end of the week, the agency will have to partially shut down and thousands of employees will be furloughed.

While Republicans are again holding a federal agency hostage for a ridiculous reason, they’ve managed to stumble across a good idea in the process: Congress should not just threaten to pull DHS funding, they should abolish it entirely.

DHS is a behemoth and a bureaucratic nightmare that is projected to cost Americans $38.2bn this year. This conglomeration of over 20 government agencies, under one umbrella of dysfunction and secrecy, was mashed together by George W. Bush after 9/11 to form a largely incompetent and corrupt spy machine. Examples of its awfulness abound.

Consider the DHS’ so-called “fusion centers”, which are little more than spying hubs that vacuum up information from federal and local authorities and store it for indefinite amounts of time. A scathing Senate report on the centers, which have cost the DHS at least $1.4 billion dollars, concluded that they produce “predominantly useless information” – one employee was quoted as calling it “a bunch of crap” – and that they also “[run] afoul of departmental guidelines meant to guard against civil liberties” and are “possibly in violation of the Privacy Act”. While they’ve spied on many people who were engaged in purely First Amendment protected activities, they’re not known to have stopped a terrorist attack.

The DHS has also turned into a piggy bank for local police forces, handing out millions and millions of dollars in military gear to police that they can barely account for, along with high-tech spying equipment used for mass surveillance of innocent citizens. For example, they have a program to hand out funds for local police to buy surveillance drones and give grants to cops for controversialStingray surveillance devices, which are fake cell phone towers that allow the police to spy on entire neighborhoods at once.

They also have their own Predator drones program (without the missiles like in Pakistan and Yemen) that they fly along the US border as well. A government report released in Januaryderided DHS’s Predator drones as almost entirely ineffective and a giant waste of money. The report didn’t even cover the alarming privacy concerns of having sophisticated spying machines constantly flying over large parts of the country.

Some of the harshest criticism of the DHS has come from within the agency. TheOffice of Intelligence and Analysis has been mocked by it’s own current and former employees for churning out “intelligence spam” and producing “almost nothing you can’t find on Google.”

Secrecy is often the DHS’ response to inefficiency. The Office of Intelligence and Analysis keeps its budget classified, likely in an attempt to hide its uselessness. An inspector general report found that the TSA – a sub-agency of DHS that apparently has never caught a terrorist but routinely violates innocent people’s privacy – often arbitrarily holds back information that makes the agency look bad from the public.

The DHS is also supposed to protect us from cyber threats, yet they can’t even protect themselves from embarrassing hacks. [The Government Accountability Office wrote a report saying the DHS apparently doesn’t even know how to secure its buildings from being hacked, let alone the rest of the government.] Another Senate report released in January criticized DHS’s cyber capabilities on almost every level, calling DHS “lousy” and concluding that they do not have the ability to protect the government from attacks by nation-states.

There are so many incidents of gigantic amounts of waste at DHS that it is almost hard to keep track. Here’s one. And here’s yet another. And here’s one more.

In response to Republican threats, Democrats are in the midst of running a cringe-worthy “Don’t shut down our security” campaign. But why not recognize this as a blessing in disguise? Thanks to this contrived ultimatum, Congress can go a step further and do what should have been done a long time ago: dismantle this wasteful, invasive, secretive agency once and for all.