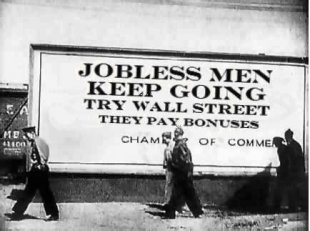 It’s often assumed that people are paid what they’re worth. According to this logic, minimum wage workers aren’t worth more than the $7.25 an hour they now receive. If they were worth more, they’d earn more. Any attempt to force employers to pay them more will only kill jobs.

According to this same logic, CEOs of big companies are worth their giant compensation packages, now averaging 300 times pay of the typical American worker. They must be worth it or they wouldn’t be paid this much. Any attempt to limit their pay is fruitless because their pay will only take some other form.

“Paid-what-you’re-worth” is a dangerous myth.

Does this mean the typical GM employee a half-century ago was worth four times what today’s typical Walmart employee is worth? Not at all. Yes, that GM worker helped produce cars rather than retail sales. But he wasn’t much better educated or even that much more productive. He often hadn’t graduated from high school. And he worked on a slow-moving assembly line. Today’s Walmart worker is surrounded by digital gadgets — mobile inventory controls, instant checkout devices, retail search engines — making him or her quite productive.

The real difference is the GM worker a half-century ago had a strong union behind him that summoned the collective bargaining power of all autoworkers to get a substantial share of company revenues for its members. And because more than a third of workers across America belonged to a labor union, the bargains those unions struck with employers raised the wages and benefits of non-unionized workers as well. Non-union firms knew they’d be unionized if they didn’t come close to matching the union contracts.

Today’s Walmart workers don’t have a union to negotiate a better deal. They’re on their own. And because fewer than 7 percent of today’s private-sector workers are unionized, non-union employers across America don’t have to match union contracts. This puts unionized firms at a competitive disadvantage. The result has been a race to the bottom.

By the same token, today’s CEOs don’t rake in 300 times the pay of average workers because they’re “worth” it. They get these humongous pay packages because they appoint the compensation committees on their boards that decide executive pay. Or their boards don’t want to be seen by investors as having hired a “second-string” CEO who’s paid less than the CEOs of their major competitors. Either way, the result has been a race to the top.

If you still believe people are paid what they’re worth, take a look at Wall Street bonuses. Last year’s average bonus was up 15 percent over the year before, to more than $164,000. It was the largest average Wall Street bonus since the 2008 financial crisis and the third highest on record, according toNew York’s state comptroller. Remember, we’re talking bonuses, above and beyond salaries.

All told, the Street paid out a whopping $26.7 billion in bonuses last year.

Are Wall Street bankers really worth it? Not if you figure in the hidden subsidy flowing to the big Wall Street banks that ever since the bailout of 2008 have been considered too big to fail.

People who park their savings in these banks accept a lower interest rate on deposits or loans than they require from America’s smaller banks. That’s because smaller banks are riskier places to park money. Unlike the big banks, the smaller ones won’t be bailed out if they get into trouble.

This hidden subsidy gives Wall Street banks a competitive advantage over the smaller banks, which means Wall Street makes more money. And as their profits grow, the big banks keep getting bigger.

How large is this hidden subsidy? Two researchers, Kenichi Ueda of the International Monetary Fund and Beatrice Weder di Mauro of the University of Mainz, have calculated it’s about eight tenths of a percentage point.

This may not sound like much but multiply it by the total amount of money parked in the ten biggest Wall Street banks and you get a huge amount — roughly $83 billion a year.

Without the subsidy, no bonus pool.

By the way, the lion’s share of that subsidy ($64 billion a year) goes to the top five banks — JPMorgan, Bank of America, Citigroup, Wells Fargo. and Goldman Sachs. This amount just about equals these banks’ typical annual profits. In other words, take away the subsidy and not only does the bonus pool disappear, but so do all the profits.

The reason Wall Street bankers got fat paychecks plus a total of $26.7 billion in bonuses last year wasn’t because they worked so much harder or were so much more clever or insightful than most other Americans. They cleaned up because they happen to work in institutions — big Wall Street banks — that hold a privileged place in the American political economy.

And why, exactly, do these institutions continue to have such privileges? Why hasn’t Congress used the antitrust laws to cut them down to size so they’re not too big to fail, or at least taxed away their hidden subsidy (which, after all, results from their taxpayer-financed bailout)?

Perhaps it’s because Wall Street also accounts for a large proportion of campaign donations to major candidates for Congress and the presidency of both parties.

America’s low-wage workers don’t have privileged positions. They work very hard — many holding down two or more jobs. But they can’t afford to make major campaign contributions and they have no political clout.

According to the Institute for Policy Studies, the $26.7 billion of bonuses Wall Street banks paid out last year would be enough to more than double the pay of every one of America’s 1,085,000 full-time minimum wage workers.

The remainder of the $83 billion of hidden subsidy going to those same banks would almost be enough to double what the government now provides low-wage workers in the form of wage subsidies under the Earned Income Tax Credit.

But I don’t expect Congress to make these sorts of adjustments any time soon.

The “paid-what-your-worth” argument is fundamentally misleading because it ignores power, overlooks institutions, and disregards politics. As such, it lures the unsuspecting into thinking nothing whatever should be done to change what people are paid, because nothing can be done.

Robert B. Reich has served in three national administrations, most recently as secretary of labor under President Bill Clinton. He also served on President Obama’s transition advisory board. His latest book is “Aftershock: The Next Economy and America’s Future.” His homepage is www.robertreich.org.