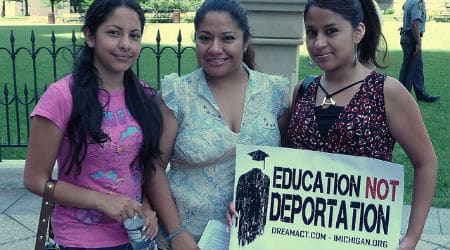 When the Supreme Court announced it would review a lower-court decision blocking President Barack Obama’s executive action on immigration, supporters of the executive action celebrated the news. But they shouldn’t have been the only ones celebrating: so should anyone who cares about the rule of law. The decision of the court below is at odds with our nation’s immigration laws, which confer substantial discretion on the executive branch to determine how best to implement those laws. And, if allowed to stand, it would undermine the president’s ability to carry out his constitutional responsibility to “take Care that the Laws be faithfully executed.” It is time for the Supreme Court to reverse this erroneous lower-court decision and unfreeze the president’s program, which should have gone into effect nearly a year ago.

By way of background, on November 20, 2014, the secretary of the Department of Homeland Security issued a series of directives to establish priorities for DHS officials’ exercise of their discretion when enforcing federal immigration law. Consistent with statutory guidance provided by Congress, these directives clarified that the government’s enforcement priorities “have been, and will continue to be national security, border security, and public safety.” They further directed that in light of those priorities, and given limited enforcement resources, federal officials should exercise their discretion, on a case-by-case basis, to defer removal of certain parents of U.S. citizens or lawful permanent residents.

By setting these priorities and providing guidance regarding how those priorities should be implemented, the Obama administration was simply doing what presidents of both parties have done for decades – exercising the substantial discretion Congress has conferred on the executive branch to make determinations about how best to enforce the nation’s immigration laws. Moreover, the tool the administration was using to implement those priorities – deferred action on removal – is one that has been consistently employed by administrations of both parties and repeatedly endorsed by Congress on a bipartisan basis.

It’s not at all surprising that Congress would confer on the executive this discretion to set “national immigration enforcement policies and priorities” and to “establish such regulations; . . . issue such instructions; and perform such other acts as he deems necessary for carrying out his authority.” As a bipartisan group of former members of Congress explained in an amicus brief filed when the Court was deciding whether to hear the case, it is impossible for Congress to anticipate in advance every situation to which legislation must apply. That is particularly true in a context like immigration, which touches on the nation’s foreign affairs and must adapt to frequently changing conditions on the ground. As the Supreme Court has previously noted, immigration law is a field in which “flexibility and the adaptation of the congressional policy to infinitely variable conditions constitute the essence of the program.”

Indeed, the Court has repeatedly recognized the broad discretion that Congress has conferred on the executive branch in the immigration context. As recently as 2012, the Court (in a majority opinion written by Justice Anthony Kennedy and, notably, joined by Chief Justice John Roberts) noted that “[a] principal feature of the removal system is the broad discretion exercised by immigration officials,” and that “[f]ederal officials, as an initial matter, must decide whether it makes sense to pursue removal at all.” As the Court explained, the discretion enjoyed by the executive branch allows its officers to consider many factors in deciding whether removal is appropriate, including both “immediate human concerns” and “foreign policy.”

Further, this delegation of discretion is essential in the immigration context because Congress has made a substantial number of noncitizens deportable, but has nowhere mandated that every single undocumented immigrant be removed. Further, and perhaps more important, Congress hasn’t appropriated the funds that would be necessary to effectuate such a mass removal. Currently, there are roughly eleven million undocumented immigrants, but Congress has appropriated funds sufficient to deport only 400,000 per year. The executive branch thus has no choice but to exercise the discretion Congress has conferred on it in determining how best to allocate those limited funds.

Significantly, the idea that Congress might leave it to the executive branch to set enforcement priorities or to determine how best to implement legislation is not unique to the immigration context. Indeed, it has roots in the text and history of our Constitution, which “vest[s] in a President of the United States of America” the “executive Power.”

The framers’ decision to “vest[]” the “executive Power” in a single, independent president was a considered one, borne of their experiences under the Articles of Confederation government that immediately followed British rule. The Articles had vested executive authority in the Continental Congress – not in an independent executive – and the consequences were disastrous. The nation’s laws were not effectively enforced, and the government could not operate effectively. Having learned from that experience, Alexander Hamilton wrote that “all men of sense will agree in the necessity of an energetic Executive.”

The framers’ response was simple: to provide for that “energetic Executive,” they ensured that the new, independent president would be able to effectively enforce the nation’s laws. This new president was given the responsibility to “take Care that the Laws be faithfully executed,” a responsibility that the Supreme Court has long recognized is “essentially a grant of the power to execute the laws.”

One longstanding manifestation of the “power to execute the laws” is the power to determine how best those laws should be enforced within the statutory limits set by Congress. As then-Justice William Rehnquist wrote for the Court in the seminal case Heckler v. Chaney, agency decisions about how best to enforce the law “share[] to some extent the characteristics of the decision of a prosecutor in the Executive Branch not to indict,” a decision that “has long been regarded as the special province of the Executive Branch, inasmuch as it is the Executive who is charged by the Constitution to ‘take Care that the Laws be faithfully executed.’” Moreover, as the Court further explained in Chaney, the executive branch is particularly well positioned to make such decisions because it “is far better equipped than the courts to deal with the many variables involved in the proper ordering of its priorities.”

Indeed, that is exactly what Congress decided in the immigration context – that the executive branch would be best able to take into account the various factors relevant to immigration enforcement and to decide what the priorities should be and how they can best be implemented. And that is exactly what the Obama administration did when it issued its directives in November 2014.

The president’s executive action is thus not at odds with his responsibility to “take Care that the Laws be faithfully executed,” as its challengers would have it. Instead, it is a manifestation of that responsibility; by making enforcement decisions and providing guidance about how those decisions can best be implemented in a manner consistent with the immigration laws passed by Congress, the president is ensuring that those laws are faithfully executed.

To be sure, the executive branch cannot, as the Supreme Court also recognized in Heckler, “‘consciously and expressly adopt[] a general policy’ that is so extreme as to amount to an abdication of its statutory responsibilities.” But the president’s executive action does not come anywhere even close to that line, given that it is plainly an effort to determine how best to effectuate the administration’s statutory responsibilities, consistent with the limited enforcement resources that Congress has made available.

By freezing the implementation of the president’s executive action, the courts below hindered the president’s ability to effectively enforce the nation’s immigration laws, and that is why members of Congress, current and former, Republican and Democratic, weighed in and urged the Court to hear the case. Indeed, as a bipartisan group of former members of Congress observed, the decision of the court below “dramatically undermine[s] the executive branch’s ability to effectively enforce the nation’s immigration laws in the manner that multiple congresses and Administrations, representing both political parties, have established.”

Now that the Supreme Court has decided to hear the case, it should reaffirm its recognition of the broad discretion enjoyed by the executive branch when it comes to enforcing the nation’s immigration laws and permit the executive branch to exercise that discretion here. If it does, many people will have cause to celebrate when the Court announces its ruling – proponents of the rule of law and a well-functioning government, supporters of the president’s executive action, and, most important, the millions of children and their parents who may benefit from the president’s action.

Brianne Gorod is Chief Counsel at the Constitutional Accountability Center. She co-authored a cert.–stage amicus brief on behalf of a bipartisan group of former members of Congress in support of the Obama administration in United States v. Texas.