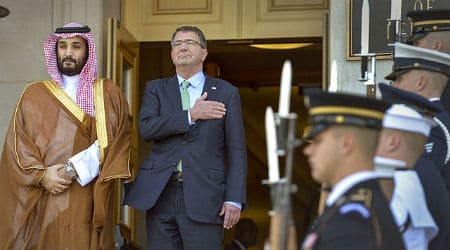 The United States is currently waging war in six Middle East countries — Iraq, Afghanistan, Syria, Somalia, Libya, and Yemen. America’s participation in these wars may include training the local army, using drones to attack suspected terrorists, providing weapons and logistical support to one side side or the other, or sending in American combat troops — sometimes all of the above. None of the countries in which the U.S.military is involved poses a threat to our national security, least of all Yemen.

Yemen is one of the poorest countries in the world. It has to import most of its food and other essentials, and only about half the population is literate. Yemen’s chief asset is the city of Aden, which lies on the Gulf of Aden south of Saudi Arabia and across from Somalia. It is, or was was until recently, a strategic port, one of the  best in the world. Aden was for many years under the control of British Petroleum, Inc., which turned it over to the Yemeni government in 1977.

Today Yemen is a battleground, the site of what aid organizations say is a human catastrophe. Food, water, medicine, and fuel are  scarce, and there’s virtually no electricity. According to the World Health Organization, roughly a third of the population is in urgent need of medical care, but most of the hospitals have been forced to close.

The continuing carnage is the result of a relentless bombing campaign by Saudi Arabia and the Gulf emirates who since last March have been carrying out bombing attacks on Yemen, making no distinction between civilian and military targets. Bombs are hitting homes, schools, factories, power stations, and even hospitals. A Saudi airstrike in mid-June destroyed a UNESCO World Heritage site in Sanaa that had survived for 2,500 years. To date more than 3,000 Yemenis have been killed and at least 11,000 wounded, most of them civilians.

Meanwhile the Saudis have  imposed a tight blockade on Yemen that prevents it from importing food, medicine, and other necessities, especially humanitarian aid. Last April Iran’s president Hassan Rouhani called for an immediate ceasefire and for dialogue between the two warring sides. But instead of supporting that call the Obama administration  announced it was speeding up weapons shipments to the Saudis and increasing its intelligence and logistics support.

Two weeks later a U.S. aircraft carrier and a guided missile carrier arrived to join ten other American warships off Yemen’s coast. An international outcry against the indiscriminate killing of civilians finally prompted Obama to urge an end to the bombing. But the new Saudi ruler, King Salman,  ignored the request, and the bombing has continued, along with the crippling embargo.

Two questions come to mind: Why are the Saudis doing this? And why is the U.S. providing them with military support?

Four years ago, during the demonstrations that marked Arab Spring, Yemen’s president, Ali Abdullah Saleh, was overthrown in a coup, and Abed Mansour Hadi took his place. Since then a tribal war has been going on between Hadi’s supporters and a northern tribe known as the Houthi who hope to restore Saleh to the presidency. Hadi’s allies are predominantly Sunni Muslims, and most of the Houthis are Shiites, but analysts say sectarian differences are not what is driving the bombing campaign. It is the Arab states’ fear of Iran.

The Saudis claim the Iranians seek to dominate the region, and that the Houthis are their surrogates. The Saudis see this as a proxy war between Iran and the Gulf states, but the former American ambassador to Yemen, Stephen Seche, denies this. Seche says the Houthis get financial aid from the Iranians but  are by no means their surrogates–they have their own strictly domestic agenda. Until the Saudis intervened, this was basically a tribal war. Al Qaeda, which is Sunni, and the Houthis are deadly enemies, which may explain why Al Qaeda is so far the main beneficiary of the Saudis’ involvement in Yemen. This may not be accidental. The Saudi delegation at the failed ceasefire talks between the Houthis and the ousted Hadi government in mid-June included Abdulwahab Al-Humiqani, whom the United States accuses of recruiting fighters and raising money for Al Qaeda in Yemen.

The talks were suspended when the Houthis rejected a Hadi government demand that they withdraw from territory they had captured before a ceasefire went into effect. So a situation continues in which the U.S. fires drone missiles at Al Qaeda members in Yemen, while at the same time the Saudis refrain from bombing the areas Al Qaeda controls. As a result, Al Qaeda today controls more territory in Yemen than at any time since 2012.

Further complicating the situation has been the entrance on the scene of the Islamic State, or ISIS. ISIS has set off several car bombs in the city of Sanaa that an ISIS spokesman said were intended as “revenge against the Houthi apostates.” As a result, the U.S. now finds itself attacking Al Qaeda and ISIS while fighting on their side against the Houthis. As former  ambassador Seche commented, “If you’re looking for logic here, you’re not going to find much.”

As to why the United States helping the Saudis wage a destructive war in a country that in no way threatens it, an American official gave the answer last April. Our aid, he said, “is a message to our partners that we are … willing to give them support. It is a message to the Iranians that we’re watching.” The Obama administration, in other words, wants to reassure the Saudis and other Gulf monarchs that if the United states signs a nuclear agreement with Iran, they needn’t worry. The White House will continue to support them and to treat Iran as an adversary.

An even more urgent reason for supporting a war by some of the world’s most oppressive regimes is that Saudi Arabia and the Gulf emirates keep our weapons factories operating full time. The Arab states recently agreed to buy nearly a hundred billion dollars worth of American-made war planes, tanks, guns and bombs. And everything the Arabs buy, Israel gets free, since the United States has made a firm pledge to maintain Israel’s “military edge” over its neighbors. This keeps the profits flowing to the arms industry, keeps employment high in several crucial states, and pleases members of Congress who collect large campaign contributions from the arms makers and the Israel lobby.

The only losers are the Yemenis whose bones are being shattered, and whose flesh is being burned to ashes by American-made  missiles. Sooner or later there will be an end to the fighting, and a minor war will pass into history. But the plight of its victims should haunt Americans for a long time to come.

Rachelle Marshall is a retired editor and writer and a member of Mill Valley Seniors for Peace, Jewish Voice for Peace, and Women’s International League for Peace and Freedom.