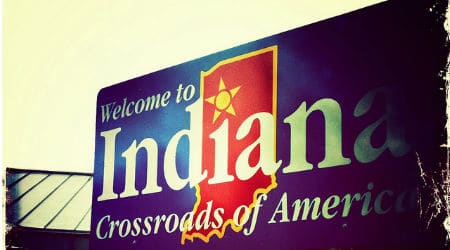 On Monday, Tim Cook, of Apple, and Marco Rubio, of the Senate, agreed on the answer to a question that Governor Mike Pence, of Indiana, has gone to absurd lengths to dodge. Both said that the idea of Indiana’s Religious Freedom Restoration Act was to let certain businesses turn away gay and lesbian customers. The difference is that only one of them—the one with some Apple Watches to sell—thought that the act was a bad idea; the other one, who was speaking on Fox News, didn’t. Rubio also said that he’d make a “big announcement” next month, probably having to do with running for President. His view was seconded by another Presidential candidate, Jeb Bush, who, after talking about how the spread of same-sex marriage had caused florists to face crises of conscience, said of the RFRA, “We’re going to need this.” Need it for what?

“FIX THIS NOW” was the headline on the front page of the Indianapolis Starthe next morning. The editorial inside said that the law, “whatever its original intent,” had created a “deep mess,” one that endangered the state’s reputation and its economy. The newspaper argued that nothing short of a comprehensive state anti-discrimination law that would protect the rights of gays and lesbians would fix it. Governor Pence has said that he has no interest in such a law, although this morning he conceded that he would support an adjustment to the act—“a clarification, but it’s also a fix.” He wasn’t specific about the change, and it’s hard to know if it will be enough, particularly since Pence went on to say that the RFRA had been “smeared”—that it had never been discriminatory, and the problem was one of “perception.”

The Indiana law is the product of a G.O.P. search for a respectable way to oppose same-sex marriage and to rally the base around it. There are two problems with this plan, however. First, not everyone in the party, even in its most conservative precincts, wants to make gay marriage an issue, even a stealth one—or opposes gay marriage to begin with. As the unhappy reaction in Indiana shows, plenty of Republicans find the anti-marriage position embarrassing, as do some business interests that are normally aligned with the party. Second, the law is not an empty rhetorical device but one that has been made strangely powerful, in ways that haven’t yet been fully tested, by the Supreme Court decision last year in Burwell v. Hobby Lobby. That ruling allowed the Christian owners of a chain of craft stores to use the federal version of the RFRA to ignore parts of the Affordable Care Act. Ruth Bader Ginsburg, in her dissent, argued strongly that the majority was turning that RFRA into a protean tool for all sorts of evasions. As Jeffrey Toobin has noted, she was proved right even before the Indiana controversy.

Both of those factors have combined to produce real confusion about the Indiana law. Some people are not being straightforward about its implications, whether because they are calculating, mortified, or—in the case of opponents, some of whom have also been unclear about what the law means—alarmed, but it also inhabits novel legal territory, so it is genuinely hard to know what those implications would be.  Governor Pence has done much to muddle things even more. On Sunday, on “This Week,” George Stephanopoulos asked Pence “a yes-or-no question” about whether “a florist in Indiana can now refuse to serve a gay couple without fear of punishment.” He asked half a dozen times, but never got an answer:

Pence: This is not about discrimination, this is about …

Stephanopoulos: But let me try to pin you …

Pence: Well—well, this—there’s been shameless rhetoric about my state and about this law and about its intention all over the Internet. People are trying to make it about one particular issue. And now you’re doing that as well.

Pence strongly suggested that Indiana’s law was identical to the federal Religious Freedom Restoration Act and to laws in twenty states that bear the same name. In a more careful formulation, in the Wall Street Journalon Tuesday, Pence said that the Indiana law “simply mirrors federal law that President Bill Clinton signed in 1993”—which is correct only if the mirror is the kind that adds twenty pounds when you look in it. Pence also said that Barack Obama, as an Illinois State Senator, had voted for a Religious Freedom Restoration Act with the “the very same language” as Indiana’s law; Politifactrated that claim only “half true.” The law has, in fact, been tweaked in ways that seem designed to maximize the effect of the Hobby Lobby decision. In that decision, the Justices found that the “person” with religious beliefs referred to in the federal RFRA could be a closely held for-profit company. (That is what Hobby Lobby is, so the opinion didn’t have to settle the question of whether other kinds of corporations had the same religious freedom.) The Indiana law went farther down that path: it explicitly covers “a partnership, a limited liability company, a corporation, a company, a firm, a society, a joint-stock company, an unincorporated association, or another entity.” (It also says that the religious human beings behind a company only have to have “substantial ownership” of it—not even majority control—for the company to be covered by the act.) The Indiana law is also distinct in that the government does not need to be a party to the case, multiplying the potential number of lawsuits it can be used in. And there are, as Politifact and others have noted, contextual differences: other states, including Illinois, have laws against discriminating on the basis of sexual orientation, which prevent some of the potential ill uses of the Indiana RFRA(Existing laws explain why racial discrimination is less of a RFRA problem, as the Indianapolis Star pointed out in a very good survey of the law.) Indiana, again, does not, though some municipalities in the state do. And that was before Hobby Lobby.

A RFRA of some kind is not, in the abstract, a terrible idea. In the simplest terms, RFRAs offer someone who violates certain laws a defense: the law is a restriction on my religious practice; the state has another, less intrusive way to accomplish what it wants, and exempting me does not thwart some compelling state interest. The inspiration for RFRAs was the prosecution of Native Americans for rituals involving peyote. It is logical for the government, for example, to find a way to allow a Sikh to keep his turban on even in a place where regulations say that hats must be removed, and should be easy to do without creating a security problem. But the idea of religious practice seems to have morphed to include a vague sense of offense at the lives of others. In Hobby Lobby, it was corporate owners who felt “implicated” by the contraceptive decisions of the employees whose health insurance they helped pay for. A Heritage Foundation paper cited a baker who thought that his religious freedom would be infringed upon if he delivered his goods to a same-sex wedding, because, he said, “when I do a cake, I feel like I am participating in the ceremony or the event or the celebration that the cake is for”—as if he were being forced to get gay-married himself.

For the moment, Indiana’s RFRA is open-ended. Its true reach will not be tested until some florists or bakers—or doctors or teachers, manufacturers or insurers—get to court, and perhaps gain victories that realize the most profound concerns about the law. (Hobby Lobby was once considered a long shot.) That contingency is why its supporters have been able to deny that it offers a license to discriminate. Pence, in his Wall Street Journal piece, took great offense at that notion, and then almost immediately cited a law professor who said that the law would give “valuable guidance to Indiana courts.” As Pence put it, “RFRA only provides a mechanism to address claims, not a license for private parties to deny services.” Perhaps it is more accurate, then, to call it a mechanism to discriminate, rather than a license. What it certainly will do is give some people more confidence to discriminate. But is that what Indiana really wants? And is that what the G.O.P.’s 2016 candidates should be looking for?