Who’s the Real Troublemaker in the Middle East? 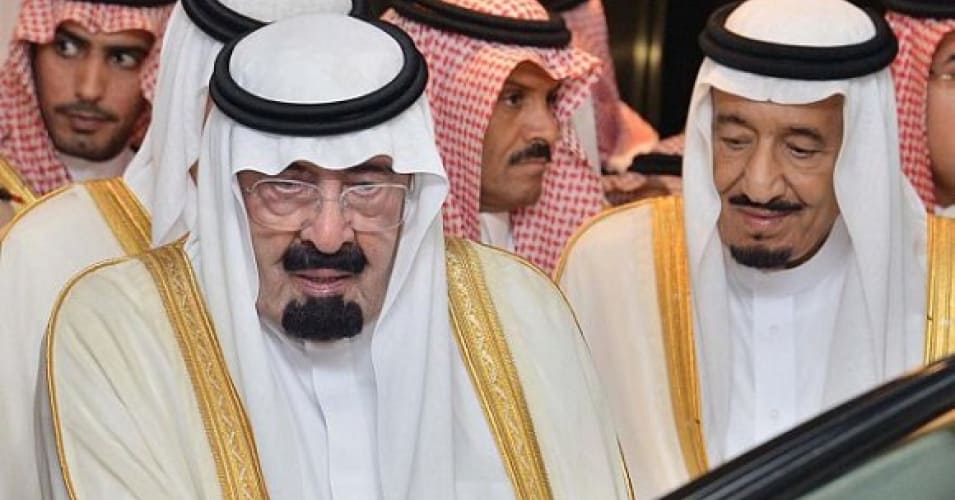 Late King Abdullah and King Salman, then the Crown Prince. (Photo: Tribes of the World/ Flickr)

Except for maybe the Affordable Care Act, nothing gets Republican politicians fired up like Iran.

In the first GOP debate alone, Scott Walker promised that he’d tear up the Iran nuclear deal on day one of his presidency. Carly Fiorina blamed the country for “most of the evil that is going on in the Middle East.” Mike Huckabee vowed to topple the “terrorist Iranian regime and defeat the evil forces of radical Islam.”

Oddly, when the candidates complain about the “evil forces of radical Islam” or trouble in the Middle East, they never seem to mention Saudi Arabia.

Iran’s no democratic paradise. But on many counts, Washington’s Saudi allies are even worse. The Saudi royals crush dissent with an iron fist, spread extremist ideology, and invade their neighbors with impunity.

Saudi blogger Raif Badawi, for example, was sentenced to 10 years in prison and 1,000 lashes just for writing a blog the government considered critical of its rule. Hundreds of political prisoners languish in prison — including Badawi’s lawyer, who was sentenced to 15 years for his role as a human rights attorney. New legislation effectively equates criticism of the government and other peaceful activities with terrorism.

Saudi women aren’t permitted to appear in public without adhering to a strict dress code. They need the approval of a male guardian to marry, travel, enroll in a university, or obtain a passport, and they’re prohibited from driving.

The penalties for defiance are steep.

Saudi Arabia has one of the highest execution rates in the world, killing scores of people each year for a range of offenses including adultery, apostasy, drug use, and sorcery. It’s conducted over 100 public beheadings this year alone.

Meanwhile, the Saudi monarchy has used its military and financial might to impose its will throughout the Middle East.

In their latest military intervention, the Saudis have used American-made cluster bombs and F-15 fighter jets in a bombing campaign over Yemen that’s killed and injured thousands of civilians and created a severe humanitarian crisis.

All the while, they’ve helped export an extremist interpretation of Islam around the globe. Let’s not forget that 15 of the 19 hijackers who carried out the 9/11 attacks were Saudis, as well as Osama bin Laden himself.

Despite all these abuses, Saudi Arabia has been a key U.S. ally for decades. Why?

One reason is oil: Saudi Arabia is the world’s second largest producer, trailing only the United States itself.

Another is the arms trade: The country is the largest purchaser of American-made weapons. In 2010, the U.S. government concluded a $60.5 billion arms deal with the Saudis — the largest in history. This means that for years to come, U.S. weapons will be used by the Saudis to maintain their repressive rule and impose their will on neighboring countries.

A third reason, ironically, is Iran. Since 1979, Washington’s pursued a policy of building up the Saudi military as a counterweight to Iran’s revolutionary government.

For Republican presidential candidates, this primary season is all about vilifying Iran. While they beat up on the White House for making peace with America’s enemies, maybe voters should ask them more questions about America’s friends.

Medea Benjamin (medea@globalexchange.org), cofounder of Global Exchange andCODEPINK: Women for Peace, is the author of Drone Warfare: Killing by Remote Control. Her previous books include Don’t Be Afraid Gringo: A Honduran Woman Speaks from the Heart., and (with Jodie Evans) Stop the Next War Now (Inner Ocean Action Guide).