Where is the Great Al Qaeda Courtroom Drama? 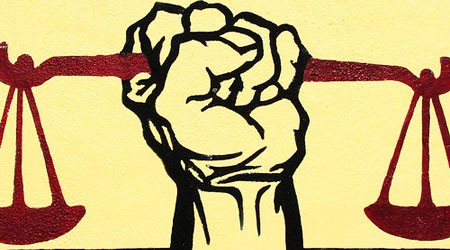 This is a country that likes trials of the century—a couple of them a year, if possible. We’ve also, as politicians remind us, been convulsed as a nation by the September 11th attacks, which are supposed to have changed our expectations of everything from Presidents to airplane rides and privacy. The one thing that the memory of 9/11 hasn’t had the power to do, strangely, is get us engrossed in the actual judicial proceedings involving members of Al Qaeda. When it comes to bringing terrorists to justice in a courtroom, we seem to get bored.

The military commission trying Abd al-Rahim al-Nashiri, accused of being behind Al Qaeda’s attack, in 2000, on the U.S.S. Cole, convened for hearings this week in Guantánamo Bay; only one reporter, Carol Rosenberg of the Miami Herald, made it down there. Sulaiman Abu Ghaith, Osama bin Laden’s son-in-law, goes on trial next week, for alleged involvement in post-2001 plots, with his lawyers coming closer to eliciting testimony from Khalid Sheikh Mohammed, the professed 9/11 mastermind. K.S.M. himself may not go to trial until next year; there have been repeated delays. But who would even know if there weren’t? Although they were followed closely in certain quarters, the eyes of the nation have not exactly turned to his pre-trial hearings, which have staggered along at Guantánamo, like an out-of-town show that no one has any intention of seeing. The week after next, K.S.M. will have been our prisoner for eleven years, and we haven’t managed to convict him of anything. What happened to the desire for a big trial to show the world what our legal system can accomplish?

What is odd is that the name “Al Qaeda” is still toxically stimulating—but only, it seems, when it is applied to Benghazi or to activity on the phone lines of Americans. It has power when it is used politically, theoretically, abstractly—as a measure of distance from a certain ideology, or in the service of the story someone wants to tell, or as a way to ignore restraints. When it comes to a prisoner and the proceedings (or lack of them) against him, though, “Al Qaeda” seems to have a somnolent quality. We just want to be woken up in a few years, after whatever ruling comes down from whatever judge has been assigned to cases we haven’t sorted out. There is a vague sense that the term “bringing to justice” only has to do with drones.

Why is this? It’s not just a matter of attention span—again, Americans love following trials. But maybe they like real trials; the kind that move to the logic we’ve learned from a thousand shows. Most of the defendants aren’t being tried, say, in the Southern District of New York, in the city where people were murdered on 9/11. Instead, it’s all taking place in tossed-together military commissions at Guantánamo, with no party really sure how it’s all supposed to work. Sometimes “unprecedented” means momentous; sometimes it means that nobody knows basic rules, like whether the judge or the prison-camp commander gets to decide what the defendants wear. The pretrial hearings for K.S.M. and the other alleged 9/11 conspirators have, at times, been like bizarre exercises in legal improv—embarrassing to watch. Last week, prosecutors added a conspiracy charge to the case against Abd al Hadi al Iraqi. This would, as Charlie Savage, of theTimes pointed out, be a straightforward move if these were prosecutors in a real court (and, lest anyone forget, we have plenty of real courts available in this country). But no one is sure if conspiracy, which is not an internationally recognized war crime, is something you can try before a military commission. So there will likely be more hearings, delays, and litigation—just to establish the parameters.

The Nashiri hearing halted almost at once, because the defendant may want to fire one of his lawyers, in what a member of his legal team described to Rosenberg as an act of frustration. (He’s also been a prisoner for eleven years, and he was waterboarded in a secret prison.) John Clodfelter, who lost his son Kenneth in the U.S.S. Cole attack, told Rosenberg that he would keep coming to Guantánamo for the hearings no matter what, and that he was “past disappointed a long time ago.”

Sometimes, there’s just not much to see. Guantánamo’s restrictions on press coverage have always been tight, but they are getting ridiculous. The prison doesn’t say any more how many detainees are engaged in hunger strikes. Guards aren’t allowed to tell reporters their own names. Even military lawyers, when testifying, have begun using fake names —“Major Krueger” was a recent one—even though, as Rosenberg noted, lawyers in the same roles used their names in earlier proceedings. Pictures and videos are restricted, including one of the base Santa Claus. Transcripts are heavily redacted. “With the current crackdown on information it’s important to be down here as much as possible. Hearings can provide a window into the prison,” Rosenberg wrote to me. It also makes it more of a gamble for a news organization, and more cloudy for anyone trying to follow along at home.

There is not enough to see in another sense, too. In more than a decade at Guantánamo, there have only been seven convictions, a number of them the result of plea bargains. A Human Rights Watch report noted, “The average time between arrest and conviction in federal court for the main defendants in the top 50 terrorism plots was 1.4 years. The average time in the military commissions between initial capture and conviction for all seven detainees prosecuted was 7.9 years.” But then half of the hundred and fifty-five prisoners at Guantánamo have no trial, protracted or not, to look forward to: they have been cleared for release but are still there. Should we just tell them to keep watching?