Where Did Our ‘Inalienable Rights’ Go?

Google and Amazon do not indict, prosecute and jail the people they track and bug. Our rights must not be so casually bartered as our Facebook chatter. Remember “inalienable”? 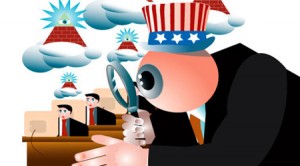 NOW that we sense the magnitude of our government’s effort to track Americans’ telephone and Internet transactions, the issue finally and fully before us is not how we balance personal privacy with police efficiency.

We have long since surrendered a record of our curiosities and fantasies to Google. We have broadcast our tastes and addictions for the convenience of one-button Amazon shopping. We have published our health and financial histories in exchange for better and faster hospital and bank services. We have bellowed our angers and frustrations for all to overhear while we walk the streets or ride a bus. Privacy is a currency that we all now routinely spend to purchase convenience.

But Google and Amazon do not indict, prosecute and jail the people they track and bug. The issue raised by the National Security Agency’s data vacuuming is how to protect our civil liberty against the anxious pursuit of civic security. Our rights must not be so casually bartered as our Facebook chatter. Remember “inalienable”?

I envy the commentators who, after a few days of vague discussion, think they have heard enough to strike the balance between liberty and security. Many seem confident that the government is doing nothing more than relieving Verizon and AT&T and Facebook of their storage problems, so that government agents can, on occasion, sift through years of phone and Internet records if they need to find a contact with a suspicious foreigner. Many Americans accept assurances that specific conversations are only rarely exhumed and only if the oddly named Foreign Intelligence Surveillance Court allows it. Such sifting and warrants — in unexplained combination with more conventional intelligence efforts — are now said, by President Obama and his team, to have prevented several dozen potential terrorist attacks, with elliptical references to threats against New York City’s subways and stock exchange.

Even if true and satisfying, these assurances are now being publicized only because this huge data-gathering effort can no longer be denied. Whatever the motive for the leaks by Edward J. Snowden, they have stimulated a long-overdue public airing. Although the government’s extensive data-hauling activity was partly revealed by diligent reporters and a few disapproving government sources over the last seven years, the undeniable proof came only from Mr. Snowden’s documents. Until then, the very existence of the enterprise was “top secret” and publicly denied, even in Congressional hearings. Even now, the project remains a secret in every important respect.

As those of us who had to defend the 1971 publication of the secret Pentagon Papers about the Vietnam War have been arguing ever since, there can be no mature discussion of national security policies without the disclosure — authorized or not — of the government’s hoard of secrets.

HOW many thousands have access to these storage bins? Who decides to open any individual file and who then gains access to its content? Is there ever a chance to challenge the necessity of opening a file? And what happens to gleaned information that has no bearing whatsoever on terrorism?

Given the history of misused “secrets” in Washington, such questions are by no means paranoid. J. Edgar Hoover used F.B.I. investigations and files to smear the reputations of individuals — even to the point of intimidating presidents. Throughout the government, “security” monitors leaked personnel files to Congressional demagogues like Senator Joseph R. McCarthy to wreck the careers of officials and blacklisted citizens with claims of disloyalty. President Lyndon B. Johnson and other officials used secret files from the Internal Revenue Service to harass and intimidate political opponents. President Richard M. Nixon tried to use the C.I.A. to cover up his Watergate crimes.

Information that is gathered and managed in secret is a potent weapon — and the temptation to use it in political combat or the pursuit of crimes far removed from terrorism can be irresistible.

President Obama and other defenders of the amassing of data insist that no individual conversation or transaction is ever examined without “court” approval, meaning a warrant from the Foreign Intelligence Surveillance Court. But the court authorizes the scrutiny of more Americans than foreigners, and it is no court in the customary sense: it operates entirely in secret. Its members are federal judges from around the country, any one of whom may authorize the opening of files. Lacking any real challenge to the evidence, they function more as grand jury than court. Mr. Obama has conceded that only a handful of warrant requests have ever been turned down (a few have been modified), a success rate he attributes to government restraint.

Yet most federal judges are predisposed to defer to executive claims of national security. They are generalists with little experience in evaluating intelligence, and they are reluctant to hamper government operatives sworn to defend the nation. The same reluctance is evident among members of Congress, who pose as watchdogs but melt when they hear appeals to patriotism from the managers of the intelligence services.

In theory, Americans are in the habit of resisting government intrusions on their rights of free speech and association. Accordingly we should be skeptical of such overweening exertions. But the data-hauling has gone on for years without real challenge. When asked whether the government could not simply log individual suspicious calls without amassing a national database, Gen. Keith B. Alexander, the head of the National Security Agency, said he was open to discussing that approach, though it might delay work in a crisis. A delay of hours? Days? Weeks? Did President George W. Bush or Mr. Obama ever ask the question?

What ought to compound our skepticism is the news that there is money to be made in the mass approach. We are learning that much of the snooping is farmed out to profit-seeking corporations that have great appetites for government contracts, secured through executives who enrich themselves by shuttling between agency jobs and the contractors’ board rooms. We have privatized what should be a most solemn government activity, guaranteeing bloat and also the inevitable and ironic employ of rebellious hackers like Mr. Snowden.

Where then can we find the skeptical oversight that such a radical challenge to our freedom demands? Presidents beholden to their own bureaucracies seem disinclined to play the skeptic or even to create an elite independent commission, like the Warren Commission, which examined the assassination of President John F. Kennedy, to assess the conflict between liberty and security and point the way to reasonable balance.

Despite the predilections of federal judges to defer to the executive branch, I think in the long run we have no choice but to entrust our freedom to them. But the secret world of intelligence demands its own special, permanent court, like the United States Tax Court, whose members are confirmed by the Senate for terms that allow them to become real experts in the subject. Such a court should inform the public about the nature of its cases and its record of approvals and denials. Most important, it should summon special attorneys to test the government’s secret evidence in every case, so that a full court hears a genuine adversarial debate before intruding on a citizen’s civil rights. That, too, might cost a little time in some crisis. There’s no escaping the fact that freedom is expensive.