What’s Spooky About the FBI’s Fleet of Spy Planes? 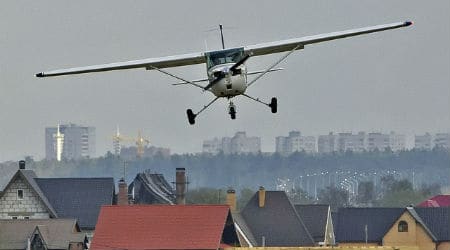 Following up on a May story by the Washington Post about mysterious aircraft spotted circling over Baltimore, the Associated Press reported today that the FBI maintains a secret air force with scores of small aircraft registered with 13 front companies under apparently false names, and that these planes fly over American cities frequently.

Obviously law enforcement has been using aircraft for many decades. So what’s spooky about this story? Several things:

In the end, it doesn’t make sense for drones to be subject to privacy regulations, but not manned aircraft. Manned aircraft can and do raise very real privacy concerns; for example their use in persistent wide-area surveillance, and in voyeurism incidents. But manned aircraft are not regulated today, because historically they have been expensive and their use therefore relatively rare, and their surveillance abilities well-understood and relatively limited. What this story tells us is that their use is now more widespread than we thought—and we know their surveillance capabilities are growing by leaps and bounds. Drones, by raising the prospect of endless free and easy aerial surveillance, have brought to the fore issues that already existed with manned aircraft, and new regulations designed to protect against aerial surveillance should not distinguish between manned and unmanned aircraft.

Jay Stanley (@JayCStanley) is Senior Policy Analyst with the ACLU’s Speech, Privacy and Technology Project, where he researches, writes and speaks about technology-related privacy and civil liberties issues and their future.