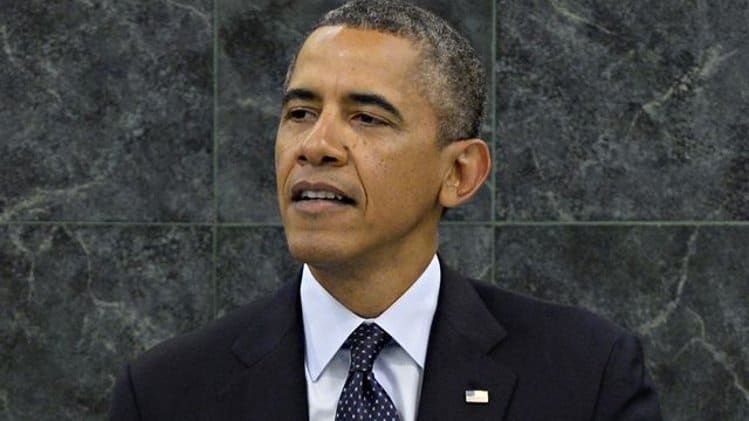 In defending the idea of ‘American exceptionalism’ on the world stage, there was plenty Obama left out of his UN speech on Tuesday. (Photo: AP)

In his speech Tuesday before the United Nations General Assembly, President Obama made important and valid points on the issues of human rights, arms control, and global governance. But note what the President did NOT say.

The President addressed Russian and Chinese obstructionism on Syria. Their abuse of veto power has, in the words of U.S. ambassador to the United Nations Samantha Power, held the Security Council “hostage.”

By comparison, the United States has used its veto power during this period 83 times, most recently when Obama ordered a veto of an otherwise-unanimous UN Security Council resolution reiterating the illegality of Israeli settlements in territories under foreign belligerent occupation and calling for a freeze on the construction of new settlements.

Another issue the President raised is the proliferation of nuclear weapons, and, in particular, Iran’s nuclear program. President Obama has successfully pushed the UN Security Council to impose tough sanctions against Iran for violating a series of UN Security Council resolutions by failing to halt its uranium enrichment program.

But the United States has blocked enforcement of other UN Security Council resolutions targeting the nuclear programs of U.S. allies which—unlike Iran—actually have nuclear weapons.

UN Security Council resolution 487 calls on Israel to place its nuclear facilities under the trusteeship of the International Atomic Energy Agency. UN Security Council resolution 1137 calls on India and Pakistan to eliminate their nuclear arsenals and long-range missiles. But the Obama Administration has not only refused to support implementing these resolutions, it provides all three countries with nuclear-capable jet fighters and other military assistance.

Similarly, the Obama Administration has repeatedly blocked the convening of a long-planned international conference on the establishment of a nuclear weapons free zone for the Middle East (similar to those already successfully established for Latin America, Africa, the South Pacific, Southeast Asia, and Central Asia), as called for in UN Security Council resolution 687 and the most recent conference of the Nuclear Nonproliferation Treaty.

In 2003, the United States blocked a draft UN Security Council resolution reiterating calls for the establishment of such a nuclear weapons-free zone.

While the Obama Administration has reversed the outright opposition of previous U.S. administrations to the concept, the U.S. obsession with Iran’s civilian nuclear program while blocking progress on such region-wide disarmament initiatives gives the United States little credibility in addressing these important security concerns.

Another theme in the President’s speech was democracy and human rights. President Obama reiterated his call for greater respect by the world’s nations for fundamental civil and political rights.

But the President did not address the fact that the United States remains the number one military, economic, and diplomatic supporter of the world’s remaining autocratic regimes and occupation armies.

Human rights abuses in Syria, Iran, Sudan and other autocratic regimes opposed by the United States indeed must be challenged. But the continuing flow of U.S. arms and other security assistance to repressive dictatorships and its attacks on the UN Human Rights Council and reputable international jurists for documenting war crimes by U.S. allies makes it difficult for the Obama Administration to take the high moral ground.

President Obama has frequently spoken of the United States as an indispensable and exceptional nation. He repeated that idea today.

“Some may disagree, but I believe America is exceptional,” Obama said in his speech, taking a swipe at Russian president Vladimir Putin’s op-ed in the New York Timeschallenging that notion.

But U.S. exceptionalism cannot be based on military and economic power alone, but on a willingness to apply the values Obama and other American leaders have espoused as universal principles—not as political talking points to be applied narrowly for our own geo-political purposes.

Stephen Zunes is a professor of politics and chair of Middle Eastern studies at the University of San Francisco and serves as a contributing editor of Tikkun. His most recent book, co-authored with Jacob Mundy, is Western Sahara: War, Nationalism, and Conflict Irresolution(Syracuse University Press, 2010.)