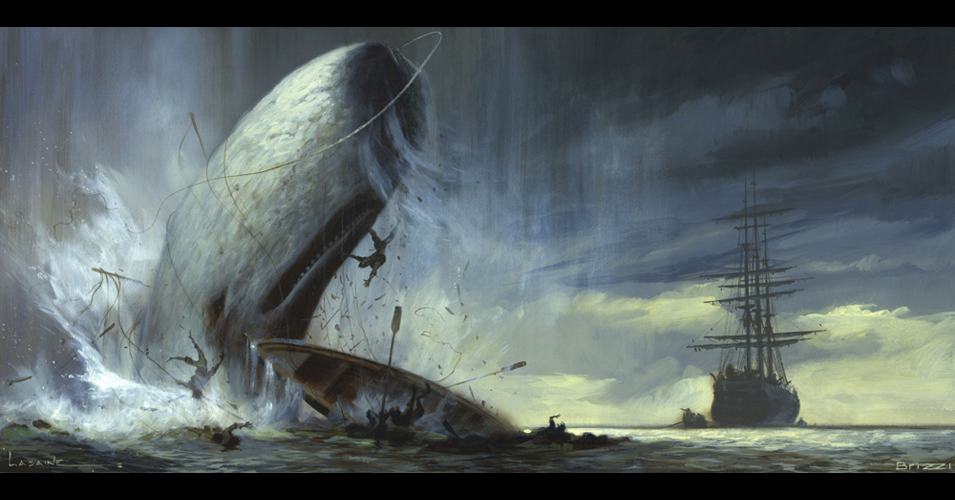 Vietnam is surely haunting the U.S. in Iraq, as Tony Burman wrote here last week. But something scary and vague is always haunting the U.S.: not just the sellout at Munich, the Berlin Wall, or the battle of Little Big Horn. Maybe it’s hauntedness itself. I happened to rewatch Apocalypse Now last week, Coppola’s Vietnam epic based on Conrad’s Heart of Darkness, about colonialism in Africa. “The horror, the horror,” breathes Brando hauntingly at the end. U.S. policy always manages to metaphysicalize itself out of specifics and into abstractions.

The cultural source of this pattern is Captain Ahab’s pursuit of the white whale in Moby Dick, written in 1851. It’s the whiteness that’s hypnotic. “Were it not for the whiteness, you would not have that intensified terror,” says the narrator. Interesting word to use, at a time when terror hadn’t yet become an ism, though it had been a reign (of).

Whiteness lets you project anything you choose onto it, it’s like green screen today (Moby Dick as the green whale?). Ahab says, “Sometimes I think there’s naught beyond. But ’tis enough … I will wreak that hate on him.” The U.S. always projected this way; it’s a metaphysical country.

During the Cold War, writes Greg Grandin, “politics was often presented as metaphysics.” Nazis and Soviets “were understood as motiveless, driven by a hatred of freedom.” So when W. said “because they hate our freedoms,” to explain 9/11, it wasn’t as butt ignorant as he sounded. He was in the tradition. Same for Reagan calling the Soviet Union the evil empire in the 1980s. They have a genius for ignoring specifics or causes, and jumping to moral absolutes.

So last week at Ramadi, the U.S. called Iraqis cowards for fleeing before ISIS, who are sheer evil. As if it all happened out of time: no 35 years of war and invasion, sanctions, displacement, death, in which U.S. policy was central. Just sheer cowardice on one side; pure evil on the other. No background required.

In a way, ISIS is the perfect cosmic dance partner for this U.S. mindset. Soviet communism was always a slightly bad fit: too much economic specificity and social class analysis. In the Mideast today all other applicants for infernal enemy have been dispatched: nationalism (Nasser) of the 1950s, socialism of the early Baath Party, national liberationism of Arafat’s PLO. Even the modest ambitions of the two-state solution.

What survives as antagonist is the deep, unuprootable force of simplistic religion, especially ISIS. Compared to ISIS, Hamas and Hezbollah are subtle, pragmatic entities. ISIS shares with U.S. policy the sheer good versus evil, us against them, non-exploration of reality. Shall we dance?

This helps explain, by the way, ISIS’ “phenomenal success at recruiting young people from around the world” (Al Jazeera). Youth, due to its limited experience, tends to gravitate to absolutes. If it rejects, with cause, the absolutes of U.S. policy, it moves easily to a separate but equal absolutism.

And what of Canada? I’m inclined to see as a national cultural strength our rejection of metaphysical mythmaking. Or maybe it’s just ineptitude. Perhaps it results from seeing the many idiocies and disasters the U.S. falls into. But with Stephen Harper’s war on terror, the white whale has come to Canada. He says we “are targeted by these terrorists for no other reason than that we are Canadians. They want to harm us because they hate our society and the values it represents.” W. could have said that. Or Reagan. Or Ahab. The risks of ISIS in Canada seem small, but less so if you metaphysicalize them wildly.

It’s what Harper will run on in the coming election, and it’s a prescription for future elections if it works, since pure evil can’t ever be vanquished. This may be our first metaphysical election but, given our system, he’ll need far less than a majority of votes to extend his transcendental policy abstractions.

Ahab’s first mate is Starbuck, for whom the coffee chain is named. He takes an anti-metaphysical stance: “Vengeance on a dumb brute! That simply smote thee from blindest instinct! Madness!” Starbuck hits a Canadian note, as Harper hits an American one. Of course these things aren’t strictly geographical.

Rick Salutin is a Canadian novelist, playwright, journalist, and critic and has been writing for more than forty years. Until October 1, 2010, he wrote a regular column in the Globe and Mail; on February 11, 2011, he began a weekly column in the Toronto Star.