What did your elected reps think of Syria strike? Mostly they were OK with it. 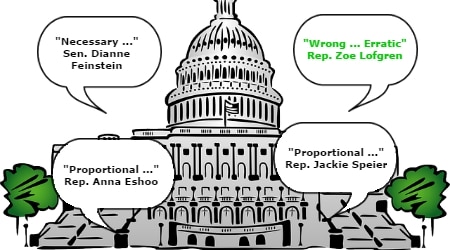 “The horrors the Syrian people have been subjected to by Bashar al-Assad are beyond any boundaries of human behavior.

“Last night’s airstrikes appear to be proportional to the use of chemical weapons. However, should the President intend to escalate U.S. military involvement in Syria, he must come to Congress for an Authorization for Use of Military Force.”

Zoe Lofgren Statement on US Military Strike on Syria

“It was done without Congressional debate or approval in violation of the War Powers Act and the Constitution. Congress should immediately reconvene. When we do we should remember the disastrous history of wars waged by America in the Middle East which killed hundreds of thousands and displaced millions more, while nurturing the growth of radical threats like ISIS, Al`Qaeda, Jabhat al-Nusra and Ahrar al-Sham.

“The missile attack appears to be an erratic reaction unconnected to any coherent strategy. Trump says the bombing was in response to the terrible chemical weapon attack on civilians. Yet Trump is unmoved by the deaths of Syrian refugee children at sea and continues to malign and bar Syrian refugee families fleeing the cauldron of war.

“The attack is a mistake with potentially disastrous consequences. Any further action must be put before Congress and debated in public with the international and domestic consequences fully considered. When this is done, I expect that Congress will conclude that further military attacks of this sort are the wrong policy.”

“Last night’s strikes against Syrian regime forces constituted a proportional response to President Assad’s horrific sarin gas attack against innocent civilians. These strikes, however, were conducted without Congressional authorization as required under the Constitution of the United States. I urge Speaker Ryan to call Members back to Washington to debate a new Authorization for the Use of Military Force that would provide the necessary legal basis for any future military action.

“The atrocities in Syria cannot be halted with force alone. President Trump belatedly realized that Assad is a butcher enabled by Vladimir Putin; he must now lead the international community in a diplomatic response to the years-long crisis that has left hundreds of thousands dead and millions displaced. During his planned trip to Moscow, Secretary of State Tillerson must challenge his counterparts to acknowledge the facts and accept responsibility for the tragic results of Russian obstruction in the region. The President must also acknowledge that shuttering our borders against those in the greatest need of refuge – including the children and babies he has recently spoken of, but his immigration policies so heartlessly excluded – stands contrary to our values and the best interests of the United States.”

“Last night’s cruise missile strikes against the Syrian airfield that launched the chemical weapons attack was a limited but necessary response to those heinous acts, and I hope the intended message was received. The United States cannot continue to stand by and watch Assad commit these atrocities.” Read Feinstein’s full statement

My statement on U.S. military action in Syria. pic.twitter.com/vaVtA5ObMp