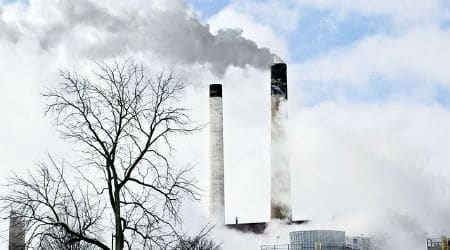 The death of Supreme Court Justice Antonin Scalia will have countless political and policy ramifications. But here’s a big one: President Obama’s plan to tackle global warming is in considerably less legal peril than it was just three days ago.

Last Thursday, the Supreme Court surprised everyone by voting 5-4 to issue a stay and delay enforcement of Obama’s Clean Power Plan, a major EPA rule to cut carbon-dioxide emissions from the electricity sector. That suggested the Court’s five conservative justices — Scalia, Thomas, Roberts, Alito, Kennedy — harbored serious doubts about the plan and might strike it down. Analysts fretted that this, in turn, would cause the international climate deal forged at Paris to unravel.

But everything changed with Scalia’s passing and the Supreme Court split 4-4 between conservatives and liberals. The US Court of Appeals for the DC Circuit might end up playing a much bigger role in deciding the regulation’s legal fate. That’s fairly good news for Obama — although his climate plans aren’t safe just yet.

All eyes are now on the DC Circuit Court…

Industry groups and 27 states are currently suing to overturn the Clean Power Plan in court, arguing that the EPA overstepped its authority under the Clean Air Act to regulate CO2 in the way it did. (You can read up on their arguments here.)

That case is being heard by a three-judge panel of the DC Circuit Court. Oral arguments begin June 2. A decision is expected by fall.

The Obama administration looks likely to prevail in this arena. Two of the judges on that panel — Judith Rogers (a Clinton appointee) and Karen Henderson (a George H.W. Bush appointee) — have been sympathetic to environmental claims in the past. And the third judge, Sri Srinivasan, is a recent Obama appointee. So it’s entirely plausible that the DC Circuit Court will uphold the Clean Power Plan.

If that happens, the Supreme Court would then decide whether to take the case. If they did and made a ruling before Scalia’s replacement was named — i.e., SCOTUS was split 4-4 — then the DC Circuit Court’s decision would be upheld without creating precedent. The Clean Power Plan would remain in place.

Alternatively, the Supreme Court could postpone any decision until a replacement was named.** In that case, the presidential election would be paramount. If someone like Hillary Clinton became president and confirmed a liberal justice before the Supreme Court decided, the climate plan would likely survive.

By contrast, if a Republican like Ted Cruz won the White House, had a GOP majority in the Senate, and confirmed a conservative justice before the Supreme Court decided, the Clean Power Plan would be in danger. (Though this depends on how Anthony Kennedy votes.) But in that second scenario, the plan would’ve been in danger anyway: a President Cruz could just scotch the rule, either through administrative actions or by legislation. More on that below.

As noted above, Obama isn’t in the clear yet. There are still two major ways the Clean Power Plan could die or get weakened significantly:

The EPA clearly has broad authority to regulate CO2 emissions under the Clean Air Act — the Supreme Court said as much in 2007. But the EPA got rather creative in devising the Clean Power Plan, in order to give states lots of flexibility to cut emissions. So it’s possible the DC Circuit Court could find problems with the regulation.

Among other things, critics of the rule argue that Section 111(d) of the Clean Air Act was never meant to be used this way. (They point to the fact that the House and Senate passed inconsistent versions of the text of this section back in 1990.) Opponents also argue that the EPA took an unprecedented approach by assuming states could take actions “outside the fence line” of existing power plants to cut emissions. In other words, when setting pollution targets for coal- and gas-fired plants, the EPA assumed utilities could build wind and solar farms elsewhere. If the judges take issue with that approach, they could weaken the rule.

So we’ll see. In the past, the DC Circuit Court has been quite deferential to the EPA on regulatory issues. That’s why a number of legal observers think it’s likely the Clean Power Plan survives.

2) What if a Republican wins the White House in 2016? This is the big one. The ultimate fate of Obama’s climate plans depends on the 2016 election — just as it always has.

If a Republican hostile to CO2 regulations, like Ted Cruz or Marco Rubio, wins the White House in November and has a clear majority in Congress, then they might be able to get a justice through in time to overturn the Clean Power Plan.

But in this situation, a Republican president and GOP Congress could also just repeal the Clean Power Plan entirely by passing a bill. The Supreme Court question would be moot. And if Congress can’t act, then the president could order the EPA to redo the regulation, although this would be a relatively arduous process.

So the survival of the Clean Power Plan isn’t assured. But the prognosis looks moderately better today than it did on Friday.

How important is the Clean Power Plan, anyway?

One final note: After the Supreme Court issued its stay last week, I saw a number ofanalyses hinting that maybe the Clean Power Plan wasn’t that critical after all, since many utilities were moving toward clean energy anyway. That seemed wrong to me. Or at least incomplete.

It’s true that there are myriad other forces presently pushing the United States toward cleaner energy. The natural gas boom is crushing coal power. Congress just renewed key tax credits for wind and solar through 2020. Many states, like California and New York, are already working on plans to green their grids. Even if the Clean Power Plan fell, these dynamics would remain in place. Coal power would still be dying.

Fair enough. But the Clean Power Plan would likely lead to significant changes over and beyond those existing trends. If enacted, it would prod the dozens of red states that weren’t already thinking about clean energy to do so. It would maintain support for renewable energy after those solar and wind tax credits finally expired in 2020. The rule was already leading some states to consider plans for carbon trading — which could lay the groundwork for deeper reductions down the road.

That’s why many analysts, like those at the Rhodium Group, think it would be exceedingly difficult for the United States to meet its climate goals — cutting greenhouse gas emissions 26 to 28 percent below 2005 levels by 2025 — without the Clean Power Plan in place. Clean energy is already growing, yes. But the EPA rule was expected to accelerate that process. It’s not everything, but it’s still a big deal.

** Footnote: It’s still uncertain when the Supreme Court would actually rule on a Clean Power Plan case, if it came to that. They could conceivably hear oral arguments as early as February of 2017, if the DC Circuit Court moves quickly. Or they could decide to delay arguments and a ruling until Scalia’s replacement has been appointed to the bench, as Tom Goldstein argues. I’ve updated this section to reflect that uncertainty.