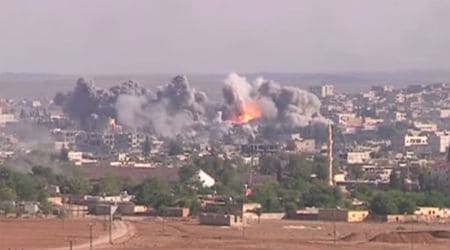 by Trevor Timm
The Guardian

This Saturday [Aug. 8] marks one full year since the US military began its still-undeclared war against Islamic State that the government officials openly acknowledge will last indefinitely. What do we have to show for it? So far, billions of dollars have been spent, thousands of bombs have been dropped, hundreds of civilians have been killed and Isis is no weaker than it was last August, when the airstrikes began.

But don’t take it from me – that’s the conclusion of the US intelligence community itself. As the Associated Press reported a few days ago, the consensus view of the US intelligence agencies is that Isis is just as powerful as it was a year ago, and they can replace fighters faster than they are getting killed.

Like it does for every stagnant and endless war, this inconvenient fact will likely only lead others to call for more killing, rather than an introspection on why continuing to bomb the same region for decades does not actually work. Perhaps we’re not firing missiles at a high enough rate, they’ll say, perhaps we need a full-scale ground invasion, or perhaps we need to kill more civilians to really damage the enemy (yes, this is an actual argument war mongers have been making).

Speaking of civilian deaths, they’ve barely gotten mention in the media over the past twelve months, likely because the US military has, somewhat incredibly,only admitted to two civilians casualties in an entire year of airstrikes spanning multiple countries. A new report by journalists and researchers in the regionargues that the real number is probably around 500 civilians. Good luck getting the US military to come close to acknowledging that, though. Despite credible reports about civilian casualties almost immediately after the war started, it took the US nearly six months to admit there were any at all. And it’s tougher than ever for members of the media to travel into these war zones, and even when they head over with military officials, they are tightly restricted.

For now, there are already plans to launch more drone strikes in Libya, increasedair power in Syria and who knows what is in store for Iraq. What the next year will bring as US presidential candidates vie for who can be “tougher” against Isis is anyone’s guess.

The war-hungry contingent is aided by an increasingly hysterical media which will gladly blare Isis’ terrorism message to maximum effect, while never asking if US actions are actually the thing causing so many terrorists to supposedly target the US. The New York Times front-page headline on Tuesday is a perfect example of the skeptical-free reporting that will keep the public rearing to go for more military action: “Isis or Al Qaeda? American Officials Split Over Top Terror Threat.”

Still, not a single attack involving Isis inside the United States has occurred, but that hasn’t stopped government officials from proposing multiple new laws that would invade our privacy and erode our constitutional rights.

One year on, we’re now seemingly farther away from Congressional authorization for this war than we’ve ever been. This time last year, there were a range of op-eds from legal experts across the political spectrum explaining that a sustained war against Isis is plainly illegal if Congress does not vote on it. Now, that’s virtually been forgotten. Most news organizations don’t bother bringing up the subject anymore, and even the nascent talk in Congress has all but evaporated.

So the White House is seemingly free to use the authorization for war in Afghanistan to fight a war in Syria and Iraq, against an enemy that didn’t exist at the time al-Qaida attacked the US on 9/11 (and which al-Qaida now hates as well.) The White House has apparently expanded its reach even further, claiming it can use the al-Qaida war authorization to launch missiles at anyone trying to fight the US-backed “moderate” rebels in Syria, including Syria’s dictator, Bashar al-Assad.

Speaking of Syria, the “plan” to arm the Syrian rebels to defeat Isis, is by all accounts, a complete disaster. I say “plan” in quotation marks because it was clear from the start – even by those who engineered the policy – that arming them would not work. The CIA’s own study concluded arming revolutionary movements almost always has terrible results – the President said as much in an interview months before he proposed Congress do exactly that. Besides the CIA had been arming the rebels for years with no success.

Congress was apparently kept in the dark about the CIA study and the agency’s own arming scheme that had been going on (and not working) for two years prior.

Now the US has spent hundreds of millions on just 60 rebels, who finally entered the country, only to be promptly ambushed, where many of their members were killed or captured. The perpetrators were not Isis, but the al-Nusra Front, an al-Qaida offshoot that is also considers Isis their enemy.

It is the perfect analogy to the Isis war so far: a tragic waste with no clear goal and no end in sight.