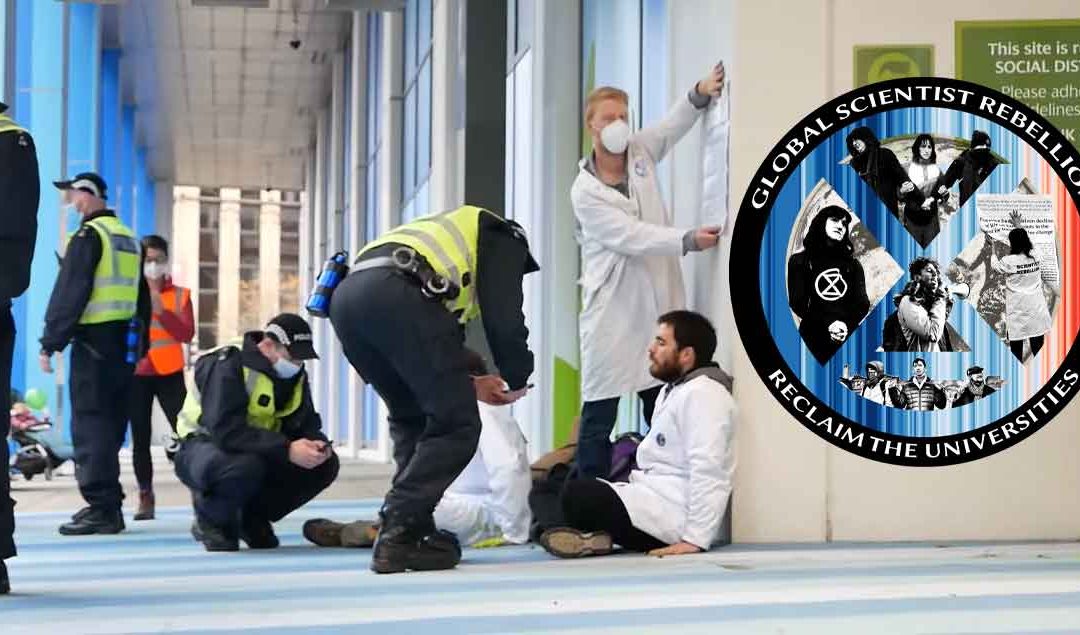 “Governments have ignored the scientists who’ve warned that we’re heading for catastrophe for decades. That’s why so many are now engaging in nonviolent civil disobedience as a last-ditch effort.”

After wrapping up a worldwide civil disobedience campaign to call for a “climate revolution,” scientists on Monday pledged to keep fighting for the ambitious action they warn is necessary to prevent the most catastrophic impacts of the fossil-fueled global emergency.

“Scientists do not know how to shout or stain walls or stop traffic. But we know how to do one thing well: learn. And we
are studying the new language to communicate the gravity of climate change,” said Fernando Valladares, a professor and Scientist Rebellion member from Spain, in a statement.

From April 3 to last Saturday, scientists across the globe participated in over 60 nonviolent direct actions in at least 26 countries. As Common Dreams reported last week, some protests led to arrests. Other scientists joined a weeklong strike from their academic work.

Peter Kalmus, a National Aeronautics and Space Administration (NASA) scientist and Scientist Rebellion member who was among those arrested, shared a video of the actions on Twitter Monday along with some reflections on the campaign.

Kalmus warned Monday that “Earth breakdown will only get worse and worse, horrifyingly, until we end the fossil fuel industry and end enclosure capitalism, and transition to a system that puts the Earth and people first.”

Scientist Rebellion also circulated the roundup video on social media and explained that the experts took to the streets because their warnings about the climate emergency have been largely ignored by decision-makers.

Governments have ignored the scientists who’ve warned that we’re heading for catastrophe for decades.

That’s why so many are now engaging in non-violent civil disobedience as a last ditch effort.

Join us & donate if you can: https://t.co/s2TENnWyc7pic.twitter.com/fv9VpPCtcg

The scientists’ week of action coincided with the release of the latest Intergovernmental Panel on Climate Change (IPCC) report, which led activists to declare that “a warming planet is humanity’s biggest emergency” and “it is a disgrace that decades of cowardly decisions by rich industrial nations have led us here.”

Scientist Rebellion’s official response to the IPCC report stated that “the science has never been clearer: To have any chance of retaining a habitable planet, greenhouse gas emissions must be cut radically now.”

Referencing the bolder temperature goal of the 2015 Paris climate agreement, the group added that “limiting warming to 1.5°C and responding to the climate emergency requires an immediate transformation across all sectors and strata of society, a mobilization of historic proportions: a climate revolution.”

United Nations Secretary-General António Guterres, in his remarks responding to the report, said that “climate activists are sometimes depicted as dangerous radicals. But the truly dangerous radicals are the countries that are increasing the production of fossil fuels.”

Climate scientist Rose Abramoff, who was arrested twice in Washington, D.C., said last week that “I think scientists need to be out here with our children, with our Indigenous, with our old and our young, every race and generation.”

Many many thanks to @climatehuman and all the other scientists standing up to the fossil-funding banks!
It’s very hard to get scientists out of the lab and into the streets–but they understand how desperate the moment has becomehttps://t.co/rxWP118z9n

Kalmus suggested that “if everyone could see what I see coming, society would switch into climate emergency mode and end fossil fuels in just a few years.”

“We need a billion climate activists,” he said. “I encourage everyone to consider where we are heading as a species and to engage in civil disobedience. The time is now.”

“The needs of the poorest countries must be addressed swiftly,” Chidhoni said. “Unless we have social justice, there are not going to be more accelerated greenhouse gas reductions. These issues are inseparable.”