‘We Are Fighting Back’: Global Black Friday Strikes and Protests Seek to #MakeAmazonPay 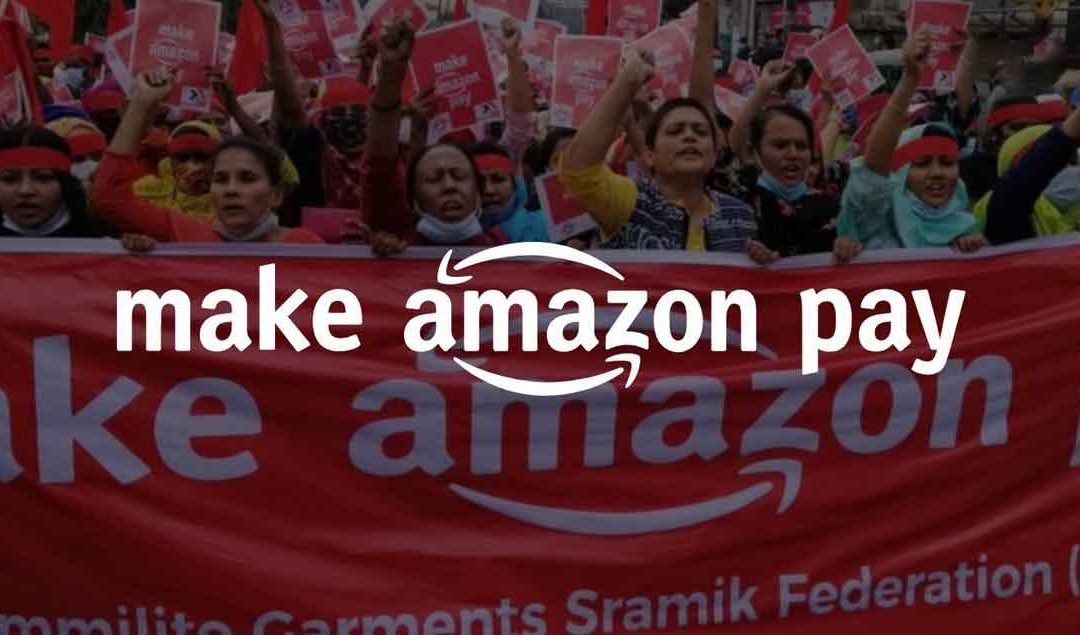 “We are workers and activists divided by geography and our role in the global economy but united in our commitment to Make Amazon Pay fair wages, its taxes, and for its impact on the planet.”

On Black Friday, more than 70 labor unions and progressive advocacy groups shut down workplaces and hit the streets in cities around the globe to demand—on Amazon’s most profitable day of the year—that the sprawling tech and logistics corporation pay a living wage to its employees and a fair share of taxes to compensate the societies in which it operates.

“From oil refineries, to factories, to warehouses, to data centers, to corporate offices in countries across the world, workers and activists are rising up in strikes, protests, and actions to Make Amazon Pay,” reads the campaign’s website. While the international coalition held its first Black Friday day of action 12 months ago, opposition to Amazon’s abuses has only grown since then, and work stoppages and rallies targeting the e-commerce giant were expected in at least 20 countries on every inhabited continent this year.

According to the Make Amazon Pay coalition, planned actions include:

“They pay little or no tax, yet their obscene wealth is actually untrammeled,” Burrow continued. She emphasized the need to “stan[d] with Amazon workers every day” and thanked unions for their solidarity.

🗣️”Today is a great day of global action and protest against one of the worst corporations of our time! Today in Brussels, Bangladesh, Berlin and Boston, and more than 20 cities on 6 continents we are coming together to #MakeAmazonPay!” @SharanBurrow pic.twitter.com/B2h34pAtqk

Amazon is headquartered in the United States, but its reach is global—with a massive workforce of roughly 1.3 million people, excluding countless others employed by the company’s subcontractors, and a carbon footprint larger than two-thirds of the world’s countries. Resistance to one of the most powerful corporate empires in history—founded by Jeff Bezos, currently the second-richest person on the planet—is also transnational.

“Amazon is everywhere, involved in almost every step of the global economy, but we are too,” explains the coalition, which includes Progressive International, UNI Global Union, Amazon Workers International, and dozens of other trade unions and civil society organizations working to stamp out inequality, tax evasion, and climate injustice.

“At every link in this chain of abuse, we are fighting back,” the coalition says. “We are workers and activists divided by geography and our role in the global economy but united in our commitment to Make Amazon Pay fair wages, its taxes, and for its impact on the planet.”

From Brazil to Bangladesh, workers are rising up in the largest mobilization against Amazon in history.

The Covid-19 pandemic, in particular, “has exposed how Amazon places profits ahead of workers, society, and our planet,” the Make Amazon Pay coalition notes on its website.

Last year, for instance, Amazon became a trillion-dollar corporation. According to a video on the coalition’s website, “Amazon’s wealth has increased so much during the pandemic that its owners could pay all 1.3 million of its employees a $690,000 Covid bonus and still be as rich as they were in 2020.”

Bezos—who didn’t pay any income taxes between 2006 and 2018, according to a June report from ProPublica—also became the first individual to amass a personal fortune of more than $200 billion. He surpassed that figure in August 2020, just a few months after he eliminated the short-lived hazard pay of Amazon employees, who have continued toiling at great risk to their own health.

In addition, Amazon’s union-busting tactics were on full display earlier this year in Bessemer, Alabama during a drive organized by the Retail Wholesale and Department Store Union (RWDSU).

Union organizers at the Bessemer warehouse came up short in the April election, but an official at the National Labor Relations Board has recommended invalidating those results and mandating a new vote after RWDSU filed nearly two dozen complaints alleging that Amazon illegally threatened employees with loss of pay and benefits, installed and surveilled an unlawful ballot collection box, and expelled pro-union workers from so-called “captive audience” meetings during which management argued against unionization.

“Like all major corporations, Amazon’s success would be impossible without the public institutions that citizens built together over generations,” the coalition stresses. “But instead of giving back to the societies that helped it grow,” the e-commerce giant “paid just 1.2% tax in the U.S.” in 2019, “up from 0% the two previous years.”

Bezos, meanwhile, said in July—immediately following his first suborbital flight, which he admitted was paid for by Amazon workers—that he thinks it would be a good idea to relocate industrial production to outer space, threatening, however unrealistically, to push capitalism’s detrimental impacts beyond Earth’s atmosphere.

A study published earlier this month found that “the emissions from a single billionaire spaceflight would exceed the lifetime emissions of someone in the poorest billion people” in the world.

In its list of demands, the Make Amazon Pay coalition says that it is fighting for better pay for Amazon’s workers—”in line with the increasing wealth of the corporation, including hazard pay and premium pay for peak times”—as well as improved working conditions and benefits, such as paid sick leave “so that no worker has to choose between their health or their job.”

The coalition also seeks to protect Amazon workers’ rights to organize as well as unions’ rights to promote the interests of employees—without fear of surveillance and retaliation, throughout the company’s global supply chains.

In addition, the campaign is pushing for Amazon to commit to zero emissions by 2030 and to eliminate “tax abuse through profit shifting, loopholes, and the use of tax havens,” among other demands to safeguard consumers’ data.

“Amazon is not alone in these bad practices,” the coalition acknowledges, “but it sits at the heart of a failed system that drives the inequality, climate breakdown, and democratic decay that scar our age.”