The vast majority of Egyptians killed since the coup have been unarmed protesters struck down with American-made weapons by soldiers transported in American-made vehicles provided by the American taxpayer. 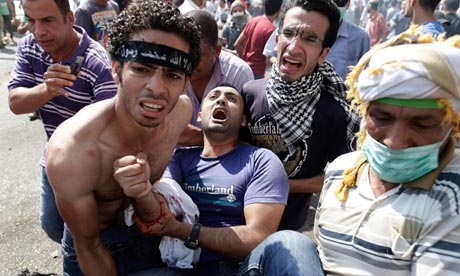 As in El Salvador, Nicaragua, East Timor, Angola, Lebanon, and Gaza in previous years, the massive killing of civilians in Egypt is being done with U.S.-provided weapons by a U.S.-backed government. As a result, the Obama administration and Congress are morally culpable for the unfolding tragedy. While the apparent decision to suspend some military aid to Egypt is certainly welcome, the role the United States has been playing has, on balance, made matters worse.

As with many of these other cases, elements of the Egyptian opposition have contributed to the bloodshed and bear some responsibility. Some members of the Muslim Brotherhood and their supporters have attacked government buildings, anti-Brotherhood protesters, libraries, museums, and churches, and many of them have been armed. This comes in the wake of the Brotherhood squandering its year in power by trying to shape the politics of the post-Mubarak era solely on its own terms, imposing unpopular social and economic policies and ruling in a semi-autocratic manner.

Indeed, the Brotherhood isolated itself by refusing to do what the Tunisian Islamists did, which was to govern as part of a broad coalition of Islamists, progressives, and traditional oppositionists. In Egypt, the Islamists instead took advantage of their plurality of support to push through their agenda unilaterally—so alienating the majority of Egyptians that millions took to the streets in protest, prompting a coup that was initially quite popular. In the aftermath, rioting by many of the Muslim Brotherhood’s supporters, combined with their refusal to consider becoming part of a civilian coalition to govern alongside the military, alienated people still further.

Yet the fact remains that the vast majority of Egyptians killed since the coup have been unarmed protesters who were struck down with American-made weapons by soldiers transported in American-made vehicles provided by the American taxpayer. Whatever one thinks of the Muslim Brotherhood’s politics or leadership style, nothing justifies the massacre of hundreds of peaceful protesters and bystanders.

Just two weeks before the August 14 massacres, the U.S. Senate defeated by an 86-13 margin a resolution to enforce U.S. law against providing military aid to regimes that seize power by military coups. The bill would have called for suspending arms transfers to Egypt and using the money for bridges and related infrastructure projects in the United States.

The violent turn in Egypt is particularly tragic since the overthrow of the U.S.-backed Mubarak dictatorship was largely nonviolent. In many ways, the 2011 revolution’s victory was a continuation of the global, nonviolent pro-democracy struggle that has brought down scores of dictatorships from the Philippines to Poland and from Chile to Serbia. Unfortunately, the Egyptian military—through the Supreme Council of the Armed Forces, which assumed control after a mass civil insurrection drove Mubarak from power—refused to hand power over to the liberal democrats who led the revolution, choosing instead to maintain their corrupt hold on key sectors of the economy and to suppress dissent. Washington rarely complained and continued to supply massive amounts of military aid as the repression continued.

When elections did finally come, liberals and progressives barely stood a chance.

Thanks to decades of repression by the notoriously brutal and corrupt U.S.-backed Mubarak regime, Egyptian civil society—despite growing markedly over the past decade—was relatively weak and inexperienced. As the time for the country’s first free elections approached, the young idealistic activists who were so tactically brilliant in the 2011 revolution found that they had neither the organizational experience nor the financial resources of the seasoned leadership of the Muslim Brotherhood, which had been organizing—often clandestinely—for many decades. Nor did they have the anything approaching the resources of the military, which fielded a presidential candidate of its own in air force commander, and former Mubarak prime minister, Ahmed Shafiq .

Once the military allowed for elections, it was through a two-round electoral system where the top two vote-getters in the first round would face each other in a runoff. Despite the Brotherhood’s advantages in organizing and the military’s powerful institutional support for their candidate, the majority of first-round votes went to liberal, democratic, and secular candidates. Because liberal forces split their votes among several contenders, however, the second round came down to the Muslim Brotherhood’s Mohamed Morsi and the military’s Ahmed Shafiq—the worst possible outcome for the pro-democracy forces that ousted Mubarak. Morsi narrowly won. As a result, though it eked out a slim majority of the vote in the runoff, the Muslim Brotherhood never had more than a plurality of support to begin with, and it lost much of that once Morsi came into office.

Still, the Brotherhood enjoys a sizeable following, albeit a minority. There are tens of millions of Egyptians who recognize that the Brotherhood won the freest election in Egyptian history and was forcibly removed from power. When Islamists have taken to the streets in protest—most, though not all, peacefully—they have been gunned down. Meanwhile, the United States refuses to even acknowledge there was a military a coup and has continued to arm the thugs who are killing them. This is not likely to encourage moderation, compromise, or better relations with the West.

Under the Military’s Boot

The struggle in Egypt is not about religion. The vast majority of Morsi’s pro-democracy opponents who took to the streets in largely nonviolent protests during the year the Muslim Brotherhood was in power were observant Muslims. It’s always been about the Muslim Brotherhood’s conservative policies and autocratic tendencies. Furthermore, despite power struggles between Morsi and military leaders while he was in office, they were quite willing to cooperate in suppressing the Egyptian left.

In many respects, ever since Mubarak’s ouster, it has been a three-way struggle among liberal democratic forces, Islamists, and the military, with the military playing one side against the other. It’s important to remember that Mubarak himself was an Egyptian military general who headed the air force prior to Anwar Sadat naming him as vice-president just before his assassination. Sadat also came from the military, as did his predecessor Gamal Abdel Nasser. In effect, the military has ruled Egypt for more than 60 years. It controls as much as one-third of the economy and has proven its willingness to do whatever it takes to stay in power, from switching sides in the Cold War to massacring its own people.

As a result, while the United States was clearly unhappy with Morsi’s victory in last year’s election, the sense was that the military had enough leverage to keep the Brotherhood from doing much to hurt U.S. interests. In addition, the Muslim Brotherhood leadership, despite its extreme antipathy toward Israel, was pragmatic enough not to threaten the Jewish state, given its vast military superiority. And, as a movement dominated by wealthy businessmen, the Brotherhood was quite willing to cooperate with U.S. economic interests and international financial institutions.

There is no evidence to suggest the United States was behind last month’s coup. It came as a result of the massive and largely nonviolent uprising in late June and early July demanding Morsi’s ouster. Unfortunately, as with the ouster of Mubarak two years earlier in a similar popular uprising, the military has hijacked the popular struggle.

In short, both the military and the Muslim Brotherhood are wrong. Neither is concerned about democracy and both are willing to use violence. The last thing the United States should be doing is continuing to pour arms into this tragic and chaotic situation and rationalize for brutal repression. 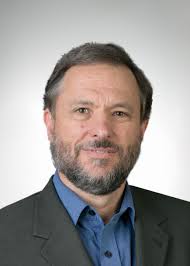 Stephen Zunes is a professor of politics and chair of Middle Eastern studies at the University of San Francisco and serves as a contributing editor of Tikkun. His most recent book, co-authored with Jacob Mundy, is Western Sahara: War, Nationalism, and Conflict Irresolution(Syracuse University Press, 2010.)