War On the Unemployed 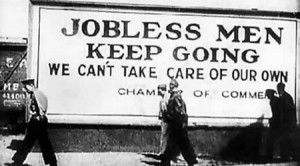 There’s a nationwide movement under way to punish the unemployed, based on the proposition that we can cure unemployment by making the jobless even more miserable.

Is life too easy for the unemployed? You may not think so, and I certainly don’t think so. But that, remarkably, is what many and perhaps most Republicans believe. And they’re acting on that belief: there’s a nationwide movement under way to punish the unemployed, based on the proposition that we can cure unemployment by making the jobless even more miserable.

Consider, for example, the case of North Carolina. The state was hit hard by the Great Recession, and its unemployment rate, at 8.8 percent, is among the highest in the nation, higher than in long-suffering California or Michigan. As is the case everywhere, many of the jobless have been out of work for six months or more, thanks to a national environment in which there are three times as many people seeking work as there are job openings.

Nonetheless, the state’s government has just sharply cut aid to the unemployed. In fact, the Republicans controlling that government were so eager to cut off aid that they didn’t just reduce the duration of benefits; they also reduced the average weekly benefit, making the state ineligible for about $700 million in federal aid to the long-term unemployed.

It’s quite a spectacle, but North Carolina isn’t alone: a number of other states have cut unemployment benefits, although none at the price of losing federal aid. And at the national level, Congress has been allowing extended benefits introduced during the economic crisis to expire, even though long-term unemployment remains at historic highs.

So what’s going on here? Is it just cruelty? Well, the G.O.P., which believes that 47 percent of Americans are “takers” mooching off the job creators, which in many states is denying health care to the poor simply to spite President Obama, isn’t exactly overflowing with compassion. But the war on the unemployed isn’t motivated solely by cruelty; rather, it’s a case of meanspiritedness converging with bad economic analysis.

In general, modern conservatives believe that our national character is being sapped by social programs that, in the memorable words of Paul Ryan, the chairman of the House Budget Committee, “turn the safety net into a hammock that lulls able-bodied people to lives of dependency and complacency.” More specifically, they believe that unemployment insurance encourages jobless workers to stay unemployed, rather than taking available jobs.

Is there anything to this belief? The average unemployment benefit in North Carolina is $299 a week, pretax; some hammock. So anyone who imagines that unemployed workers are deliberately choosing to live a life of leisure has no idea what the experience of unemployment, and especially long-term unemployment, is really like. Still, there is some evidence that unemployment benefits make workers a bit more choosy in their job search. When the economy is booming, this extra choosiness may raise the “non-accelerating-inflation” unemployment rate — the unemployment rate at which inflation starts to rise, inducing the Federal Reserve to raise interest rates and choke off economic expansion.

All of this is, however, irrelevant to our current situation, in which inflation is not a concern and the Fed’s problem is that it can’t get interest rates low enough. While cutting unemployment benefits will make the unemployed even more desperate, it will do nothing to create more jobs — which means that even if some of those currently unemployed do manage to find work, they will do so only by taking jobs away from those currently employed.

But wait — what about supply and demand? Won’t making the unemployed desperate put downward pressure on wages? And won’t lower labor costs encourage job growth? No — that’s a fallacy of composition. Cutting one worker’s wage may help save his or her job by making that worker cheaper than competing workers; but cutting everyone’s wages just reduces everyone’s income — and it worsens the burden of debt, which is one of the main forces holding the economy back.

Oh, and let’s not forget that cutting benefits to the unemployed, many of whom are living hand-to-mouth, will lead to lower overall spending — again, worsening the economic situation, and destroying more jobs.

The move to slash unemployment benefits, then, is counterproductive as well as cruel; it will swell the ranks of the unemployed even as it makes their lives ever more miserable.

Can anything be done to reverse this policy wrong turn? The people out to punish the unemployed won’t be dissuaded by rational argument; they know what they know, and no amount of evidence will change their views. My sense, however, is that the war on the unemployed has been making so much progress in part because it has been flying under the radar, with too many people unaware of what’s going on.

Well, now you know. And you should be angry.