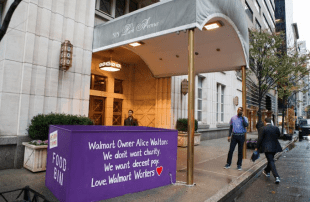 Photo Credit: The Other 98%

In response to the demoralizing food donation bins placed in some stores to help out its underpaid employees, Walmart workers have chained a massive donation bin in front of the luxury Manhattan apartment of heiress Alice Walton, daughter of Walmart founder Sam Walton.

Last year, a Walmart store in Canton, Ohio placed donation bins inside an employee break room, which read: “Please donate food items here so Associates in need can enjoy Thanksgiving dinner.” Employees snapped photos of the bins and shared them on social media to the outrage of many on the Internet.

Despite the outcry, a store in Oklahoma City, Oklahoma recently placed similar donation bins there and workers in Indiana are reporting that managers are organizing bake sales and encouraging workers to support their colleagues with food donations, causing a flare-up on the Internet.

Alice Walton is one of the biggest shareholders big-box store chain and one of the world’s wealthiest people. She is estimated to be worth $39 billion. The Walton family owns more than half of all Walmart stock.

Walmart is the nation’s largest private employer. Its 1.3 million workers are notoriously underpaid. The average hourly wage of an associate is said to be $8.81 an hour. An estimated 800,000 of Walmart employees making less than $25,000 a year.

Labor activists say that the placement of food drive canisters at some Walmart stores is evidence that the company is callously aware that many of its employees are struggling, but believes the solution to assisting those employees comes from donations from other low-paid employees. It has also been recently reported that Walmart workers need $6.2 billion in annual assistance in the form of food stamps, health care and other taxpayer-funded programs.

Later this week, Walmart workers are planning strikes to demand better wages and full-time work. Many Walmart workers are also protesting that they are being made to work on Thanksgiving Day this year. It is estimated that workers will hold protests at more than 1,600 Walmarts across the nation.

Cliff Weathers is a senior editor at AlterNet, covering environmental and consumer issues. He is a former deputy editor at Consumer Reports. His work has also appeared in Salon, Car and Driver, Playboy, Raw Story and Detroit Monthly among other publications. Follow him on Twitter @cliffweathers and on Facebook.