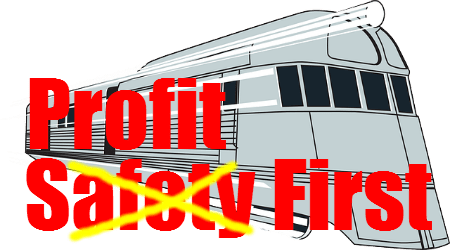 By Lee Fang
The Intercept

Positive Train Control, a technology system used to monitor trains and automatically keep them from reaching unsafe speeds, would likely have prevented the tragic Amtrak derailment earlier this week and many other train crashes in recent years, according to the National Transportation Safety Board and train safety experts.

But ever since Congress passed a law in 2008 requiring train companies to implement PTC by the end of 2015, the railroad industry has mounted a ferocious lobbying campaign to delay the rule.

Amtrak, like many other railroads, has been slow to comply. The federal government has been accommodating. And most recently, senators have been fighting primarily over how long an extension should be granted.

Train companies did not want to invest the needed funds to upgrade their systems. But they may have been feeling direct pressure from Wall Street, as well.

In one revealing exchange during an investor call in 2009, Jason Seidl, then a financial analyst with the Dahlman Rose & Co. investment bank, asked Wick Moorman, the chief executive of Norfolk Southern Corp., what “you guys can do in terms of lobbying” on the PTC. And given the costs of complying with the PTC rule, the analyst wanted to know how future investments might be impacted.

Moorman said he and other rail executives were busy working to “educate members of Congress as to what the implications of this legislation are.” Seidl encouraged Moorman to “further educate” them.

But the largest and most prominent lobbying group to work to delay and weaken the PTC rule was the American Association of Railroads, which employed a veritable who’s who of D.C. consultants and lobbyists, including:

— Linda Daschle, the wife of former Democratic Senate Leader Tom Daschle, who was paid to lobby on the PTC on behalf of the Association of American Railroads.

— The bipartisan lobbying duo of Max Sandlin and Vin Weber, both former congressmen, are registered with the American Association of Railroads to lobby on the PTC. Weber, an advisor to Jeb Bush, is also on the board of the American Action Network, a GOP dark money group that spends millions on election campaigns.

— Another bipartisan lobbying team, including former Sen. John Breaux, D-La., and former Sen. Trent Lott, R-Miss., is registered to lobby on behalf of the American Association of Railroads on PTC.

— The tax returns for the American Association of Railroads lists SKDKnickerbocker as a consultant for public relations and advertising throughout 2011 and 2012. SKDK is a public affairs firm led by senior Democratic staffers including former White House communications director Anita Dunn and CNN contributor Hilary Rosen. SKDK did not return call requesting information about what services the firm provided for AAR, or if they continue to count AAR as a client.

— Former National Transportation Safety Board Kathryn Higgins wasregistered on behalf of AAR to lobby on the PTC.

— Former Rep. William Lipinski, D-Ill, was registered on behalf of the AAR to lobby on PTC. Lipinski’s son Dan is now a member of Congress who serves on the House Transportation Committee.

Engineers have complained about the influence of the train industry over rail safety issues.

“The industry is now resisting, watering down and lobbying against implementing PTC technology that could alert the engineer earlier to take action or bring a train to a stop before passing a red signal or exceeding his authority, and most importantly, before a collision. Rejecting PTC would close our eyes,” said Stephen Bruno, vice president of the Brotherhood of Locomotive Engineers and Trainmen before an NTSB hearing in 2013.

As journalist David Sirota reported, in March of this year, the Senate committee that oversees rail issues “approved a bipartisan bill to delay by an additional five years the requirement for the new [PTC] technology. Among the sections of the system that were then still without the safety gear: the tracks stretching between New York City and Washington.”