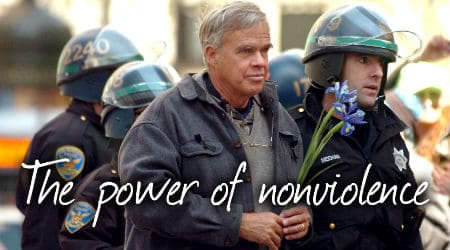 David Hartsough knows how to get in the way! He has used his body to block Navy ships headed for Vietnam and trains loaded with munitions on their way to El Salvador and Nicaragua. He has crossed borders to meet “the enemy” in East Berlin, Castro’s Cuba, and present-day Iran. He has marched with mothers confronting a violent regime in Guatemala and stood with refugees threatened by death squads in the Philippines. Waging Peace is a testament to the difference one person can make. Hartsough’s stories inspire, educate, and encourage readers to find ways to work for a more just and peaceful world. Inspired by the examples of Mahatma Gandhi and Martin Luther King Jr., Hartsough has spent his life experimenting with the power of active nonviolence. It is the story of one man’s effort to live as though we were all brothers and sisters.

“It has been my privilege to work with David Hartsough over the years and to be arrested and jailed with him for nonviolent civil disobedience. I highly recommend Waging Peace to every American…” —Daniel Ellsberg

Engaging stories on every page provide a peace activist’s eyewitness account of many of the major historical events of the past sixty years, including the Civil Rights and anti–Vietnam War movements in the United States and the little-known but equally significant nonviolent efforts in the Soviet Union, Kosovo, Palestine, Sri Lanka, and the Philippines.

“David Hartsough has lived an exemplary nonviolent life. Waging Peace highlights the numerous ways he has done this in many troubled parts of the world as well as in the United States.” —Martin Sheen

Hartsough’s story demonstrates the power and effectiveness of organized nonviolent action. But Waging Peace is more than one man’s memoir. Hartsough shows how this struggle is waged all over the world by ordinary people committed to ending the spiral of violence and war.

“When great events happen, such as the falling of the Berlin Wall, we must never forget that people like David Hartsough and many others have worked hard to prepare the ground for such ‘miracles.’” —Mairead Maguire, Nobel Peace Prize Laureate

David Hartsough is executive director of Peaceworkers, based in San Francisco, and is cofounder of the Nonviolent Peaceforce and an initiator of the World Beyond War movement. He is a Quaker and has a BA from Howard University and an MA in International Relations from Colombia University. Hartsough has been actively working locally and internationally for nonviolent social change and peaceful resolution of conflicts since he met Dr. Martin Luther King, Jr. in 1956.

Copies of Waging Peace will be available at this event. The book can also be purchased through PM Press.