Universal basic income is a simple idea that could have a radical impact on our society: give people enough money to meet their basic needs, providing everyone in the country with an income floor

We have an immense amount of wealth in the United States. Our GDP has grown by $4 trillion over the last 15 years. We have constructed enough homes to house every American, and we produce enough food to feed ourselves twice over. We have an abundance of resources at our disposal.

And yet, more Americans are struggling now than at any point in the last 50 years. Advances in technology are allowing us to do new and amazing things, but those advances have also disrupted the traditional labor model, providing less stability for American workers and allowing wealth to be concentrated into the hands of fewer and fewer individuals. Our nation is richer than ever before, but most Americans aren’t sharing in those riches.

Universal basic income is a simple idea that could have a radical impact on our society: give people enough money to meet their basic needs, providing everyone in the country with an income floor. Basic income could eliminate absolute poverty, support entrepreneurship and creativity, and allow every American to share in the prosperity that we have created together as a nation.

Over the past two years, universal basic income has picked up a lot of steam — countries around the world are now pursuing the idea, and there’s been a flurry of media on the topic. (See this September 2017 CNBC article about a local experiment.) However, most people in the United States still haven’t ever heard of it.

If we want to turn basic income into a viable policy solution, we need to change that. Raising awareness and support are the most effective ways to push forward basic income in the United States right now — an informed and supportive population will be key to passing any future policy.

At this month’s Other Voices monthly forum, you will learn the basics of universal basic income, where it is being tried and how we can move the idea forward in the U.S. 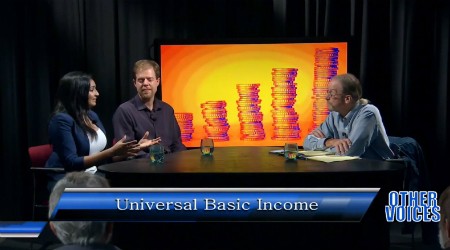