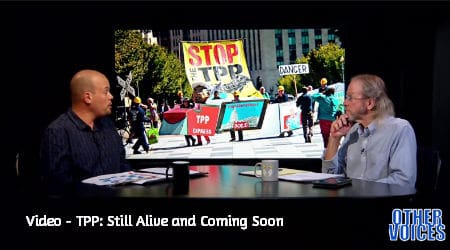 Twelve nations are still hard at work negotiating the final details of the Trans-Pacific Partnership. And they’re still behind closed doors.

Back at the end of July, news media were reporting on the failure of trade negotiators to finalize the Trans-Pacific Partnership, the ambitious “trade” agreement to be made among 12 Pacific Rim nations. But July was just a hoped-for target date. Meanwhile, the secretive negotiations continue on a near-daily basis as the final issues are resolved.

Negotiators expect to complete the agreement sometime this fall. Then it’s on to Congress, which will have no power to amend the agreement, thanks to the passage of “fast track” some months ago. Congress can vote only Yes or No. The struggle to get Congress to vote “no” will be major political effort. Get ready!

TPP is not a “trade agreement”. It is a Bill of Rights for corporations. Consider: