(Video) Surveillance is a Local Issue 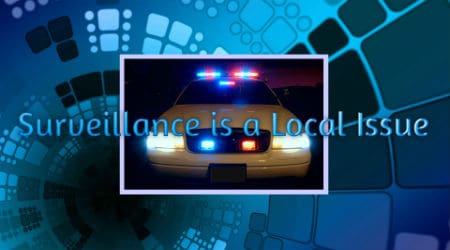 In San Jose, the police department caused a public outcry last year for buying a drone without notifying the public …

The use of surveillance technology is not limited to the Federal government. At an ever-increasing rate, local and county police agencies are purchasing and putting into use advanced systems to intercept cell phone calls, track license plates, and photograph just about anything that moves. In far too many cases, the technologies are purchased without review — sometimes without even the knowledge — of governing civilian boards like city councils. As the Palo Alto weekly pointed out,

“To date, Bay Area law-enforcement agencies have generally taken a better-to-ask-for-forgiveness-than-permission approach to their surveillance purchases. In San Jose, the police department caused a public outcry last year for buying a drone without notifying the public.”

But all of that might change as a result of grassroots efforts to bring some real democratic oversight and review to any purchase and use of such technologies by local agencies.

In June of this year, the Santa Clara County Board of Supervisors passed what has been called a “landmark” ordinance that would restrict future technology purchases by County law enforcement. It would also require public hearings — a critically important element — before any such purchases are made. The ordinance further requires that detailed policies regarding the uses of the technology and data security and retention policies be clearly spelled out before a purchase. Finally, since the ordinance does not refer specifically to any particular current technology, it is considered to be “future safe”, meaning as new technologies arise, the ordinance will still apply.

Now a similar ordinance has been introduced in Palo Alto by City Councilmember Cory Wolbach. Since the County’s ordinance does not apply to local police departments, it will be essential for each city to adopt its own laws. PPJC director Paul George spoke in favor of Wolbach’s draft ordinance when it was introduced and PPJC will be working to see similar legislation introduced in surrounding communities.

For this month’s edition of Other Voices Monthly Forum we’ll learn what technologies are being used by local police agencies and what the civil liberties concerns are with each. We’ll also explore the best ways to pass restrictions in Palo Alto and other local cities.