Click here for a written transcript of this program.

Chelsea Manning, Edward Snowden, John Kiriakou, Sibel Edmonds … there’s a long list of people who have revealed tightly held government secrets, in order to reveal government wrongdoing. As they face intense pressure from officials, they rely on grassroots to stand with them, to tell their stories to the public, to push for their release.

The folks who stood with Chelsea Manning now stand with another whistleblower, Reality Winner, as she faces overzealous prosecution by Trump’s Department of Justice.

Reality is currently jailed without bail, facing 10 years in prison, for allegedly giving a document vital to the public’s understanding of potential Russian interference in US election systems to a news organization. Her trial is scheduled to begin March 1, 2018, in Augusta, Georgia.

The document Reality is charged with leaking asserted the Russian government successfully broke into some number of election systems related to voter registration. Follow-up reports said about 21 states were affected, and that election officials still hadn’t been notified by the government whether their state was targeted. Like everyone else, they learned about the massive holes in their election security from The Intercept, an online investigative publication.

A Marine veteran and web developer, Jeff Paterson has spent the last eleven years as the project director of Courage to Resist, which provides legal and advocacy assistance to military war resisters. Jeff was the first enlisted soldier to speak out against the first Gulf War in 1990 when he refused to deploy to Iraq. Along with Rainey Reitman and Trevor Timm, Jeff founded Stand with Reality, to provide support to America’s latest whistleblower, much as Courage to Resist supported Chelsea Manning for so many years.

Recorded 11/7/2017. “Other Voices” is produced and recorded at the Midpen Media Center, Palo Alto, CA http://midpenmedia.org/ 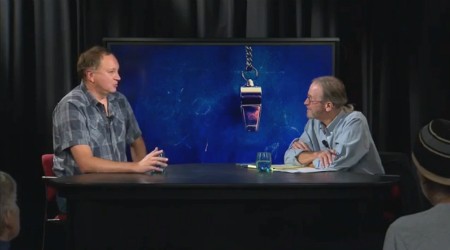