“You should resign, you should give back the money you took while this scam was going on and you should be criminally investigated by both the Department of Justice and the Securities and Exchange Commission.”

by Lauren McCauley
Common Dreams
As many hoped she would, Sen. Elizabeth Warren (D-Mass.) on Tuesday gave a thorough tongue-lashing to Wells Fargo CEO John Stumpf for what she described as “gutless leadership” for his failure to take responsibility for the recently exposed, years-longbanking fraud scandal.

“Since this massive, years-long scam came to light, you have said repeatedly, ‘I am accountable.’ But what have you actually done to hold yourself accountable?” the top Wall Street watchdog and Massachusetts senator asked during the U.S. Senate Banking Committee hearing on the bank’s opening of millions of unauthorized accounts.

“Have you resigned as CEO or have you returned one nickle of the million of dollars that you were paid while the scam was going on?” she asked.

Stumpf responded, “the board will take care of that.”

“I will take that as a ‘no’ then,” Warren continued. “Okay, so you haven’t resigned, you haven’t returned a single nickel of your personal earnings, you haven’t fired a single senior executive. Instead, evidently, your definition of ‘accountable’ is to push the blame on your low level employees that don’t have a fancy PR firm to defend themselves. That’s gutless leadership.” 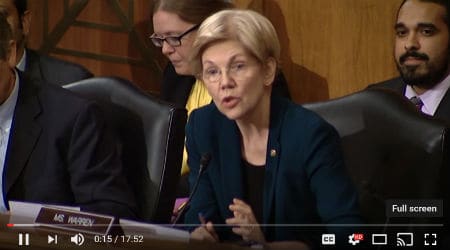