As the Trump era unfolds in California, fear of an Immigration and Customs Enforcement crackdown is disrupting the daily lives of immigrants and their families. In a state with 5.4 million non-citizen residents — and where nearly half of all children have at least one immigrant parent — the president’s promise to increase deportations may already be affecting the health and livelihoods of families, even those here legally.

But resistance to Trump’s inhumane policies is growing, especially in California. Numerous cities and counties have declared themselves to be “sanctuary” regions, meaning they will not detain people at the request of Immigration and Customs Enforcement (ICE). Santa Clara County and San Francisco have brought a lawsuit against the Trump Regime’s threat to withhold funding from these sanctuaries and local cities are joining the court action. Organizations are gearing up to increase their legal, housing and work assistance.

If the deportation mechanism can be resisted and stopped in California — the state with the largest immigrant population — perhaps the entire machine can be dragged down nationally.

For this month’s OTHER VOICES forum we talked with two people on the front lines of the resistance. We learn about the costs, human and social, of mass deportations and we look at the many forms of resistance that are sprouting up. Most importantly, we examine ways that individual activists can help to stop the deportation machine. 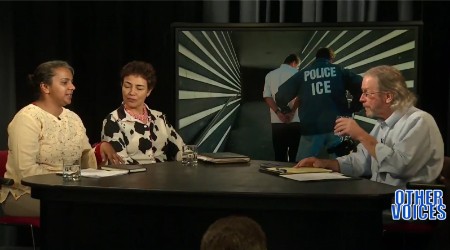