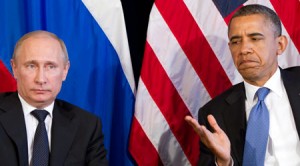 Arms control, missile defense, Syria and Iran, North Korea. Needless to say, problems between the US and Russia on those issues are reasons to have a summit, not to cancel one.

by Bob Dreyfuss
The Nation  http://bit.ly/1cvC5QH

Here’s a good way to start a new Cold War: accuse the other side of reverting to the Cold War and then cancel a summit meeting. (And there’s not even a U-2 incident.)

President Obama took the occasion of an appearance on a comedy show to accuse Vladimir Putin of being a cold warrior, noted the Wall Street Journal: “There are times when they slip back into Cold War thinking and Cold War mentality,” Mr. Obama said of Russia in an interview on “The Tonight Show With Jay Leno” on Tuesday night. “What I continually say to them and to President Putin, that’s the past.”

But it turns out that what’s past is prologue.

The obvious irritant is Russia’s decision to grant asylum of sorts to Edward Snowden, the contractor who leaked information about the National Security Agency’s spying machine. But it’s clear that underlying that excuse is that Obama and his diplomats, led by Secretary of State John Kerry, have been unable to make real progress on any of the key issues that might be talked about in what had been scheduled as a September summit in Moscow, namely arms control, missile defense, Syria and Iran, North Korea, and more. Needless to say, problems between the two countries on those issues are reasons to have a summit, not to cancel one. (Need we point out that there were plenty of summits during the Actual Cold War?)

Following a careful review begun in July, we have reached the conclusion that there is not enough recent progress in our bilateral agenda with Russia to hold a U.S.-Russia Summit in early September. We value the achievements made with Russia in the President’s first term, including the New START Treaty, and cooperation on Afghanistan, Iran, and North Korea.  However, given our lack of progress on issues such as missile defense and arms control, trade and commercial relations, global security issues, and human rights and civil society in the last twelve months, we have informed the Russian Government that we believe it would be more constructive to postpone the summit until we have more results from our shared agenda. Russia’s disappointing decision to grant Edward Snowden temporary asylum was also a factor that we considered in assessing the current state of our bilateral relationship. Our cooperation on these issues remains a priority for the United States, so on Friday, August 9, Secretaries Hagel and Kerry will meet with their Russian counterparts in a 2+2 format in Washington to discuss how we can best make progress moving forward on the full range of issues in our bilateral relationship.

Vladimir Putin may indeed be a vile thug with an authoritarian mindset. So? We don’t talk to him? Recent Russian actions, such as persecuting prominent dissidents and introducing odious ant-gay legislation, don’t pass the smell test, but since when did the United States cancel summits over human violations in Russia (or in Saudi Arabia, for that matter)? Russia’s support for President Assad in Syria may rankle American diplomats, but Russia has real interests there.

President Obama, again on Leno, didn’t flinch when Leno invoked the trump card of all criticism, Nazism, when referring to Putin’s anti-gay machinations:

“I have no patience for countries that try to treat gays or lesbians or transgender persons in a way that intimidate them or are harmful to them,” Obama responded, while stressing that “Russia is not unique,” and noting he’s had to balance his pressure over laws like these within larger relationships with several African nations as well.

But is that a reason to cancel an important summit?

The New York Times, in a churlish editorial (written before the cancellation was announced), suggests that maybe not going to Moscow is a good idea:

The partnership that Mr. Obama sought to build with Russia is seriously broken. Ever since Mr. Putin reclaimed the presidency in 2012, he has been profoundly at odds with the administration over the Syrian civil war, missile defense issues and further reductions in nuclear weapons. Meanwhile, Mr. Putin is a repressive and arrogant leader who treats his people with contempt, as the recent crackdown on gays and lesbians demonstrates. … There is no reason for Mr. Obama to attend unless Mr. Putin provides solid assurances that he is prepared to address contentious issues in a substantive and constructive way. Otherwise, what’s the point?

The point, of course, is diplomacy. But diplomacy is not something that happens exclusively at summits. The task for President Obama is engage with Russia, across the board and on all the issues at stake, constantly—so that summits mean something. Obama has to end this Cold War before it starts.