Urgent Action: Tell Congress to Rein in Trump Before He Bombs Syria

Urgent Action: Tell Congress to Rein in Trump Before He Bombs Syria

A Congressional letter to Donald Trump is currently being circulated for signing by Representatives. Urge your Representative to sign the Lofgren-Amash-Lee-Massie Letter to Trump: Seek Authorization from Congress Before Escalating in Syria.

A similar letter was sent to President Obama in 2013. That letter forestalled an imminent missile attack. Then, as now, such an attack threatens to lead to an escalation of the conflict — and a deepening of the illegitimate U.S. role in that conflict. An attack now may also lead to direct conflict between U.S. and Russian forces.

The letter will soon be closed to more signatures. Sign the letter to your Representative today. It will be emailed immediately to them.

Here’s the text of the Congressional letter:

We write to you as a bipartisan group of colleagues with a shared concern, as we did with the prior administration in 2013, and again in a letter to you last May. We strongly urge you to consult and receive authorization from Congress before ordering additional use of U.S. military force in Syria.

Your responsibility to do so is prescribed in the Constitution and the War Powers Resolution of 1973.

While the Founders wisely gave the Office of the President the authority to act in emergencies, they foresaw the need to ensure public debate — and the active engagement of Congress — prior to committing U.S. military assets. Engaging our military in Syria when no direct threat to the United States exists and without prior congressional authorization would violate the separation of powers that is clearly delineated in the Constitution.

We stand ready to consider the facts before us and share the burden of decisions made regarding U.S. involvement in the quickly escalating Syrian conflict.

Sign the letter today!
Thank you for taking action 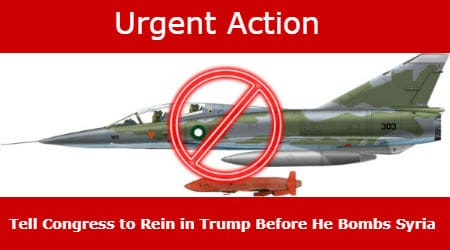