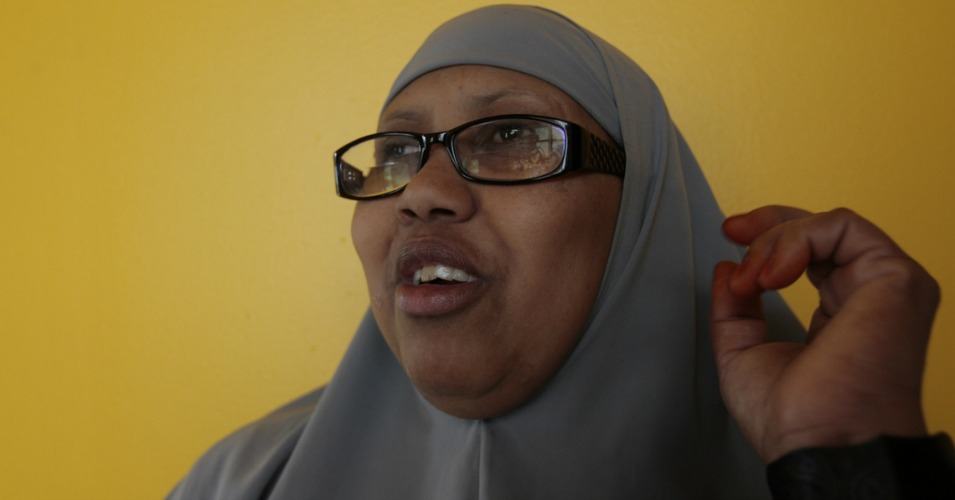 Katra Arale is among those in the Somali Diaspora who send money to family members in Somalia who are struggling to survive there. For 15 years, since arriving in the US at age 22, Arale has worked in janitorial services, cleaning a government building in Minneapolis. A mother of three children all born in the US, Arale says she’s glad to share her salary with her extended family in Somalia. Katra Arale sends at least $300 home every month. Sometimes, it’s as much as $400 or $500. The money helps her father, who is disabled, his wife, and their children. (Photo: Coco McCabe / Oxfam)

Let me introduce you to the world’s most powerful terrorist recruiting sergeant: a US federal agency called the office of the comptroller of the currency. Its decision to cause a humanitarian catastrophe in one of the poorest, most troubled places on Earth could resonate around the world for decades.

Last Friday, after the OCC had sent it a cease-and-desist order, the last bank in the United States still processing money transfers to Somalia closed its service. The agency, which reports to the US treasury, reasoned that some of this money might find its way into the hands of the Somali terrorist group al-Shabaab. It’s true that some of it might, just as some resources in any nation will find their way into the hands of criminals (ask HSBC). So why don’t we shut down the phone networks to hamper terrorism? Why don’t we ban agriculture in case fertiliser is used to make explosives? Why don’t we stop all the clocks to prevent armed gangs from planning their next atrocity?

Ridiculous? In fact it’s not far off. Remittances from the Somalian diaspora amount to $1.2bn-$1.6bn a year, which is roughly 50% of the country’s gross national income, and on which 40% of the population relies for survival. Over the past 10 years the money known to have been transferred to suspected terrorists in Somalia amounts to a few thousand dollars. Cutting off remittances is likely to kill more people than terrorists will ever manage.

During the 2011 famine in Somalia, according to a British government report, “British Somalis saved hundreds of thousands of lives by remitting money … reaching family members before aid agencies could mobilise”. Government aid agencies then used the same informal banking system – the hawala – to send money to 1.5 million people, saving hundreds of thousands more. Today, roughly 3 million of Somalia’s 7 million people are short of food. Shut off the funds and the results are likely to be terrible.

Money transfers from abroad also pay for schooling, housing, business start-ups and all the means by which a country can lift itself out of dependency and chaos. Yes, banking has its uses, as well as its abuses.

Somalia might be one of the poorest nations in the world, but its remittance system is widely seen as a model for other nations. Shifting e-money via the mobile phone network, hawala brokers charge only 5% interest, against a global average of 9% and an African average of 12%. In a nation held to ransom by well-armed thugs, and lacking almost all infrastructure, these remarkable people – often motivated as much by a desire to keep their country alive as to make money – supply tiny desert settlements all over the nation with scarcely any losses.

Hawala is one of Africa’s great success stories. But it can’t work unless banks in donor nations are permitted to transfer funds to Somalia. The US treasury’s paranoid rules threaten remittances from all over the world, as no bank wants to lose American business.

No one suffers more from al-Shabaab than the Somalis. It epitomises that combination of menace and absurdity satirised in Chris Morris’s film Four Lions. In the areas these few thousand men control, they have tried to ban samosas on the grounds that their triangular shape invokes the holy trinity. They whip women for wearing bras; have pledged to prohibit the internet; have imposed fundamentalist Wahhabi doctrines on a largely Sufi population; have tried to stop food aid; and have waged war on vaccination programmes, causing outbreaks of polio and measles. Yesterday they murdered another MP.

So you take a country suffering from terrorism, massive youth unemployment and the threat of famine, and seek to shut off half its earnings. You force money transfers underground where they are more likely to be captured by terrorists. You destroy hope, making young men more susceptible to recruitment by an organisation promising loot and status. Through an iniquitous mass punishment, you mobilise the anger and grievance on which terrorist organisations thrive. You help al-Shabaab to destroy Somalia’s economic life.

Compare this pointless destruction with the US government’s continued licensing of HSBC. In 2012 the bank was condemned by a Senate committee for circumventing safeguards “designed to block transactions involving terrorists, drug lords, and rogue regimes”. It processed billions of dollars for Mexican drug barons, and provided services to Saudi and Bangladeshi banks linked with the financing of terrorists. But there was no criminal prosecution because, the attorney general’s office argued, too many jobs were at stake. The outrageous practices revealed this week will doubtless be treated with the same leniency.

By contrast, the British government comes through this surprisingly well. While recognising that money could be transferred to terrorists in Somalia, its response is not to ban the remittance system but to try to make it more transparent. In 2014, working with people throughout the money chain, it ran a pilot project to improve the system’s security.

But the US has simply shut the door and walked away. It offers no alternatives (why can’t the Federal Reserve be used for transfers?), and no useful guidance about how existing remittances could meet its exacting standards. The OCC remarks that “the Somali situation is a terrible human tragedy that cannot be solved by bank regulators”. Perhaps not. But they can exacerbate it. The solution, it says, is “humanitarian assistance”.

Just two problems: the US isn’t offering any more than before; and replacing an autonomous system with state aid contradicts everything the government says about African development. If the result is a mountain of corpses, the OCC will neither know nor care.

Somalis, like many of the world’s people, are significant only when they are considered a threat. And if US policies make that threat more likely, well, that will be another administration’s problem. Until then, they count for nothing.

This article also appeared on The Guardian.

George Monbiot is the author of the best selling books The Age of Consent: a manifesto for a new world order and Captive State: the corporate takeover of Britain. He writes a weekly column for the Guardian newspaper. Visit his website at www.monbiot.com