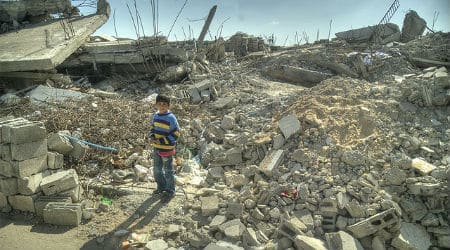 Citing a series of vicious military attacks in recent years coupled with severe shortages of water, medical supplies, and shelter created by an internationally-backed blockade, a new report issued by the United Nations warns that if current trends continue the Gaza Strip will be virtually “uninhabitable” within five years.

Home to approximately 1.8 million people, Gaza is often referred to the largest open-air prison in the world and the latest report, published by the UN Conference on Trade and Development (UNCTAD), is just the latest official assessment (pdf) to paint a devastating picture of life inside the sealed borders of Gaza which has now faced eight years of economic blockade and three large-scale military operations by Israel since 2009.

According to UNCTAD, military aggression and the ongoing blockade have accelerated the “de-development” of the Occupied Palestinian Territory, a process by which development is not merely hindered but reversed. The combined factors of war and economic suffocation, the report says, has shattered Gaza’s ability to export and produce for the domestic market, ravaged its already debilitated infrastructure, left no time for reconstruction and recovery, and accelerated the sharp decline in overall well-being of all who live there.

As summarized by the report, the metrics are devastating:

Well aware of the scale of the destruction and the plight of the Palestinian people living under occupation in the Gaza Strip,  over 150,000 individuals and dozens of humanitarian organizations last week told world leaders that the international community is long overdue in forcing Israeli government to lift their blockade on Gaza and allow its residents the right to rebuild their lives.