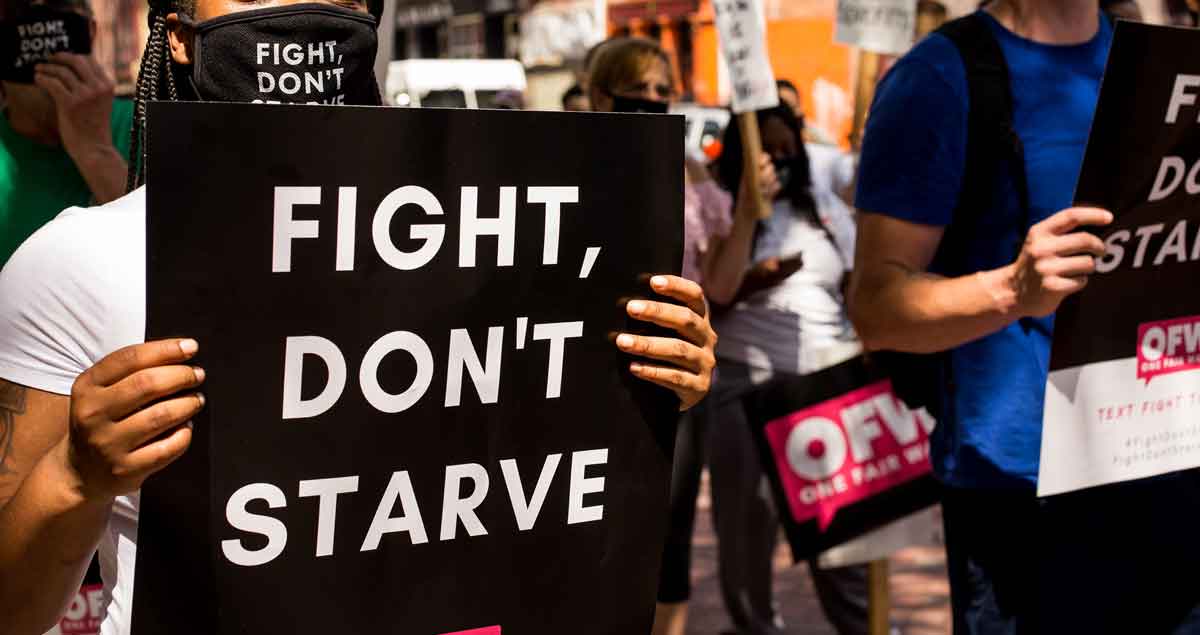 The decision by Congress and the Biden administration to let pandemic-related unemployment programs expire earlier this month will slash annual incomes across the U.S. by $144.3 billion and significantly reduce consumer spending, the Economic Policy Institute estimates in an analysis released Friday.

Drawing on recent research (pdf) examining the 26 states that prematurely ended the emergency unemployment insurance (UI) programs, EPI argues that the “best available evidence” indicates the benefit cut-offs thus far have resulted in “all pain and no gain.”

“By failing to extend unemployment benefits, Congress and the White House will harm working people struggling in the pandemic,” said Ben Zipperer, an EPI economist and co-author of the new report. “Annualized incomes will fall by $144 billion and consumer spending will drop by $79 billion.”

Approved by Congress last year to help jobless workers weather the pandemic-induced economic crisis, the emergency UI programs extended aid to typically ineligible gig workers and to those who had exhausted their eligibility for state-level benefits. Another program, known as Federal Pandemic Unemployment Compensation (FPUC), boosted unemployment benefits by $300 per week.

Despite pleas from worker advocates, the Biden White House and Congress—under the full control of the Democratic Party—allowed the programs to expire nationwide on Labor Day, stripping benefits from more than nine million people. Administration officials made clear last month that President Joe Biden felt it was “appropriate” for the $300-per-week federal boost to end as scheduled, even as the Delta variant wreaked havoc on the still-ailing U.S. economy.

In its new analysis, EPI points out that “the extended benefits were a significant reason why the number of people in poverty actually fell in 2020 despite record-level job losses.”

Republican leaders that terminated the emergency UI benefits ahead of their nationwide expiration on September 6 claimed the programs were dissuading people from returning to the workforce. But subsequent research demonstrated that the premature cut-offs did virtually nothing to boost hiring.

“Removing those income supports will increase poverty and will disproportionately harm people of color,” EPI warned Friday, noting that the impacts will be felt in every state.

“Overall, the resulting income and consumer spending losses of the most recent unemployment benefit cuts will be devastating to families struggling during the Covid-19 pandemic,” EPI said. “Congress should immediately restore the pandemic unemployment benefits and begin work on long-run reform of the UI system.”

All pain and no gain: by failing to extend unemployment benefits, Congress and the White House will harm working people struggling in the pandemic.

Annualized incomes will fall by $144 billion and consumer spending will drop by $79 billion https://t.co/8A9rYvSyvC pic.twitter.com/jOhKuDDolz

EPI’s report comes days after Rep. Alexandria Ocasio-Cortez (D-N.Y.) and several other House Democrats announced plans to introduce legislation that would extend the lapsed UI programs through February 1, 2022, with benefits retroactive to September 6.

“Expanded unemployment benefits have been a critical lifeline for millions of families struggling to make ends meet throughout this public health and economic crisis,” said Rep. Ayanna Pressley (D-Mass.), an original co-sponsor of the bill. “This pandemic is far from over and we must extend these critical benefits to help keep our most vulnerable families fed, safe, and housed.”

In a letter to House Speaker Nancy Pelosi (D-Calif.) and Senate Majority Leader Chuck Schumer (D-N.Y.) on Thursday, Ocasio-Cortez and a dozen other Democratic lawmakers also demanded the inclusion of systemic UI reforms in the party’s emerging budget reconciliation package.

“We are proud of the many provisions in the Build Back Better Act designed to promote economic opportunity, security, and fairness for all. For this reason, we believe that unemployment insurance reform is an essential component to this objective and must not be left out,” the letter reads. “A strong and responsive UI system not only helps our entire economy more quickly and equitably recover from future recessions, it is also an essential tool to help dislocated workers stay connected to the workforce and to provide for their families as they seek new employment.”