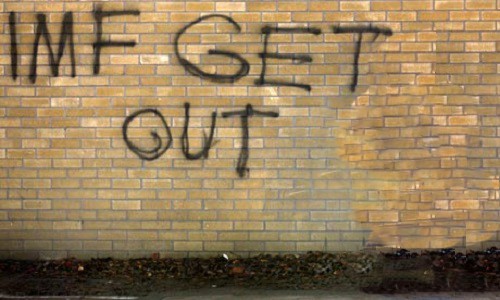 Ukraine’s economy had clearly entered a recession, its third since 2008, sometime in the latter half of 2013.  Some recent estimates of the likely contraction of the economy in 2014-15 have ranged from 5%-15% in GDP decline.

The ‘IMF Standby Agreement with Ukraine’ text released March 27, acknowledges the current severe economic instability of the Ukrainian economy. What it fails to acknowledge, however, is how the IMF package will further adversely impact that economy.

The IMF deal calls for $14-$18 billion in IMF financial support provided over the next two years, 2014-15. Another potential $9 billion reportedly will come from other countries, although in yet unspecified form. The European Bank for Reconstruction & Development apparently will provide $2 billion of that $9 billion. Presumably the US aid package of around $1-$2 billion now currently working its way through the US Congress represents another element of the $9 billion. The remaining $5 of the $9 billion non-IMF funding is yet unidentified.

The $27 billion total is well in excess of the $15 billion that was being talked about in prior weeks by the public press and more than the $20 billion Ukraine had asked the IMF for at the end of 2013—an indication that the economy has been deteriorating more rapidly than reported since the beginning of 2014.

In previous articles on the Ukraine economic situation a few weeks ago, this writer estimated that at least $50 billion would be needed to stabilize the Ukraine’s economy over the next two years. That figure may even rise by 2015.

The IMF Statement of March 27 addresses what it considers the most important economic weaknesses of the Ukrainian economy that require immediate and focused attention. Those weaknesses include the Ukraine’s current trade deficit, its rapidly declining international currency reserves, its fiscal budget deficit, and the budget deficit of its state-owned national gas company, Naftogaz.

The IMF estimates that the Ukraine’s trade deficit (exports minus imports) at around 9% of GDP ($17 billion a year) is due to Ukraine’s stagnating exports. What the IMF proposes in order to resolve this is to allow Ukraine’s currency to continue to ‘float more freely’. The Ukraine currency so far in 2014 has already fallen 26% to the dollar. So the idea is to allow the currency to decline still further. In theory, that will make Ukrainian exports more competitive and in turn reduce the trade deficit.  The problem is it will also result in a sharp rise in the cost of imports and therefore inflation for Ukrainian households. The IMF policy of promoting further currency decline, in other words, will mean even more domestic inflation, primarily impacting households, and therefore less spending by households on other goods and services.

Allowing the currency to decline further also suggests that IMF policy is for the Ukrainian central bank not to intervene aggressively in coming months to prop up the currency in global markets. That releases more of the IMF funds to service debt payments to western banks for the current and past loans. As the IMF statement indicates, “large foreign debt repayments loom in 2014-15.” The amount of debt payments due is estimated at $6.2 billion.  So Ukrainian households will in part pay for the debt payments to western banks by having to adjust to higher inflation and reduce their real spending.

Given that $6.2 billion of the $27 billion IMF total package will go to servicing debt payments to the west, it also means that only around potentially $21 billion of the IMF total bailout remains to stimulate the Ukrainian economy. But the key word here is ‘potentially’, since much less than the $21 billion will actually go into the economy—and will be offset by far more ‘taken out’ per the IMF deal.

A $21 billion net IMF injection is an economic illusion. Here’s why.

First, the Ukraine’s economy will decline as a result of the IMF package because IMF measures require major changes in Ukraine’s monetary and fiscal policies that will in net terms slow, not stimulate, the Ukrainian economy.

For example, the IMF statement calls for monetary policy that targets “domestic price stability while maintaining a flexible exchange rate”. What that means is that the central bank, the National Bank of Ukraine (NBU), will be required by the IMF to reduce the Ukraine’s money supply and thus raise domestic interest rates, as part of “an inflation targeting framework over the next twelve months to firmly anchor inflation expectations.”  Minus the economic jargon, what that means is that the NBU and IMF policy raising interest rates will slow the economy in order to offset expected inflationary pressures from imports that will occur from a further currency decline.  That interest rate hike policy designed to offset expected import inflation will further slow the real economy. And that translates into a further loss of jobs as businesses cut back production due to rising interest costs.

But that’s not the half of it. IMF measures will not only result in rising import inflation, but will produce even greater inflationary pressures as a result of IMF-dictated terms related to Ukraine’s natural gas.  Estimates are that natural gas prices will increase by 79% as a result of the IMF-dictated 50% increase in gas prices. Simultaneously, as gas prices escalate gas subsidies to households will be totally phased out over the next two years, according to the IMF deal.

That phase out of gas subsidies and 79% increase in gas prices means a $13 billion cut in real consumption over two years, 2014-15. That $13 billion reduces the remaining $21 billion of the IMF package still further, leaving only $8 billion in potential net remaining stimulus for the real economy from the IMF deal. However, that’s still not the entire picture of the IMF deal negative impact on the Ukrainian economy.

The IMF deal also calls for ‘Fiscal Policy’ reforms, or what it calls the need to “implement deeper fiscal adjustment” that will “reduce the fiscal deficit to around 2.5% of GDP by 2016.”  That 2.5% budget cut represents another $4.5 billion in combined annual Ukrainian government spending cuts (and/or tax hikes), presumably in each of the next two years.

The spending cuts will no doubt come out of government job reductions and wage cuts for remaining government workers.  It will also undoubtedly include deep cuts to the pension system affecting all retirees, which some estimate will mean cuts in pensions by up to 50% by 2016. It is possible that the $4.5 to $9 billion in government deficit reduction over the next 1 to 2 years will mean sales tax hikes for consumer households as taxes are cut for businesses, since the IMF statement of March 27 also calls for “measures to facilitate VAT (value added tax) refunds to businesses”.

In its March 27 statement the IMF has not spelled out the required job, wage, and pension cuts specifically.  It is clearly waiting for the Ukrainian interim government to inflict those economic wounds on itself and the Ukrainian people, following which the IMF Management and Executive Board will approve the offered deal.

To summarize, the IMF deal of March 27 calls for paying western banks and lenders $6.5 billion over the next two years in debt servicing payments. It additionally requires the reduction of household gas subsidies by another $13 billion plus the total phase out of gas subsidies. And it indirectly calls for the Ukrainian government to cut spending by at least $8 billion (2.5% of GDP) over the next two years—in the form of cuts in government jobs, wage cuts for government workers, and pension payment reductions of a likely 50% for retirees in general.

Add all that up, and not surprisingly it’s around $27 billion. That’s $27 billion of economic spending and stimulus taken out of the Ukrainian real economy per the IMF deal. In other words, just about the $27 billion that the IMF purportedly will provide to the GDP per the March 27 announcement.  Which means Ukrainian households will pay for the IMF’s $27 billion package with higher gas prices, elimination of gas subsidies, government job and wage cuts, and big pension payment reductions.

But $27 billion is not really an ‘even trade off’. It’s really a net negative stimulus for Ukraine due to the composition of the IMF deal. Keep in mind, the $6.2 billion in debt servicing payments outflow to the west will have absolutely no positive impact on Ukraine’s GDP. So, first of all, it’s really only the IMF net $21 billion ‘’in” vs. the Ukrainian $27 billion taken “out” of the economy per IMF requirements.  But even $21 billion ‘in’ vs. $27 billion ‘out’ is not the true net estimate.

The $27 billion taken out reflects a household consumer spending ‘multiplier effect’ that is much larger than the $21 billion net domestic Ukraine injection by the IMF.  If one assumes a conservative 1.5 multiplier effect, the amount taken out of the Ukrainian economy is more like $40 billion over the next two years—a massive sum given that the Ukraine’s GDP in 2012 was no more than $175 and was flat to stagnant in 2013.  Of course, the $40 billion ‘out’ is adjusted by the $21 billion ‘in’ and its multiplier effect.  But while the $40 billion ‘out’ will definitely occur, there is no guarantee the full $21 billion IMF injection “in” will actually happen in turn.

Some of that $21 billion will no doubt be ‘put aside’ by the Ukrainian central bank to replenish its foreign currency reserves, today at around only $10 billion or less. Some of it will be used to assist Ukrainian businesses to purchase European imports of intermediate goods, projected to rise in cost significantly as Ukraine’s currency continues to decline. And some of it will go to loans from the NBU to Ukrainian businesses that will hoard the cash and not use it to expand production. All this means that probably no more than half the $21 billion IMF net injection will actually affect the real Ukrainian economy. Given these ‘leakages’, the multiplier effects of the IMF injections will no doubt prove to be negative. It is not unreasonable to assume no more than a net $10 billion of the IMF’s $21 billion will get into the Ukraine’s real economy as a stimulus.

By absorbing the Ukrainian economy into the Eurozone, the latter is in effect taking under its economic wing yet another ‘Greece’ and ‘Spain’.  And as in the case of those latter economies, those who will pay will not be the bankers and multinational businessmen, but the Ukrainian people.  But that is the essential and repeated history and legacy of IMF deals globally for the last three decades.

Jack Rasmus is a Professor of Economics at St. Mary’s College and Santa Clara University. He is the author of Epic Recession: Prelude to Global Depression (Pluto Press – 2010) and Obama’s Recover: Recovery for the Few (Pluto Press – 2011).  He has been a business economist, market analyst, vice-president of the National Writers Union and elected local union president and organizer for various labor unions. His website is: www.kyklosproductions.com