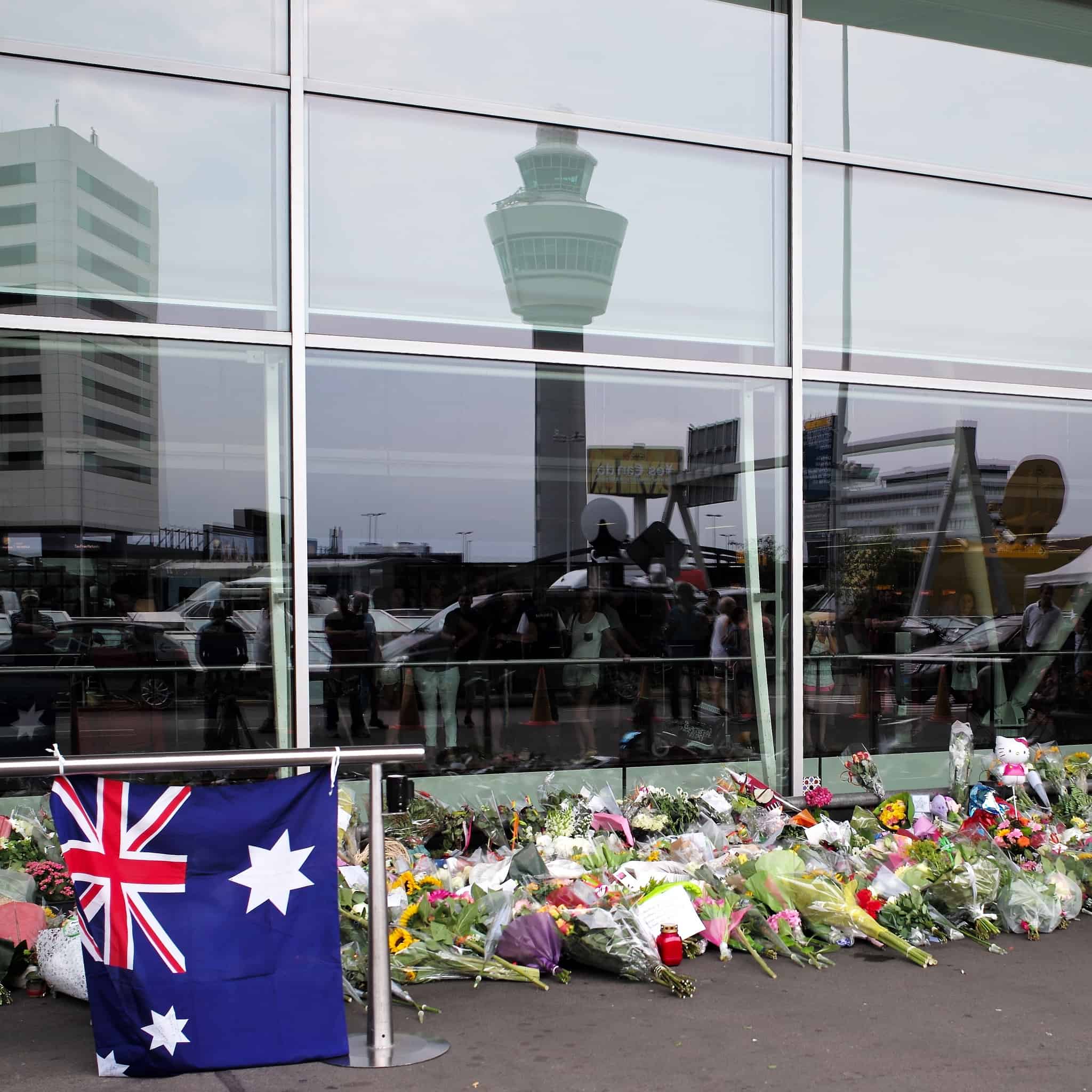 Amsterdam Airport: Flight Makeshift memorial at Amsterdam Schiphol Airport for the victims of the Malaysian Airlines flight MH17 which crashed in the Ukraine on 18 July 2014 killing all 298 people on board.(credit: flickr/cc Roman Boed)

The Cold War is perhaps not even remembered by this generation of Americans, beyond dim and distorted traces. Yes, the power alignments in the world have shifted, for example, by the rise of the BRICS and their opposition to Western finance capital. And yes, the rise of China offsets the demise of the old Soviet Union. The Vatican is no longer battling “godless communism.” Communism itself is a spent force.

But no new global paradigm has come to dominance and, in that vacuum, the old Cold War premises arise to fill the chatter-boxes of our media and cultural mentality.

Ukraine is the anvil on which the new Cold War thinking is heating up.

It’s impossible to understand the roots of the current Ukraine crisis over the downed airliner without understanding the past, but the past is remembered as cliché on all sides. We can agree, however, that the “new” Cold War began when Western strategists sought to expand their sphere of influence all the way eastward across the Ukraine to Russia’s border. That push, which seemed like the spoils of Cold War victory to the Western triumphalists, ignored two salient realities. First, eastern Ukraine was inhabited by millions of people who identified with Russia’s language, culture and political orientation. Second, since it was believed that the Soviet Union was “defeated”, the assumption was that Russia lacked the will and capacity to fight back. Though both assumptions were proven wrong on the battlefield in Georgia in 2008, the machinery of the West never stopped churning and expanding.

Eventually, Russia took back Crimea by force, in an offensive that was entirely predictable but seemed to shock the Western mind. Ukraine was broken along historic ethnic lines. For a brief moment, it appeared that a power-sharing arrangement might be negotiated. There was no reason that Putin would send Russian troops to war over the eastern Ukraine if peaceful coexistence was achievable. Putin accepted the ascension of a new pro-Western elected president in Kiev and called for a cease-fire and political settlement. But as often happens in proxy wars, the proxies drove the dynamics. Ukraine’s army marched east, claiming a sovereignty that the Russian-speakers refused to accept. Putin’s allies—the so-called “pro-Russian separatists”—refused to surrender and complained loudly that the Russians weren’t giving them enough support.

In the Western narrative, these Russian-speakers weren’t really Ukrainian at all, or they were Russians in disguise, or pawns of Moscow. That designation humiliated and angered them. In the Western PR offensive, the Russians trained them, advised them and perhaps even directed them to shoot down the airliner. And, of course, those alleged Russian agents were carrying out the orders of the Kremlin. Putin is hardly wrong when he says the catastrophe would not have happened if his calls for a cease-fire were heeded. Instead, a ten-day cease-fire was terminated by Kiev on June 10, surely with US support. No one has asked whether the US government lobbied with Kiev to extend the cease-fire instead of pressing their offensive eastward. The New York Times reported that “Ukraine’s President, Petro O. Poroshenko, let the latest cease-fire lapse and ordered his military to resume efforts to crush the insurrection by force.” If he had extended the cease-fire instead, the plane would not have been shot down.

It is insane for anyone to believe that Putin would want to shoot down a plane carrying over 200 hundred Europeans at a time when the European Union was debating whether to join the United States in imposing harsh sanctions on Moscow. What makes more sense is that no one in an official capacity anywhere wants to take the blame for an unplanned moral, political and diplomatic catastrophe. If Putin bears responsibility for the chain of escalation, so does Kiev and the West. In the meantime, the West will continue freezing its Cold War position and Ukraine’s armed forces will take their war towards the Russian border unless higher authorities restrain them. No one has asked if Western forces are advising or embedded with the Ukrainian military. Either way, the Kiev fighters can advance all they desire, but they cannot pacify the east or predict Russia’s next move. If they march into a trap, will the US feel obligated to dig them out?

The inevitable tightening of Western sanctions will push Russia to exploit the economic contradictions between the United States and European nations like Germany, and make Moscow increase its links with the BRICS countries, especially the Chinese powerhouse. As a sign of Russia’s trajectory, just before the airliner shootdown, Putin visited Latin America, where he promptly forgave 90 percent of Cuba’s $32 billion massive debt to the Russians, ending a two-decade dispute. Then Putin toured six countries and sat down to dinner with four Latin American presidents. The irony barely was noticed. The purpose of the 1960 US policy towards Cuba was to separate the island from the Soviet sphere of interest. Now it is the United States which is increasingly isolated diplomatically in its “backyard” while Cuba is secure in a new Latin America with Russian support. If Cold War thinking prevails, the Obama administration will continue funding illegal “democracy programs” aimed at subverting the Cuban state. That could persuade some in the Cuban leadership to resist normalization with the States, continuing a Cold War standoff of many decades.

Meanwhile, on the other side of the planet, America’s heralded new “pivot” to China is stalled in deep contradictions. Lacking any alternative to the Cold War model, the US is dangerously close to fighting two.

The question for progressives is how to construct a compelling alternative to the Cold War model as much of the world slides towards a new Dark Age of class struggle, climate crisis and religious fundamentalism appearing on many continents.

Tom Hayden is a former state senator and leader of 1960’s peace, justice and environmental movements. He currently teaches at PitzerCollege in Los Angeles. His books include The Port Huron Statement [new edition], Street Wars and The Zapatista Reader.