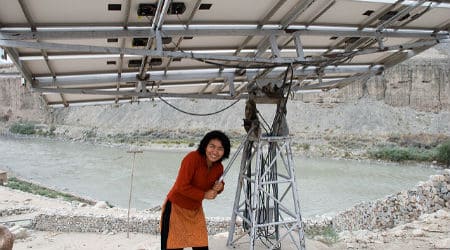 The World Trade Organization delivered a blow to India’s ambitious solar power program on Wednesday at the behest of the United States. So much for all that nice chatter about international climate cooperation back in December.

Responding to a U.S. complaint, a WTO dispute panel ruled that several provisions of India’s National Solar Mission were “inconsistent” with international trade norms. The point of contention? India’s solar plan, which seeks to install 100 gigawatts of solar capacity by 2022, requires a certain percentage of cells and panels to be manufactured locally.

These types of provisions, called domestic content requirements, are prohibited under most international trade agreements. Want to be part of the WTO? You gotta be open to trade — every time — or you’re guilty of the dreaded protectionism.

An estimated 300 million Indians don’t have access to electricity. The country’s solar plan, launched in 2010, aims to change that — while simultaneously combating poverty via job creation. And while India has indeed made strides in adding solar capacity, the U.S. argues that the Solar Mission’s domestic content requirements have led to a 90 percent decrease in its solar exports to India since 2011. The export losses led the U.S. to file a WTO complaint, which has been staunchly opposed by several U.S. environmental groups. In August of last year, the WTO panel released a preliminary ruling against the Indian domestic content requirements, and Wednesday’s ruling finalized that decision.

U.S. solar industry leaders praised the WTO panel ruling. (Recall that they stand to make more money by selling their equipment in India.) “This decision helps us bring clean energy to the people of India, as that nation’s demand for electricity rapidly grows,” Dan Whitten, vice president of communications for the Solar Energy Industries Association, told PV-Tech. This, of course, ignores the fact that domestic content requirements allow a country like India to provide themselveswith clean energy. (And to potentially do so with fewer emissions, as domestically produced solar panels don’t have to be shipped in from overseas — but this story isn’t exactly about what’s right for the environment.)

The ruling is a particularly harsh kick in the gut to climate cooperation, coming so soon after the (quasi-)promising results reached in Paris last December. “The ink is barely dry on the U.N. Paris Climate Agreement, but clearly trade still trumps real action on climate change,” said Sam Cossar-Gilbert, a program coordinator at Friends of the Earth International, in a statement.

You might be tempted to call the U.S. a hypocrite at this point: On the one hand, it led the Paris climate talks in all but name, while on the other hand, it pressed ahead with its WTO complaint against India. But this isn’t so much a demonstration of American inconsistency on the issue as it is of the disconnect between trade policy and climate policy more generally. If there’s hypocrisy to be found anywhere, it’s in U.S. trade policy itself: The United States supports some degree of subsidies for local renewables in nearly half of all states. India could likely file a WTO complaint against the U.S. if it wanted.

This isn’t the first time that trade agreements have cast a shadow over a domestic solar initiative. In 2012, for example, in response to a complaint filed on behalf of Japan and the E.U., the WTO ruled against the government of Ontario’s green energy program, which incentivized renewable producers to source goods and services from inside the province. As the free-trade logic goes, these types of local content requirements discriminate against foreign manufacturers.

Wednesday’s decision comes at a time of rampant coal and waste burning for India. In Delhi, air quality is now worse than in Beijing. While India will nowconsider an appeal to the WTO Appellate Body, it’s worth noting that when Canada appealed the Ontario WTO ruling, it lost.