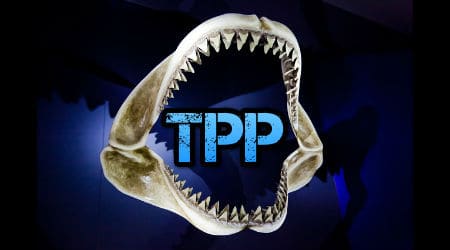 “During the tour, Ambassador Froman and Congressman Farr discussed the many ways the TPP, a centerpiece of the Obama Administration’s economic and foreign policy agenda, will deliver groundbreaking protections for the environment and support high-paying jobs in California, one of the country’s top exporting states.”

The Monterey Bay Aquarium is famous for its kelp forest shark tank. The Sierra Club couldn’t stand that, and issued a press release of its own, “Trade Representative Touts Shark-killing Trade Deal at Aquarium.” That press release pointed out:

The Sierra Club has reported on how the TPP would disrupt wildlife and marine life, including sharks. A leading driver of the worldwide depletion of shark populations is the international trade in shark fins, which are used in soups and alternative medicines in some Asian nations, including TPP countries. By eliminating tariffs, or import taxes, on shark fins in TPP countries, the trade pact would actually encourage further shark finning and spur the increased killing of sharks.

Right now sharks at risk of extinction are being killed for their fins. Rainforests that provide homes to critically endangered tigers are being slashed to make way for oil palm plantations. And at-risk elephants are being poached to feed increasing global ivory trade.

These threats to iconic, endangered animals would actually increase under the Trans-Pacific Partnership (TPP) – a controversial trade deal between the United States and 11 Pacific Rim countries that could come before Congress next year. The TPP would spur greater demand for products such as ivory, shark fins, and palm oil that kill endangered animals, by eliminating taxes (or tariffs) on trade in those products.

In “Environmental Groups Aren’t Buying The TPP’s Wildlife Provisions,” Think Progress describes how Defenders of Wildlife, Friends of the Earth, 350.org and other groups have joined the Sierra Club in opposition to TPP. Other groups opposing TPP include (but are not limited to) the Natural Resources Defense Council (NRDC), Greenpeace, Oil Change, Center for Biological Diversity, Institute for Agriculture and Trade Policy, Food & Water Watch, SustainUs, Center for International Environmental Law (CIEL), U.S. Climate Plan and Green America.

These groups have joined more than 1500 labor, environmental, family farm, consumer, faith and other organizations that are working to defeat the TPP.

Froman visiting the Monterey Bay Aquarium to promote TPP as protecting the environment is reminiscent of President Obama visiting the athletic clothing maker Nike last May to promote TPP as increasing American jobs. Nike pioneered the business model of exporting American jobs to countries like Vietnam. The post “Obama To Visit Nike To Promote the TPP. Wait, NIKE? Really?” pointed out that:

Nike is famous for using cheap (even sweatshop) labor outside of the U.S. to gain an advantage over companies that want to manufacture inside the U.S. They bring their product back here to sell at a high price, and then use various tax haven schemes to avoid paying taxes on its high U.S. profits.

In fact, while TPP rewards companies like Nike for offshoring jobs, it will force companies like New Balance that are still trying to make things in America to shut down operations here:

While the President visits Nike, New Balance is struggling to be able to keep some of its manufacturing in the U.S. Currently New Balance makes shoes in five factories in the U.S. Their executives say if TPP passes, lower tariffs on shoes made in places like Vietnam will force them to close their U.S. factories.

Shark finning, a practice driven by demand for shark fin soup, is contributing to a rapid depletion of sharks. After a shark’s fins are removed it is tossed back into the sea, usually alive and unable to swim. As the shark slowly sinks toward the bottom, it is either eaten alive by other fish or starves to death on the ocean floor.

Instead of cracking down on shark finning, the Trans-Pacific Partnership lacks any binding measures to curb this destructive practice. Moreover, by eliminating tariffs, or import taxes, on shark fins in TPP countries, the trade pact would actually encourage further shark finning and spur the increased killing of sharks.