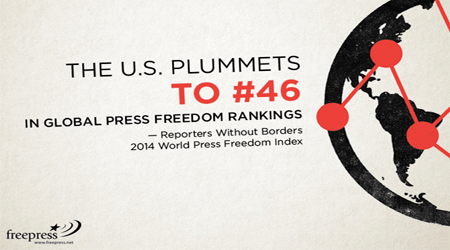 According to a new report from Reporters Without Borders, there was a profound erosion of press freedom in the United States in 2013.

After a year of attacks on whistleblowers and digital journalists and revelations about mass surveillance, the United States plunged 13 spots in the group’s global press freedom rankings to number 46.

Reporters Without Borders writes that the U.S. faced “one of the most significant declines” in the world last year. Even the United Kingdom, whose sustained campaign to criminalize the Guardian‘s reporters and intimidate journalists has made headlines around the world, dropped only three spots, to number 33. The U.S. fell as many spots as Paraguay, where “the pressure on journalists to censor themselves keeps on mounting.”

Citing the Justice Department’s aggressive prosecution of whistleblowers, including its secret seizure of Associated Press phone records, the authors write that “freedom of information is too often sacrificed to an overly broad and abusive interpretation of national security needs, marking a disturbing retreat from democratic practices. Investigative journalism often suffers as a result.”

The threats facing newsgathering in the U.S. are felt by both longstanding journalists like New York Times national security reporter James Risen, who may serve jail time for refusing to reveal a source, and non-traditional digital journalists like Barrett Brown.

Brown is a freelance journalist who has reported extensively on private intelligence firms and government contractors. He now faces more than 100 years in jail for linking to stolen documents as part of his reporting, even though he had no involvement in the actual theft.

The United States’ new press freedom ranking comes on the heels of a new and dangerous campaignagainst Glenn Greenwald and other journalists who have reported on the documents leaked by former NSA contractor Edward Snowden.

In recent weeks, high-ranking members of the intelligence community and members of Congress have called NSA journalists “accomplices” to Snowden’s leaks, and accused them of trafficking in stolen goods. And as Trevor Timm of the Freedom of the Press Foundation points out, these comments are only the most recent in a long line of attacks.

In 2012, after a series of high-profile journalist arrests at Occupy protests, the United States dropped 27 places in Reporters Without Borders’ World Press Freedom Index, landing in 47th place. The following year saw some progress as the U.S. climbed back up to 33rd place, but the last year has erased those gains.

The Reporters Without Borders study makes it clear that the struggles for freedom of expression and freedom of the press are global in scope, and deeply connected across borders. “Countries that pride themselves on being democracies and respecting the rule of law have not set an example,” the authors write.

Our press freedom ranking is important not just as a measure of the democratic health of our press, but also because hostility toward the press at home can legitimize threats to journalists abroad. We have to work in our communities and in Washington to fight for policies that protect all acts of journalism.