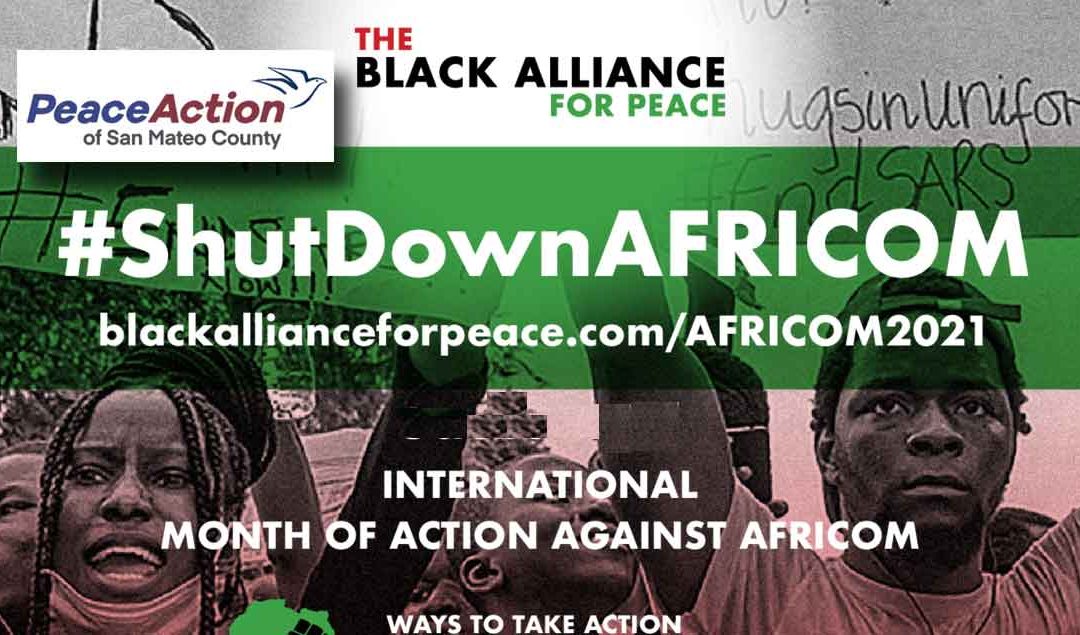 The Black Alliance for Peace is calling on allies all around the world to tell the U.S. to respect the wishes of African people, and de-militarize the African continent

October 1, 2021 marked 13 years since the establishment of the United States African Command (AFRICOM). The purpose of AFRICOM is to use U.S. military power to impose its control of African land, resources and labor, in a way that serves the needs of U.S. multinational corporations…but does little or nothing to serve the needs of the African people.

This October, the Black Alliance for Peace is holding an International Month of Action Against AFRICOM, with the aim of raising the public’s awareness about the U.S. military in Africa, and how the presence of U.S. forces exacerbates violence and instability throughout the continent.

On Sunday, November 14 (because there is surely no need to limit such action to just one month), Tunde Osazua, the U.S. Out of Africa Network Coordinator for BAP, will be the guest of Peace Action of San Mateo County on Zoom to talk about the Campaign Against AFRICOM. We will begin at 5 PM PDT (note the earlier-than-usual start time). Email smpa@sanmateopeaceaction.org to get the link.

The Black Alliance for Peace is calling on allies all around the world to tell the U.S. to respect the wishes of African people, and de-militarize the African continent – so Africa can start down the road to becoming a “zone of peace.”

Tunde Osazua is from South Africa, born to Nigerian parents. His activism began in college when he joined a campus prison divestment campaign, as well as a chapter of Students for Justice in Palestine. Tunde joined Black Alliance for Peace in 2017; learning about the struggles of the millions of Africans who came before him inspired him to get involved with movement work. “These are people who spilled their blood to advance the struggle of oppressed people,” he says, adding “that is why I want to contribute to the fight for the liberation of our people.” Tunde is also a member of the Atlanta-based Community Movement Builders, and the All-African People’s Revolutionary Party.

We look forward to seeing you on November 14 as we focus on the issue of the U.S. in Africa – its effects on the continent and how we can respond.