Trump’s religion test for immigrants is standard practice in Israel 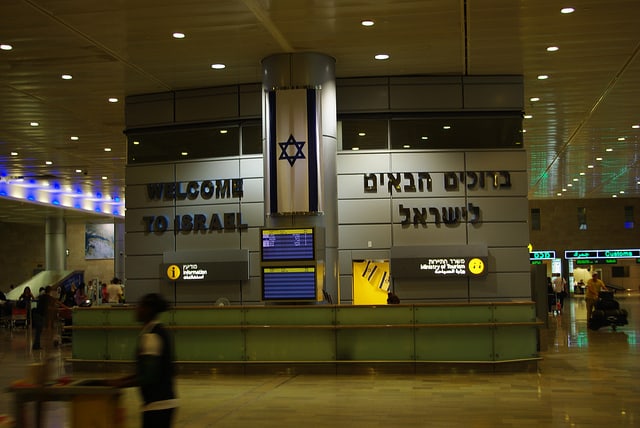 The widespread political condemnation of Donald Trump’s call for a ban on Muslims entering the United States and for surveillance of mosques was pretty great yesterday. American leaders left and right said that such policies are unconstitutional and counter to U.S. values. “Donald Trump is a race-baiting, xenophobic religious bigot,” Senator Lindsey Graham said emphatically.

But those leaders are strong supporters of Israel (“The pro-Israel community has been the heart and soul of my campaign,” Graham told Jewish Insider), and Israel practices many of the policies that Trump wants the U.S. to implement.

For instance, Israeli airport security officials routinely ask travelers what their religion isand often bar Muslims as a result. Last night, Chris Matthews was enraged by Trump’s recommendation that American immigration officials ask travelers if they are Muslim. But our own State Department has blasted Israel for denying “entry or exit without explanation”– notably to “those whom Israeli authorities suspect of being of Arab, Middle Eastern, or Muslim origin.” [emphasis mine].

Nour Joudah, an American who was deported from Israel, explained that Israel discriminates against anyone with an Arab name, at Electronic Intifada:

I think it is very clear that they want as few people with Palestinian origin in what they consider Israel and the occupied territories because they don’t even want the [Palestinians] that are there. So why in God’s name would they want us returning in any form or fashion, even if it’s for a limited period or for a visit? … They consider no one’s citizenship valuable if you have an Arab name, end of story.

Sadly, Israeli profiling is already being offered as a model for American ports: “What’s so great about Israeli security? Profiling.”

Israel also discriminates against non-Jewish refugees and immigrants. In an article titled,“Trump is no more racist than mainstream Israeli policies,” +972 states:

“[I]n Israel, there is already a law banning Muslims from immigrating — the ‘Law of Return’ which gives that right to Jews alone.”

Yousef Munayyer, who was born in Israel, explains that the discrimination keeps him from living with his own wife in the country of his birth!

Today, a Jew from any country can move to Israel, while a Palestinian refugee, with a valid claim to property in Israel, cannot…

[B]ecause my wife has a Palestinian ID, she cannot fly [into Israel]; she is relegated to flying to Amman, Jordan. If we plan a trip together — an enjoyable task for most couples — we must prepare for a logistical nightmare that reminds us of our profound inequality before the law at every turn.

Even if we fly together to Amman, we are forced to take different bridges, two hours apart, and endure often humiliating waiting and questioning just to cross into Israel and the West Bank….

Israeli law prevents my wife from living with me in Israel. This is to prevent what Prime Minister Benjamin Netanyahu once referred to as “demographic spillover.” Additional Palestinian babies in Israel are considered “demographic threats” by a state constantly battling to keep a Jewish majority.

Compare Netanyahu’s racist xenophobic rhetoric to Trump’s claims re Mexicans and Muslims. There isn’t much difference.

P.S. A related criticism of Trump is that he is endangering American citizens because his comments fulfill extremist claims about pervasive Islamophobia in the United States. Trump is “the ISIL man of the year,” Lindsey Graham said on CNN.

“We have young men and women in harm’s way around the world… The enemy will use [this rhetoric] against us… He’s putting our soldiers and diplomats at risk.”

“As I travel around the world, it is clear to me and how both our friends and our adversaries watch and listen to the discourse in the U.S., and I believe that comments such as those that we just heard are not constructive — and I would say that is putting it diplomatically.”

As did the Pentagon.

“Anything that bolsters ISIL’s narrative and pits the United States against the Muslim faith is certainly not only contrary to our values but contrary to our national security,” [spokesperson Peter Cook] said, using another name for ISIS.

But as all these officials can tell you, Israel’s discriminatory policies are also watched closely around the Arab and Muslim world and are held against the United States. Israel’s occupation of Palestine was a factor in the terrorist slaughter of 9/11 and last January in Paris. Israeli policies are said to have upset one of the San Bernardino killers, too. Donald Trump’s critics would be a lot more consistent if they urged Israel to stop persecuting Palestinians and Muslims because such policies endanger its allies.

Thanks to Adam Horowitz for much of this post.