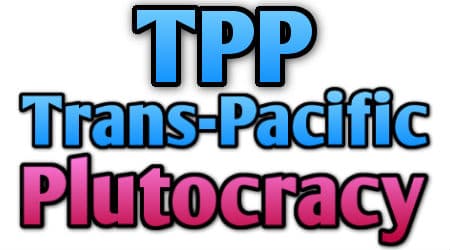 It’s NOT a trade deal. It’s a Bill of Rights for corporations.

President Obama expressed optimism at a Friday press conference that Congress can approve a sweeping Pacific Rim trade deal. Obama called the Trans-Pacific Partnership (TPP) “a big deal” and acknowledged that opponents in both parties make for “an interesting situation.”

Everything in the TPP that increases corporate rights and interests is binding, whereas every provision that is meant to protect the public interest is non-binding and is susceptible to get bulldozed by efforts to protect corporations.

The WTO authorized over $1 billion annually in trade sanctions against the United States unless and until the popular consumer policy [country-of-origin labeling] is weakened or eliminated.

The intellectual-property provisions in the Trans-Pacific Partnership agreement will drive up global drug prices and make it harder to treat diseases in developing countries, Médecins sans Frontières (Doctors Without Borders) says.

The Trans-Pacific Partnership (TPP) is more than 6,000 pages long, but does not mention the words “climate change” once. This is one of the many findings in a new report by leading environmental organization the Sierra Club.

In Nebraska, we’ve lost more than 5,000 family-sustaining manufacturing jobs over the past two decades since enacting bad trade policies like NAFTA and CAFTA.

The TPP State of Play: How We Defeat the Largest Trade Deal in History 12/1/15 Electronic Frontier Foundation

For now, there is no clear reading on how Congress will vote on the TPP’s implementing legislation, but it’s going to be a close vote. Our strategy will be two-fold: (1) To overwhelm Congress members with emails and messages from their constituents demanding that they vote down the TPP when the implementing legislation comes before them. (2) To turn the TPP into a household name for toxic digital policy, much like we did with SOPA.

The World Trade Organization has ruled that the “dolphin-safe” tuna label is an illegal trade barrier. The TPP is even more hostile to reasonable food labeling and food safety rules than the WTO. The TPP even specifically says that the trade rules apply to state labeling efforts, which could unravel all our efforts to pass GMO labeling at the state level.

Brad Adams, Asia director of Human Rights Watch, said last week that Vietnam appeared to “play nice during TPP negotiations, but now that the agreement has been signed, it is taking steps to tighten government control over critics.”

TPP is the latest salvo fired by global corporations against national and popular sovereignty, against Democracy itself. The key to understanding how TPP is about global corporations setting up their own global government is contained in its Chapters 27 and 28.

The president only needs 51 votes in the Senate because fast-track prevents a filibuster, but the House vote would be a nail-biter.

As we look at the text, it becomes clear that TPP is really a governance document. It is not just about trade … TPP is really about institutions and power – political, economic, and social power to decide who gains from globalization.

Of the Trans-Pacific Partnership, a trade deal affecting 40 percent of the global economy and currently being debated by Congress, Nobel prize winner Stiglitz said, “The irony is that the president came out and said, ‘This is about who makes the trade rules—China or the United States?’ … But I think the big issue is, this is about who makes the rules of trade—the American people, our democratic process, or the corporations? And who they’re made for, which is, for the corporations or for all of us?”
http://www.truthdig.com/avbooth/item/video_joseph_stiglitz_slams_obama_on_tpp_and_says_our_economy_20151112

As the Trans-Pacific Partnership (TPP) debate intensifies, a coalition of U.S. and Mexican labor and civil society groups are taking an unprecedented legal approach to protect workers’ rights that will test the strength of labor protections in international trade agreements.

The purported trade deal’s 6,194 pages of mind-numbing legalese actually cover a wide range of policy questions that have little to do with tariffs, imports, or exports — including a chapter on intellectual property that will likely dismay supporters of an open Internet.

TPP is about many things, but free trade? Not so much 11/9/15 Toronto Globe and Mail

[A]greements such as the TPP are about implementing policies that have nothing to do with comparative advantage, policies that are often designed to lead to higher consumer costs and concentrated corporate power…This isn’t a bug; it’s the point of the agreement.

Citizens will be forced to give up control of their destiny and will be stripped of the ability to protect themselves from corporate predators, safeguard the ecosystem and find redress and justice in our now anemic and often dysfunctional democratic institutions.

Some of the more dangerous threats to the public’s rights to free expression, access to knowledge, and privacy online are contained in the copyright provisions in the Intellectual Property (IP) chapter … If there’s one thing we can take away from this, it’s that the TPP’s secretive, lobbyist-controlled policymaking process has led to a deal that upholds corporate rights and interests at the direct expense of all of our digital rights.

“Members of the administration are flying around the country on taxpayer dollars saying what a good agreement it is, but if it is so good for Americans, why can’t we see the text?” Rep. Rosa DeLauro said during a news conference just outside the Capitol. Read the article

“We know we’re going to need regulations to restrict the emissions of carbon,” Stiglitz said. “But under these provisions, corporations can sue … all the governments in the TPP … for the loss of profits as a result of the regulations that restrict their ability to emit carbon emissions that lead to global warming.” Read the article

Copyright activists say Canadians could face lawsuits, fines or worse for ripping the latest Justin Bieber CD or uploading an animated GIF of Jose Bautista’s bat-flip under a new trade deal, and they’re calling on the newly elected Justin Trudeau to act. Read the article

The 12-nation trade agreement, which was finalized earlier this month, is not expected to go before Congress until next year. But Obama has become personally involved in selling the controversial pact to members of Congress and industry leaders, months ahead of what’s expected to be a tough vote. Read the article

If the leaks are any indication of what’s to come when full details are released, consumers, workers, and everyone concerned about the growing global “corporatization” of democracy, are in for a big shock. Read the article

In a blast email sent out Wednesday morning, senior Democratic Sen. Sherrod Brown — who represents the all-important swing state of Ohio — slammed the White House initiative in terms typically reserved for attack ads against Republicans. He declared that Obama’s proposal “is an enormous giveaway to huge corporations and CEOs and a massive sellout of American workers and jobs.” Read the article

At this point, too many details of the agreement aren’t public. Trade can obviously be a good thing for the country, but only if it is done the right way. And with TPP, what we know at this point is enormously problematic. Here are the 10 biggest unknowns about the TPP. Read the article