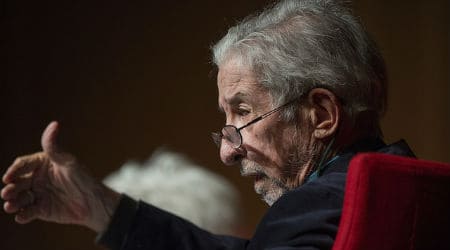 Tom Hayden was a political prodigy: a visionary in his youth, he foresaw the political contours of the emerging counterculture in the 1960s as if he had a crystal ball. In many ways, Hayden’s greatest achievement was one his earliest: by largely authoring the founding statement of a radically new student organization, the Students for a Democratic Society (SDS), Hayden gave political shape to a restless generation of young Americans eager to break with American practices of militarism and domination abroad and racism and repression at home.

The Port Huron statement, named after the city in Michigan where SDS leaders met in June 1962, presented a sharp break with political dissent in America. For the entire 20th century, leading up to the 1960s, radical politics in America was chiefly derived from European formulations. Left-wing Americans were deeply shaped by European socialism and Soviet (i.e., Russian) communism. The American Communist Party, by 1962, was bereft of ideas and morally bankrupt because of its allegiance to Soviet policies. The varieties of socialism then alive, if not flourishing, in the United States owed their collectivist character more to Europe than to the New Deal of 1930s Depression America. Throwing off the intellectual shackles of Europe, and giving life to an authentic American revolutionary thoughts, was nothing short of Hayden’s ambitious goal for both the Port Huron Statement and the SDS as a movement.

While the SDS faltered and failed by the end of the 1960s, riven by differences of tactics and interpretations, the ideals of the Port Huron lived on for decades. Even today, Hayden’s words can be read profitably by the activists engaged in the Occupy and Black Lives Matter movements.

In the wake of Hayden’s death on Sunday, what’s most worth remembering is his opening statement, titled “Agenda for a Generation.” Just as Bob Dylan spoke for young Americas in the early ’60s, so did Hayden and his colleagues. The introduction begins modestly but ominously: “We are people of this generation, bred in at least modest comfort, housed now in universities, looking uncomfortably to the world we inherit.”

What caused the discomfort? The self-evident contradictions between the actions and goals of the U.S. government and the ideals of America’s principles. Hayden and friends saw “disturbing paradoxes” between America’s stated aim of protecting the world from totalitarian domination by threatening anti-democratic forces with nuclear weapons that would also destroy the world. Similarly, Hayden wrote, “The declaration “all men are created equal … rang hollow before the facts of Negro life in the South and the big cities of the North.” Rather than uneasily accept these contradictions, as their parents did, Hayden’s generation—keenly aware of being part of the “wealthiest and strongest country in the world—wanted to aim higher. To accept anything less than America’s best, to Hayden, represented the road to ruin. So declared the Port Huron statement, “Not only did tarnish appear on our image of American virtue, not only did disillusion occur when the hypocrisy of American ideals was discovered, but we began to sense that what we had originally seen as the American Golden Age was actually the decline of an era.”

What should be done? How could dissent be turned into constructive action? Hayden saw an answer in the renewal of an old tradition of participatory democracy, sometimes known as “democracy with a small d.” The movement for renewal possessed, in Hayden’s view a sense of urgency, because of U.S. rivalry with the Soviet Union and the growing sense that nuclear war between these two “superpowers” might occur with little warning. Because of “the enclosing fact of the Cold War, symbolized by the presence of the Bomb,” young people knew, Hayden wrote, that “we … might die at any time.” The impending threat of mutually assured destruction through nuclear war, dramatically illustrated by the Cuban missile crisis of October 1962, gave credibility to Hayden’s impassioned words. A mere three months after the release of the Port Huron statement, the U.S. nearly unleashed its nuclear arsenal after the Soviet Union placed nuclear weapons on the island of Cuba, only 90 miles from Miami.

The existential threat of nuclear annihilation, and the everyday insults of racial segregation, combined to create an unacceptable situation for the new generation, also known as “baby boomers,” because, like Hayden himself, these young Americans were born after the end of World War II in August 1945. These baby boomers, while surrounded by prosperity, would not be seduced by it, Hayden insisted. Echoing the sensibilities of the existentialist philosophies Sartre and Camus, Hayden argued that the scale and scope of the problems generated at home and abroad by American power were impossible to ignore and demanded a radical response. “We might deliberately ignore, or avoid, or fail to feel all other human problems, but not these,” he wrote. Of the predicament facing his generation—subjugation of people of color, the threat of mass killing with impunity—reforms were not an adequate response. Only radical change could address the human predicament.

Time was running out, Hayden felt. “Our work is guided by the sense that we may be the last generation in the experiment with living.” Hayden’s sense of urgency, on its own, would make the Port Huron statement a remarkable document for youth today. For all of us today perceive existential threats to the human race, and to the entire planet. We all are implicated in a monumental experiment that threatens to run amok, or perhaps already has. That Hayden and his generation failed to achieve the radical transformation in American self-governance that they sought only highlights the value that their vision has for the youth of America today, for all Americans. Just as Hayden searched, as he wrote in the statement, “for truly democratic alternatives to the present, and a commitment to social experimentation with them,” we also search for alternatives to an American world order that seems, if not insane, than ineffective; if not immoral than unequal and deaf to the need for effective alternatives.

On the eve of a presidential election, Hayden’s death serves as a reminder also of the limits of electoral politics. The Port Huron statement called a for a revolution in political consciousness, not merely an alteration in the people in power. “Men [and women] have unrealized potential for self-cultivation, self-direction, self-understanding, and creativity,” Hayden wrote. “It is this potential that we regard as crucial and to which we appeal, not to the human potentiality for violence, unreason, and submission to authority.”

Such ideals go beyond party, beyond the organization of government, beyond technique and technicians. Hayden sought to reinvent the very ground of political life, transforming what remote and hollow forms of representative democracy into direct citizen engagement. He wrote, “As a social system we seek the establishment of a democracy of individual participation, governed by two central aims: that the individual share in those social decisions determining the quality and direction of his life; that society be organized to encourage independence ….”

Now more than 50 years since Hayden’s statement was created, many Americans, of all ages, share the same desire to openly revolt against the troubadours of expedience, and the masters of war, the architects of disenchantment. “We oppose the depersonalization that reduces human beings to the status of things,” Hayden wrote. “If anything, the brutalities of the 20th century teach that means and ends are intimately related, that vague appeals to “posterity” cannot justify the mutilations of the present.”

As in 1962, our moment doesn’t seem auspicious. Again, the words from Port Huron ring true today: humanity “desperately needs revolutionary leadership,” and “America rests in national stalemate, its goals ambiguous and tradition-bound instead of informed and clear, its democratic system apathetic and manipulated….”

And yet, Hayden stood for hope and so must we. Today we who must endure the mutilations of our own benighted present should honor Hayden and his SDS colleagues not merely by remembering their words, but by insisting that we shall convert their intentions into positive actions.