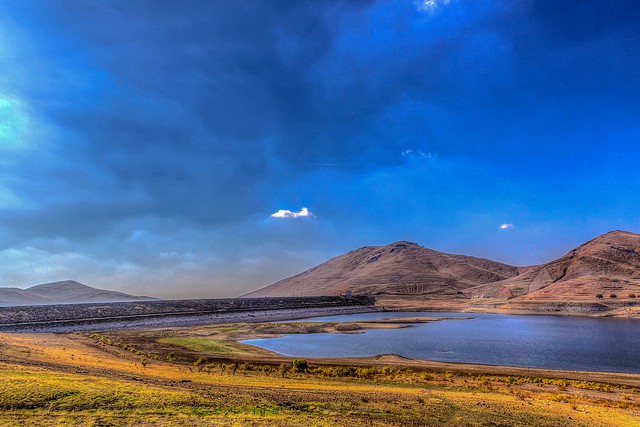 4% of Capacity. Photo by David Seibold/flickr.com

The bold headline of a recent Los Angeles Times editorialby the hydrologist Jay Famiglietti starkly warned: “California has about one year of water left. Will you ration now?” The write-up quickly made the social media rounds, prompting both panic and the usual blame game: It’s because of the meat eatersor the vegan almond-milkdrinkers or the bottled-waterguzzlers or the Southern California lawn soakers.

California’s water losshas been terrifying. But people everywhere should be scared, not just Californians, because this story goes far beyond state lines. It is a story of global climate change and industrial agriculture. It is also a saga that began many decades ago—with the early water wars of the 1930s immortalized in the 1974 Roman Polanski film “Chinatown.”

When my family first moved to the Los Angeles area, we spent years adjusting our lifestyle to be more in line with our values. Ten years ago, we stopped watering our lawn and eventually replaced the lawn with plants that were drought-tolerant or native to California. Three years ago, we installed solar panels on our roofs. Last year, we diverted our laundry runoff to our vegetable garden and fruit trees through a graywater system. We have replaced all our toilets with dual-flush systems to take advantage of local rebates, and we practice responsible flushing. We almost never wash our cars, and we shower less often in the winter. We are investigating rainwater barrels in our latest effort to be responsible stewards of our water. Yet none of our efforts to be an example to others have done anything other than make us feel morally self-righteous enough to wag our fingers at water wasters.

California’s water resources are being mismanaged, according to Janet Redman, director of the Climate Policy Program at the Institute for Policy Studies, a progressive think tank. “The management of water from California’s historic aquifer and snow and rivers and lakes doesn’t match the use right now,” Redman told me in an interviewon my show, “Uprising.”It’s a big understatement.

Even though Gov. Jerry Brown just imposed a series of mandatory water-conservation measuresin response to the emergency, most of those measures are aimed at individual users and restaurants. While it is crucial for residents to stop wasting water on the utterly useless tasks of car washing and lawn watering, “residential use in California is about 4 percent,” Redman told me. “Eighty percent is for agriculture.”

The truth is that California’s Central Valley, which is where the vast majority of the state’s farming businesses are located, is a desert. That desert is irrigated with enough precious water to artificially sustain the growing of one-third of the nation’s fruits and vegetables, a $40 billion industry.

Think about it. A third of all produce in the United States is grown in a desert in a state that has almost no water left. That produce is trucked from the West Coast all over the country in fossil-fuel-consuming vehicles, thereby contributing to the very mechanism of climate change that is likely to be driving California’s historic drought.

“It is not a place that agriculture, at the scale and at the scope that exists now, should exist,” Redman explained.

The food journalist Mark Bittman, writing in The New York Times in 2012, summed up the dire situation in California’s Central Valley: “For the last century or so, we’ve been exploiting—almost without limitation—its water, mineral resources, land, air, people and animals.”

When water allocations from the federal government were cut, Central Valley farmers began drilling deep into the ground to pump water out of the state’s precious, ancient aquifer. Now, the pumping has gotten so out of control that water is being tapped faster than it can be replenished by rain or snowfall, leading to some parts of the land literally sinking. What’s worse, California’s farmers are irrigating their lands with water from a 20,000-year-old reserve, depleting and probably permanently damaging a reservoir that formed in the Pleistocene epoch.

Shockingly, until recently, California did not even regulate groundwater use, unlike states like Texas. Anyone could drill a well on their property and simply take as much water as they needed for their own use—a practice that dated back to the Gold Rush.

Then, last year, the state finally passed the Sustainable Groundwater Management Act, aimed at regulating water use from the aquifer and other ground resources. But the law is weak: It allows local water agencies to regulate and manage groundwater pumping but gives the state the power to step in only if local control is deemed deficient.

In the meantime, our prized water heritage is being used to water lettuce, alfalfa and cantaloupes. But we have to eat, don’t we?

That reality is what farmers are banking on, and it is often enough to shut down debate on agricultural water use—but the drought-ridden devil is in the details. In an article on California’s Central Valley, one investment publicationgloats that agricultural production is an economic stabilizer “because people always need to eat” and lauds the multibillion-dollar profit potential of the region. In fact, the state’s rapidly disappearing water is flooding the investment portfolios of some of the nation’s wealthiest corporations by selling dairy products for export to Chinaand growing commodity crops like almonds.

There is also the familiar appeal to jobs. Central Valley corporate interests have dotted Interstate 5, which runs up and down the length of the state, with signsthat read: “No water equals no jobs.” That refrain is just another version of the coal industry’s mantra, “Stand up for American jobs,”in West Virginia.

In fact, many thousands of peoplehave already lost their jobs as a result of the loss of water, and most of those have been poor farm workers. But the workers were exploitedby big agribusiness to begin with, so the slogans referring to “lost jobs” really mean “lost profits.”

Many growers also grumble that rules enacted to protect the Delta smelt, an endangered species of fish, have diverted water away from farms.

But this crisis should not devolve into arguments pitting water against food, water against jobs, or even water against an endangered species. There’s only a little bit of water left to fight over, and the real question that gets lost in all the back-and-forth is: How do we live sustainably? After all, we need both food and water to survive.

What California and the nation needs is a long-term transition away from industrial agriculture toward sustainable local agriculture in which farmers grow and manage food only for those living within a small radius around them. The trend has already begun. Demand for locally grown foods is greater than ever as Americans realize the insanity of growing all our food in one small corner of the world and expending energy destructively to move it around. The idea of food as a profit-generating commodity is becoming obsolete, mostly because the planet cannot afford such a disconnected system.

Hand in hand with a renewable energy industry whose pillars are solar and wind power, a localized food system can help California transition away from unsustainably feeding much of the nation while generating green energy jobs to replace the lost farming jobs. The problem of the drought is inextricably linked to food production and climate change, so the solution must tackle these issues head on. There is no other way.

So let us stop blaming one another for the water crisis. As individuals, we absolutely should tear up our lawns, stop hosing down driveways, wash our cars less and so on, but we should do so knowing that that is only a tiny part of the answer. While it is crucial for us to conserve water in our personal lives, we need to fundamentally change the way the majority of California’s water is used.

As Famiglietti’s article warns us, we have only a year. Unless we take drastic steps toward transformation soon, we Californians may very well have to find a new home.