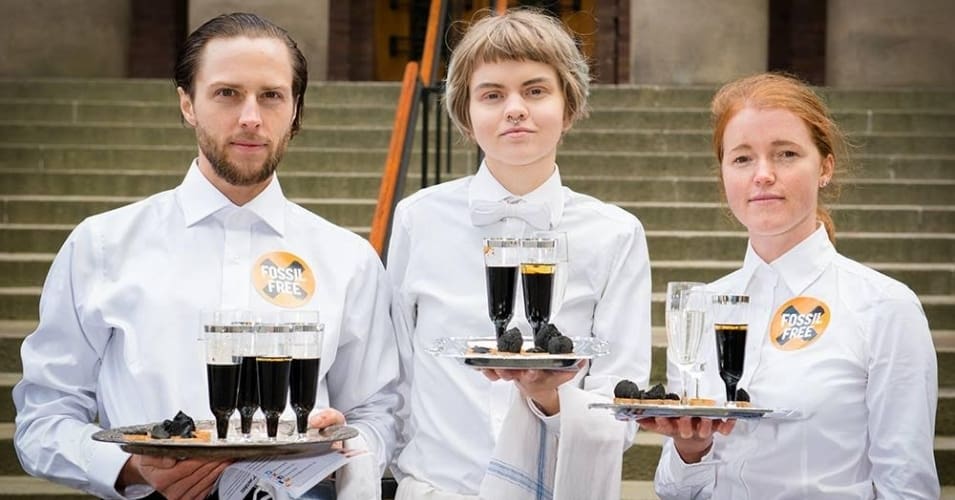 Members of Divest Nobel served oil drinks outside the Royal Swedish Academy of Sciences in Stockholm where the 2016 Physics Prize was announced on 4th October. (Photo: Divest Nobel)

It’s Nobel Week! A week during which the Nobel Prize uplifts the work of individuals who have made extraordinary achievements ‘for the greatest benefit to mankind’, the highlight of which are the prize ceremonies on Saturday. We love the Nobel Prize and how it honours outstanding work in science, literature and for peace.

Science made us understand the connections between the burning of fossil fuels and climate change, arguably the greatest threat humanity has ever faced. The science is very clear, we need to move away from a fossil fuel dependent society if we are to avoid creating a world largely uninhabitable for future generations.

The Nobel committee recognised the work of climate scientists in particular when it awarded the Nobel Peace Prize 2007 to the Intergovernmental Panel on Climate Change (IPCC) and Al Gore. The progress made on climate science since indicates that the situation is even more dire than what we knew at the time.

We’re now facing a reality where the business plans of the coal, oil and gas industry is in direct conflict with keeping global temperature rise to the limits set out in the Paris Climate Accord.

According to a recent report by Oil Change International, currently operating fossil fuel projects would take us beyond 2C of global warming, if they are allowed to run until the end of their projected lifetime. Yet, fossil fuel companies continue to spend billions every year to find and extract more and more coal, oil and gas.

If it is wrong to destroy the world we live in, it is equally wrong to profit from that destruction.

Responsible investors cannot profit any more from the destructive activities of this industry. We feel this is especially true for the Nobel Foundation whose mission is to highlight great scientific and humanitarian works.

With their proud history of promoting scientific excellence as well as the stated purpose of Alfred Nobel himself to work ‘for the greatest benefit to mankind’, the Nobel Foundation should be among the leaders towards a sustainable future.

The Nobel Foundation manages assets of SEK 3854 million (nearly $437 million). Due to a lack of transparency, it is unclear how much of it exactly is invested in fossil fuels but our research suggests holdings in some of the largest fossil fuel companies.

In response to our demand to pull their investments out of coal, oil and gas companies, the Nobel Foundation told us they intend to join the Principles of Responsible Investment (PRI) instead. The PRI is primarily an attempt of shareholders to convince companies to improve their environmental, social and good governance record.

It’s highly unlikely that a strategy of ‘active ownership’ will have any effect on an industry whose inherent core business leads to planetary destruction and hastime and time again chosen to ignore, and even tried to actively undermine, the scientific evidence on climate change.

That’s why we ask the Nobel Foundation to divest from companies that make more than 5% of their revenue from coal, oil and gas, and call on other institutions to follow suit.
The Nobel Foundation has to take a stand. If it decides to divest from fossil fuels, it would send a strong signal to institutions around the world that it is time to cut ties with the fossil fuel industry.

Eva Lenke is an administrator at a high school in Sweden and became involved in climate change activism to strive for a better world. She has been part of the Fossil Free network for the past two years, primarily with the Fossil Free Stockholm city campaign. After the campaigners succeeded in getting the City of Stockholm to divest from fossil fuels, they teamed up with the equally successful Stockholm University campaign to set up the Divest Nobel campaign. Follow her on Twitter: @EvaLenke